As 2014 winds down, I couldn't help but make a list of of our favorite moments of this year....some were bigger than others but each has been equally important to us. So without further adieu....


10) Switching the the car seat from the car bed: Remember when Isaiah used to travel in a car bed? 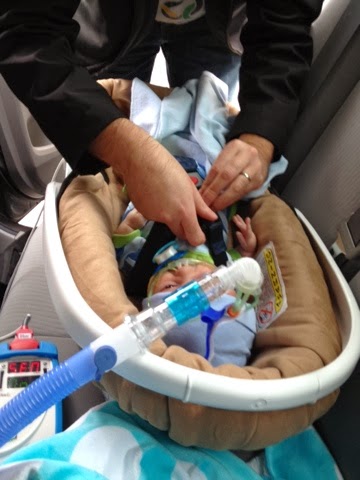 Early in the year, back in February, we made the switch from car bed to car seat and it was a major game changer.  No longer were we having to transition Isaiah so much (from the playpen to the bassinet and from the bassinet into the car bed, -all while attached to his constant c-pap and pulse oximeter- and then do it all again once we got to our destination.  It was exhausting.).  We were able to put him in his car seat in the house and just click him in (like a typical parent!).  Currently, we are working on transitioning Isaiah to his convertible car seat! Oh snap!

9) Learning to play: For Dave, Isaiah learning to play his drums was a big highlight of the year.  It is pretty fabulous.  This is the first video I got of him using a drumstick to hit the drums.
It may seem silly (I thought he was kidding at first), but it is highlight for sure.  It's hard for Isaiah to discover things on his own and the fact that he just hit the drum like he did when I handed him the stick was huge.  He's now learning to roll cars (instead of throwing them) too, so he's really developing in terms of play.

8) Toes, Toes, Toes:  He reached his toes for the first time and I caught it on video!  And it took months, but then he was able to eat them!!! 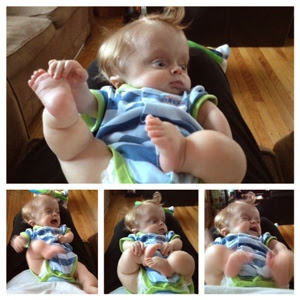 7) Beginning to wean Isaiah off of his machines:  Remember when Isaiah used to always have tape on his face and tubes up his nose?  Yeah, me neither. ;-) 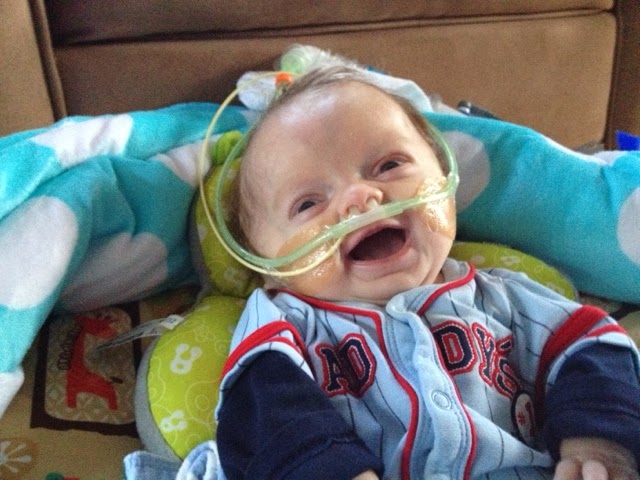 It's true though.  I used to cut duoderm (the tape that went directly on his cheeks) and tegaderm (the clear tape that held the tubes on his face) down to fit his little cheeks and then one of us would have to hold his arms down so he didn't yank it right off.  It was such a fight sometimes.  Weaning him off the machines has given us so much freedom.  Isaiah does still use his c-pap and pulse oximeter monitor at night, since he was diagnosed to have obstructive sleep apnea, but no tape is needed.  He pulls the cannula (the green tube) off from time to time, but for the most part he's a good boy.

6)  Remember when we were in our local paper promoting Wishbone Day?  How about when we were on ABC27 spreading OI awareness?!?!

Both were highlights for sure!  Being in the paper introduced us to two wonderful guys, Justin and Earl, who are both local and living with OI.  OI doesn't stop them from living wonderful lives, and that is one reason that they are great role models for Isaiah to look up to as he grows for sure!


5) Water Therapy:  It's been life-changing. 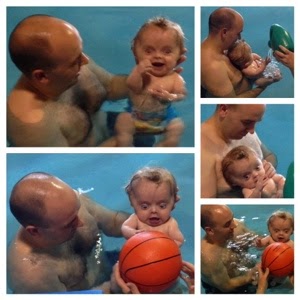 We wanted to start as soon as possible, allowing Isaiah to swim and move in the water is very good for his body- it exercises his muscles without any pressure on his bones, but we had to wait until Isaiah was no longer on the c-pap constantly.  Ever since the first time in the water, he's loved it.  Isaiah kicks and splashes.  He holds his head up.  He sits up on the ramp, chest-deep in the water, and reaches and pulls on toys.  We look forward to Isaiah taking steps in the water (that's a far off goal. Think 2016? lol)....but we know it's an activity that will be on the highlights list for years.

4) Taking out the NG tube was HUGE!  For anyone new to the blog this year, for Isaiah's first 5 months of life, he ate through an NG-tube.  In his old pictures, it's the yellow tube going in his nose. 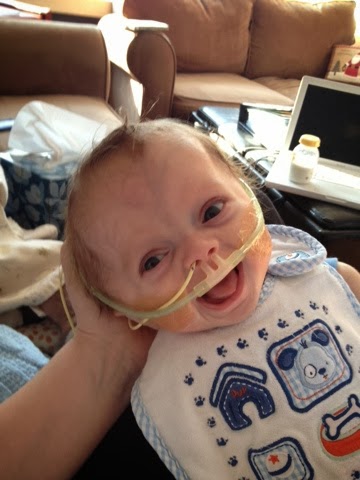 It led down to his belly.  We used to have to hook up his milk/formula to a machine that would feed him.  It started out because he used to breathe soooo fast.  He still does breathe quickly, but back then he was breathing an average of 100 breaths per minute, which would cause him to choke when he tried the bottle.  We had to wait for him to get stronger, so we did.  Teaching him to drink from a bottle wasn't easy.  It took time and patience but once he took to it....on Christmas Eve of 2013 I believe?  From then on he just got it.  Pulling out that tube for the last time was life-changing.  No more bags to fill or tubing to prime.  No more trying to talk to Dr B to figure out the correct number of mL of formula to feed Isaiah at each feeding.  No more talk of surgically placing a g-tube; he doesn't need it!

3)  Being featured on Go Shout Love:  Those ladies.  Those lovely loving ladies. Shouting love for babies with rare conditions.  They helped us in so many ways. 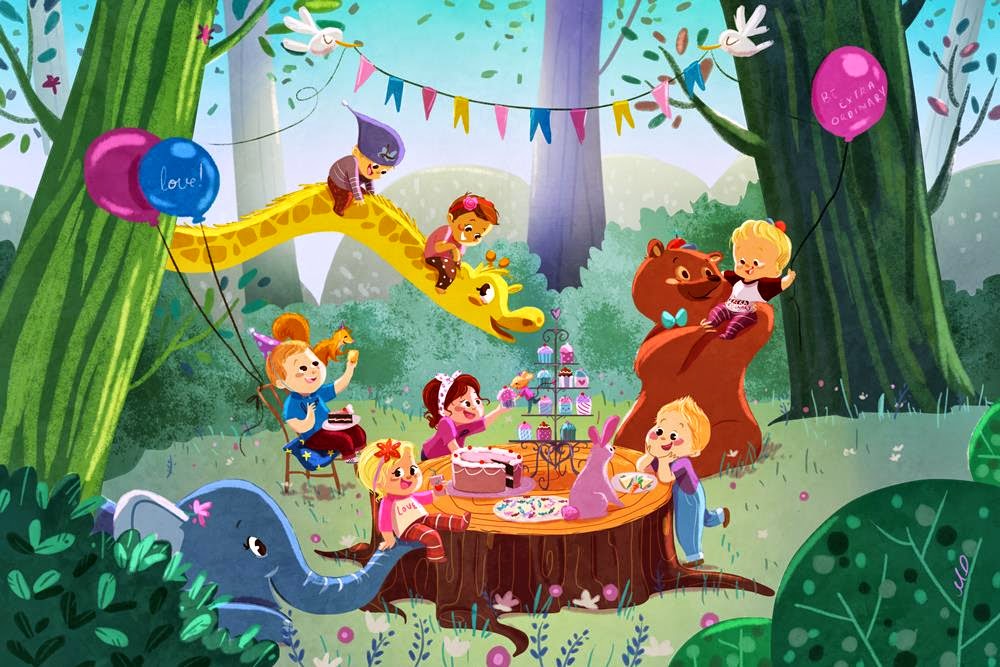 This was done by Monique Dong.  It is an illustration of all 7 of the Go Shout Love kids of 2014.

They raised money for us to help with medical/travel expenses.  They talked to Orbit Baby and got an amazing car seat donated to us.  They showered us with love.  They helped to raise awareness of OI!  They practically introduced me to another OI mom from another state (who I introduced to one of our support groups).  They introduced us to 6 other families fighting rare conditions and showed us how similarly we live our lives.  And then they spoiled all of us throughout December with the Go Shout Love 25 Days of Christmas.

2) Wishbone Day:  For those new to the blog, Wishbone Day is the international day of awareness for Osteogenesis Imperfecta.  It's a day to wear yellow in honor and in celebration of those living with OI.  This year, with the help of my awesome friend Fallon and Senators Folmer and Smucker, we made Wishbone Day official in the state of Pennsylvania.  We have an official Seal and everything! 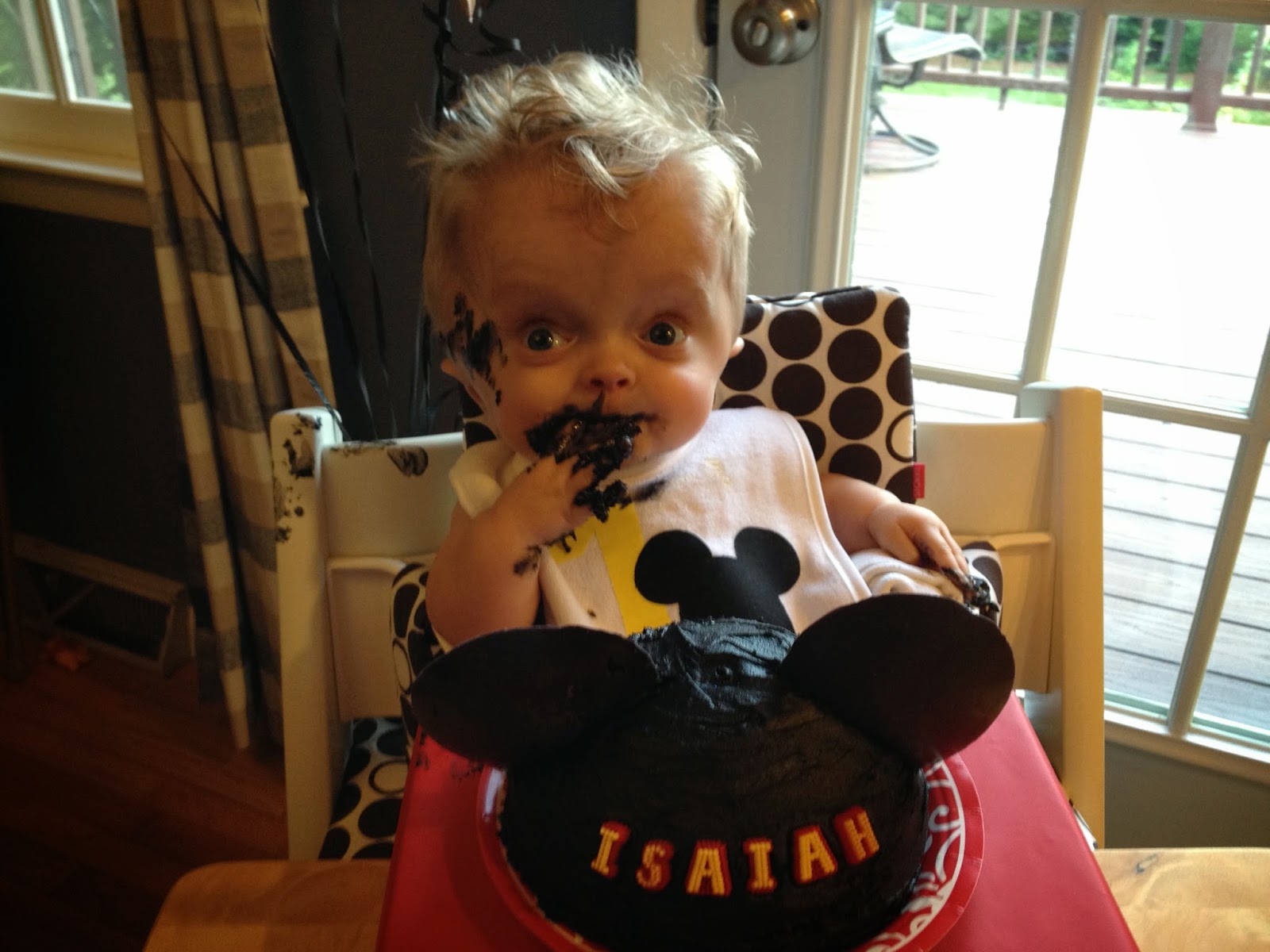 Especially during Isaiah's first 6 months of life, Dave and I were on edge.  In the back of our minds, we were scared Isaiah would die.  From respiratory failure, aspiration, pneumonia, or something similar.  I once almost had a nervous breakdown over hiccups.  I wish I was kidding.


His birthday was big.  Every first birthday is a major milestone, but when you had thoughts and fears of your baby not living?  When your baby turned blue right before your eyes at 1 month old?  Thought that he may not hit that milestone and then he did?  HE DID!  Wow!  It deserved to be celebrated and celebrate we did!  80 people came and celebrated with us. 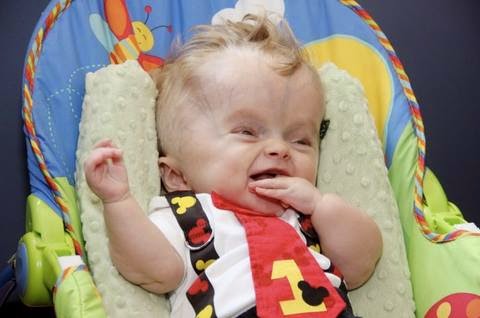 Thank you so much for supporting and loving us throughout 2014.  Tonight, we will not just be excited for another year to begin, but we will be celebrating the year that has passed.


Cheers to 2014! Have a wonderful and safe night tonight!
Posted by OIbelieveinIsaiah at 8:58 AM