Wow, we had a really great weekend (and sure didn't expect to).  Isaiah had some rough moments, but who wouldn't just days after surgery?  And seriously, they were few and far between.

He was actually so chipper on Saturday that we decided to introduce Isaiah to Baby Mum Mums.  They are little rice biscuits that dissolve easily in a baby's mouth. The faces he made while discovering his first Mum Mum were entertaining to say the least... He only got through about half of one, and he gagged some when it was on his tongue (the tech that performed Isaiah's swallow study said that's common when introducing new textures/foods), but he really seemed to enjoy it.

We were very excited about it, and although we should have waited a day or so, we decided to instead jump on letting Isaiah try some peas.

He was very intrigued at first.... 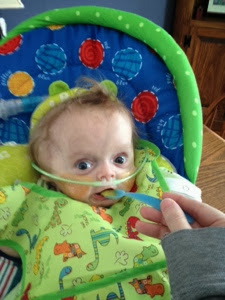 But it was obviously that it was a no-go... 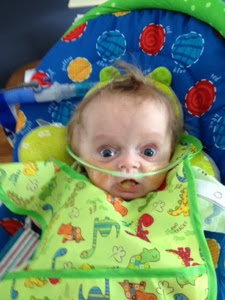 Mom, what the heck are you guys doing to me?

Now that he's had no reactions that would make us think he's allergic, it's two days later (don't let the same bib fool you) so I jumped on introducing sweet potatoes to Isaiah. 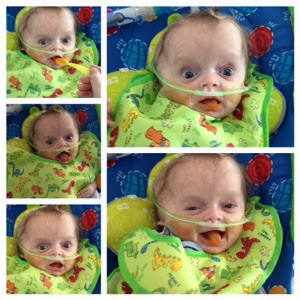 As you can see, he was both shocked and in love with sweet potatoes.

He made a big mess of things, but that's normal for any kid, but especially one who's only used to eating through a tube and by a bottle.  Hopefully in the next few weeks, with more practice, he'll get the swallowing part of eating veggies down.  An interesting experiment that I tried was to put some sweet potato on Isaiah's pacifier. When doing that, he could swallow the potato with minimal gagging.  (That's when he smiled!)  I know that's it's not a recommended practice, but it makes me want to give peas a second chance, maybe it was the spoon throwing him off (so once he masters that tool, he will be seeing peas again!).  I don't know, Dave and I are new to this, so we're learning with Isaiah.   #newparentproblems


Besides the exciting world of solid foods, we've also started weaning Isaiah off of his C-PAP.

We were going to wait until after Pam this week, but he was doing so good (and he conveniently pulled all the tape off of his face) that we decided that there was no better time than the present. 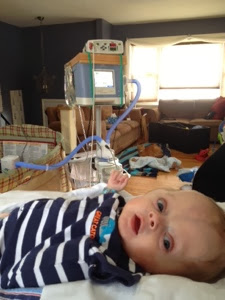 Isaiah had a great 15 minutes off of his C-PAP.  His oxygen saturation level stayed between 98 and 100% which is fantastic!  His pulmonologist had said if Isaiah goes below 95% that we'd have to go at a slower pace so we're loving that he didn't touch that during his first official time off his machine.

We also noticed that Isaiah's heart rate stayed completely normal for his time at rest.  We're watching that like hawks because we know it's common for it to rise a bit when overcompensating to keep the O2 level up.  We don't want him working harder.  We want this to be easy for him. 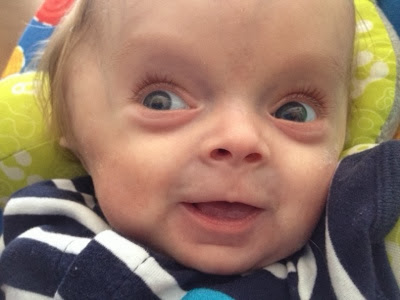 We've done this first 15 minute ween 4 times already, 1 more time today and then we're on to 30 minute blocks of time off of the C-PAP! 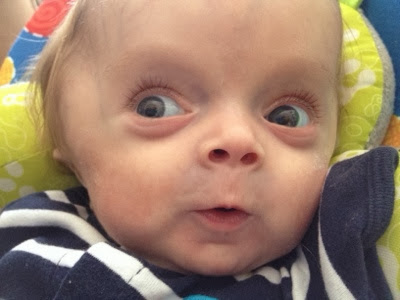 Isaiah says Woo Hoo! Tube/Tape-Free living is in my future!

I just love that little nose!  We'll keep you updated on his continued progress with foods and saying goodbye to the C-PAP.  We'll also be checking in this week from DuPont.  Isaiah will be putting his port to good use and getting his next dose of Pam starting tomorrow.  He also has a follow up appointment with the surgery team to check on how things are healing.