We had the most magical Christmas!  It was filled with family, food, fun, and so much love!

For 25 days of December, we were blessed by Go Shout Love.  We received so many thoughtful gifts.  We could tell that the GSL ladies and those that donated really have gotten to know our family based on the gifts we received.  Gifts that Isaiah could play with...gifts that I could wear...handcrafted gifts...gift cards that made gift giving easier... Thank you so much Go Shout Love!! <3


But do you know what Christmas wasn't full of?  Any broken bones (at least as far as we know).  OI, we thank you for letting us enjoy our Christmas season.  We thought you were going to spoil things on Christmas Eve when Isaiah took a topple forward (while trying to sit up up UP) on our neighbor's couch, but no, after a cuddle and a nap, we were back to normal.  Woo Hoo!

Christmas morning was so much fun.  Dave and I were excitedly waiting for Isaiah to wake for his bottle so we could bring him down to our family room to show him that Santa came.  Isaiah finally woke at 5:30 (ha), but he was sure not a fan of our plan.  We put his singalong on the tv and I am sure that's the only reason he didn't cry. #notourbestparentingmoment 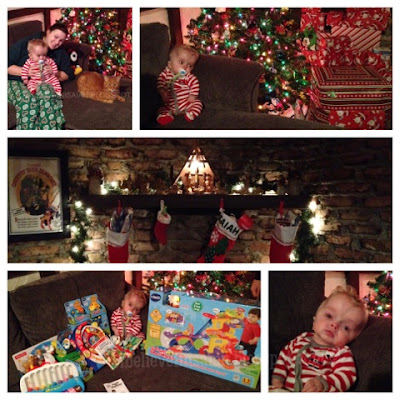 We missed our family traditions last year and we were eager to start them with Isaiah.  There's a reason that we wanted him up early though- we had to hit the road!  Breakfast at Baba's! 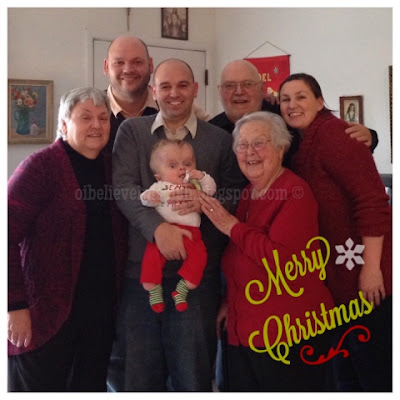 (side note: Isaiah's hit a growth spurt!  All of a sudden none of his 0-3 pants fit anymore.  They had been fitting perfectly.  Woo hoo! Time to finally clear those last 0-3s out of his closet.)

After a wonderful Christmas morning at Baba's house, we headed to Nan Nan and Pop Pop's house.

There Isaiah was greeted by a HUGE pile of presents (spoiled boy). 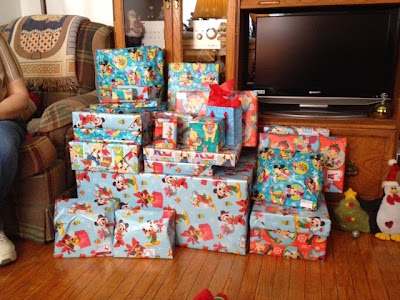 He was exhausted from the early wake up and lack of naps so this year daddy and I had to open most of them.  After almost all of the presents were opened, we had dinner...which included practically all of Isaiah's favorite table foods- corn, mashed potatoes, carrots, pudding, ice cream, cookies....spoiled. 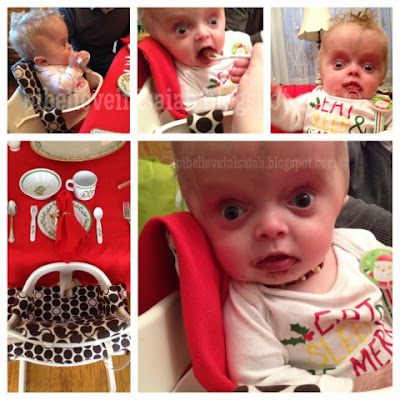 I loved the fact that Isaiah had his very own spot at the table.  Such a big boy! 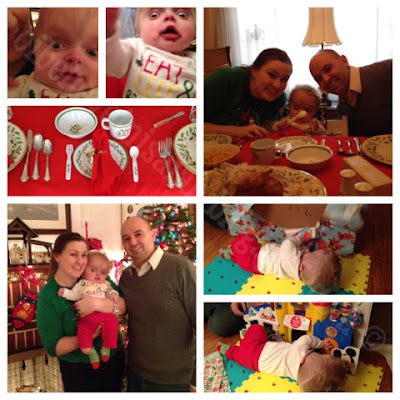 After dinner, Isaiah opened his big gift.  It is a big Magic Kingdom (Disney World) Little People toy.  Isaiah LOVED it.  He literally tried to crawl inside of it...that's our boy! (He's already loving Disney World!) 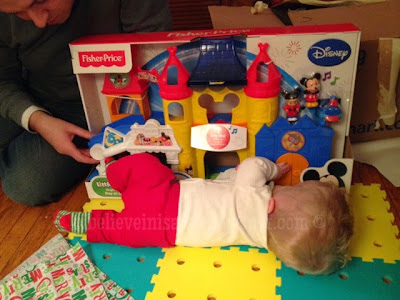 He didn't last long after that though.  He ended up passing out on the floor and then in his daddy's arms... 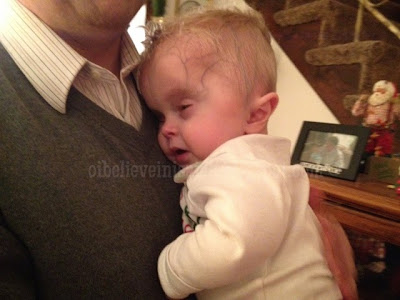 Funny thing was he was wide awake for the entire car ride home (I imagine he was wondering where are we going next?!).  Once we were home, we put him straight to bed and boy did he sleep...I swear, it's three days later now and I think he is still in recover mode.  :)

This Christmas really was amazing.  We're grateful to everyone who was a part of it.  We hope that your Christmas was just as fantastic!
Posted by OIbelieveinIsaiah at 9:43 AM