I know what you're thinking, "um, isn't Isaiah a tad young for that?"

Along with table foods, we've been working on moving Isaiah away from the bottle (of milk, people) for the last few months.  It's mostly gone well; he's gone from 4-5 bottles a day to 2-3 bottles.  Cutting naps and sleeping through the night (!!!!!!) has helped with that.  We always offer Isaiah a drink with his breakfast, lunch, dinner, and snacks.  The problem is, he just wants to play with and chew on the offered cup. 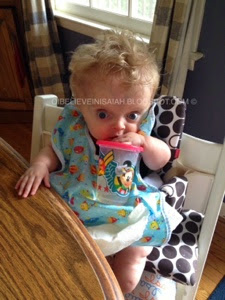 Isaiah's OT believes he'll find success with a straw.  I've tried and tried and tried.  And tried.  And tried again.  He does a beautiful job putting his lips on the straw.  I model for him...but when it comes to sucking the water in? He instead blows air out of his mouth trying to do what I do since I really exaggerate (it'd be cute if I wasn't focused on his drinking that water).  With the cups I found (thanks to pinterest), I can push the water up the straw with just a squeeze of the cup, but he's still not getting it.

I've tried being consistent with the straw cup, but he's not catching on.  After weeks and weeks of trying, I gave in to his OT's suggestion and bought some apple juice (I really didn't want to give him any drinks besides milk and water.  He has inherited my sweet tooth and I didn't want to introduce him to another way to get something sweet...but desperate times.)  I've tried just putting some of the juice in Isaiah's water...that didn't work.  I've tried giving him pure apple juice...from his straw cup and from the juice box...neither of those ideas worked.  I've tried everything multiple times.

I have racked by brain trying to think of how to help him "get it".  I've asked other moms for suggestions.  I've tried those suggestions.  Nothing.

I've started introducing sippy cups...even though his OT says he won't get it, that "a straw is easier"...I have bought 3 different sippy cups.

He just never gets it when he's eating at the table. But laying back in my lap? 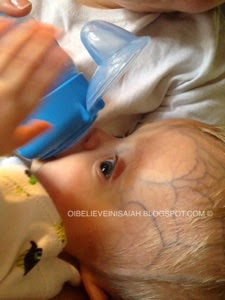 He got it!  He started sucking a sippy cup!  He was surprised by the water and started laughing and wanting more.

This is hard.  How do I get him to understand that you don't have to be laying back in a lap to drink something?

So, any suggestions? Did anyone else have a tough time with this?  What did you find success with?