I swear, one month ago, I wouldn't have thought I'd be posting this, especially so soon.  One month ago Isaiah's tongue thrust was so bad still (meaning his tongue would always hang out, especially while eating, and would push everything out of his mouth) I really swore he'd never stop eating pureed foods (I can maybe be a bit dramatic sometimes)... 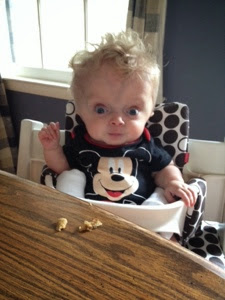 You want me to do what with this stuff?

But, all of a sudden he's got it! Our baby is officially, happily, eating/choosing table foods!!!!

Eggplant, chicken, rice, potatoes, zucchini, hot dogs, beans, pancakes, watermelon, crackers, strawberries, even peas and green beans (well...sometimes)....If I am eating it, he must have it. 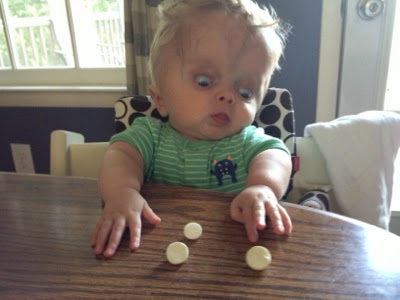 And he's feeding these things to himself! 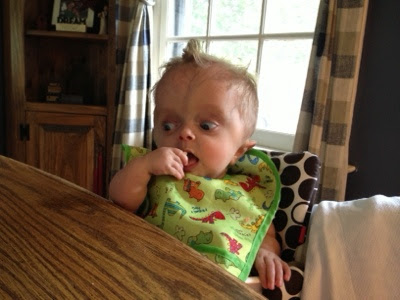 It's like a light bulb went off when Pam was over.  He was feeling good and was ready for the challenge.  He is still working on his pincher grasp when picking the food up off of the table, but he gets at least 50% of his own and that is HUGE, fast progress. 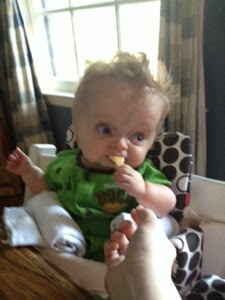 And it is SO AWESOME!

Ya know what else is awesome? His tongue thrust is GONE.  Gone just like that.  BOOM, BABY!

He's also moved on from formula since his first birthday and has been exclusively on whole milk for the last week.  He loves it.  He's been eating 8 oz bottles before bedtime...8 OUNCES! (I imagine a few other OI moms are like whaaaaaaaaaaaat? I KNOW!) CHAMP.

We're still working on one more piece and he's almost got it....straw drinking.  Thanks to pinterest, I found a blog written by an occupational therapist who recommended the Take and Toss cups to help teach straw drinking.  You can squeeze the cup so water goes into your babe's mouth.  It's really helped things.  Isaiah has everything down but the suck...however you can hear him trying now.  It's only a matter of time. 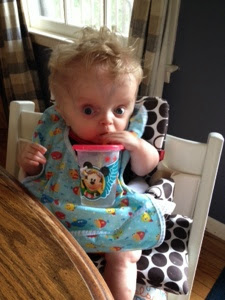 Sometimes I just can't believe it.  9 months ago this kid was eating exclusively through a tube...