So, with all the snow, and areas calling for snow emergencies, we thought it best to reschedule Isaiah's surgery...but not until after Dave shoveled our entire driveway at 5:30 in the morning. Whomp whomp.

I would love to take Isaiah outside for another snowy picture with him, but according to our cold water pipe in the kitchen, it's just too cold (Yup, it froze again.  Heating pad and space heaters to the rescue!). Instead, I gave Isaiah a nice bath, bottle, and snuggle.... 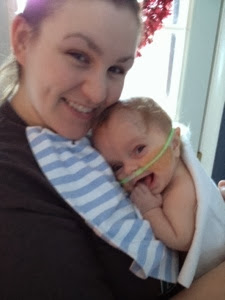 Don't mind my burp cloth bib. LOL  It's the only way I seem to avoid drool all over my clothes.

Yesterday, Isaiah got another real bath. We had found the seat that goes with this tub out in the room off the garage (where we've been storing some of the baby stuff for the winter).  It was a big hit.  The bath was much less scary to him. 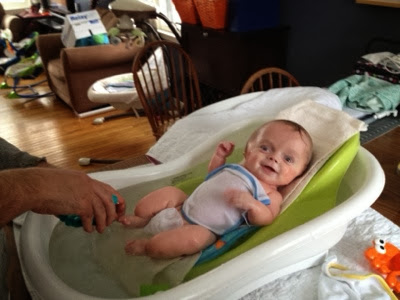 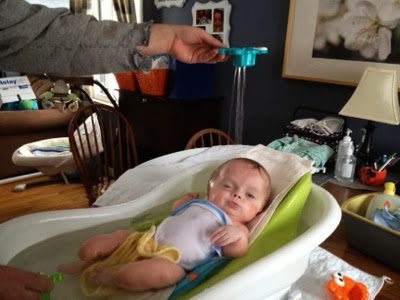 LOL! I love the look on his face.  He looks all "Daaaaaad, pffffffffffft, water everywhere". 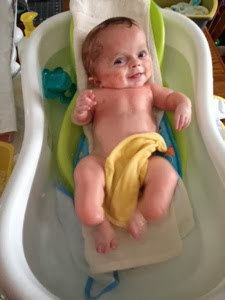 He really did enjoy this bath.  He ended up completely stretching out.  We'll try again in the future, but we have to be quicker next time.  Did you notice the cpap is off of him? It was ok for a few minutes, but since Isaiah relaxed, his oxygen dipped when he was toasty warm in his towel drying off, so we had to move quickly to get things taped back on.  We don't know how low he dipped because his sensor wasn't attached (due to the bath), but we know he was at 97% when we hooked him back on.  With all of this, we realized that maybe Isaiah isn't quite ready to be off of his machines.  Sigh. 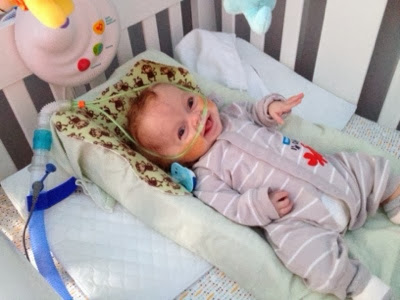 No worries, though.  Isaiah was a-ok very quickly and I'll be letting his doctors know about it when I speak with them.  I am pretty sure it was scarier to Dave and I than it was to him.  (Ignore the fact that his fly is basically down. LOL I did a quick diaper check before snapping this picture.)

In other news, Isaiah is getting really good with sitting midline and bringing his hands together. (This picture and the one above were both after his bath, so as you can see he really is ok! :) 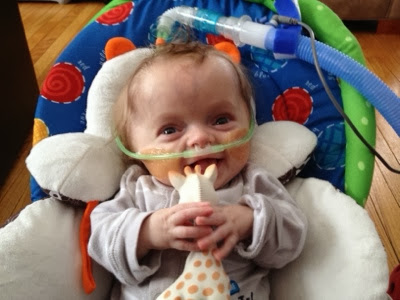 Posted by OIbelieveinIsaiah at 9:00 AM