So, we had a rough one last evening/night.  Now I am confident to say that it was just a night that can occur to any ole family with a baby but eww wee did my brain blame OI quickly.

Isaiah was wearing the outfit below. 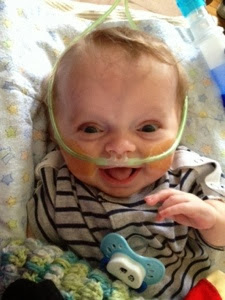 Cute, right?  After his nap we put him in his rocker as he was a bit fussy.  When I gave him his Prevacid (which he loves since it's fruit flavored), he spit some out (first sign his belly was hurting...that we missed) and it got on his clothes.  I needed to get the clothes off of him so it didn't stain (yup, my obsessive side comes out when it comes to Isaiah's cleanliness sometimes) and as I was about to unsnap his sleeve he went ballistic.

And so began hours of what I lovingly call "devil baby".  He was red/purple, screaming, crying....I immediately thought "oh no, I broke something!"  but then we noticed both of his legs were pulled up (that's a sign for him that his belly hurts).

We had friends over, and we felt terrible because Dave and I spent a majority of the night taking shifts rocking Isaiah in his room.  After attempts with gas medicine, gripe water, a bottle, tylenol.....either it began to pass or something worked (don't ask me what worked because I have no clue!) and he calmed down.  The waves came and went. His heart rate never went out of the ordinary, though.  He was moving everything.  We continued to think that it was his belly, but I of course kept up with the "what ifs".  When I went to burp him, he would freak out and devil baby would appear again so I was extremely concerned that maybe he did have a break and maybe it was something in his torso, a rib or a fracture in his spine...but his breathing wasn't any more labored or rapid.  His nurse didn't hear anything when she listened to his lungs either (sometimes you can hear things rattling when a rib is broken).

I remembered then that I had been having trouble getting him to burp in the morning.  Maybe it was really bad gas pains?

It continued through most of the night. He tried sleeping.  He'd wake up screaming out of a deep sleep; he'd startle and freak out. He hardly ate a bite when we attempted the bottle.  His nurse came up with a few interesting thoughts.  1) Using a washcloth that was soaked in warm water, placing it in a ziploc baggy, and placing that on his belly.  It gave him instant relief.  2) She remembered I mentioned how I was feeling horrible and having stomach problems myself on Tuesday.  Maybe I had a bug and gave it to Isaiah?

It's definitely possible.  It lasted about 10 hours for me and honestly, that's about how long it lasted for Isaiah.  After his bottle at 2am, I was able to burp him and he was much easier to soothe and go back to sleep.

He woke up this morning like his normal self.  He seems to have his appetite back too as he took 4.5 ounces!  After his bath at 8:30, he passed out asleep and has been sleeping for the last hour. Hopefully we made it through that and it was just a quick stomach issue.  No one likes to see their baby feeling miserable...and it's awful when you don't know what to do to help make it better.

I'm hoping he gets some serious rest this morning to make up for the lack of sleep last night...and maybe I can catch a wink or two as well. ;-)

I hope you are staying healthy! I think it's time for spring, don't you?
Posted by OIbelieveinIsaiah at 9:34 AM