Sleep Studies.  If you're a follower on the blog, you know how we feel about sleep studies. 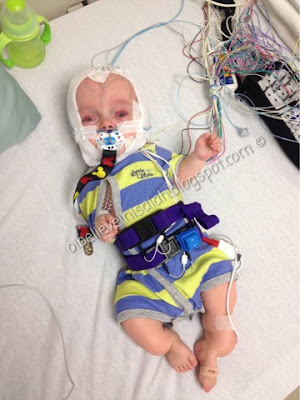 How anyone is expected to sleep with all of that attached to them, I don't understand.

But, this was Isaiah's fourth sleep study, so he's a seasoned pro.  ;-) For anyone new to the blog, Isaiah has had to do sleep studies to check his obstructive sleep apnea.  He used to live on a constant C-Pap 24/7 because he went into respiratory failure around one month of age.  His apnea was severe, with many "events" taking place throughout the night causing his oxygen to dip.  As he got older and stronger, he moved on to only needing the C-Pap at night and having much less dips in his oxygen.

When night nursing ended, I moved all of Isaiah's medical stuff into in to his nursery.  It's funny, I was trying to find pictures of it in his room but I don't seem to have any!  To be honest, I hated having it in there, his nursery was my one "baby" place...if that makes sense...it's completely silly, but I even got into the habit of storing his c-pap machine in the closet during the day so we didn't have to look at it.  It stressed me out.  Maybe because his going into respiratory failure was so awful and I just didn't see that coming?  I knew his bones would break, I knew we'd have challenges, but such severe breathing problems?   It was scary stuff.

Sleep studies bring it all to the forefront.  They are supposed to tell me how Isaiah's apnea is to let us know if he still needs the support.  To me, sleep studies are supposed to give me some good news and be the ending paragraph to the C-Pap chapter of Isaiah's life story...but gosh darn it, they never are!  The chapter is forever long.

Isaiah has had time off from the c-pap to test his body and see if he could handle sleeping without it.  He had a sleep study in April after months without it and the results were that his apnea was significantly improved from months before.  It was considered mild.  Isaiah's doctor said that if he didn't already have the c-pap in the house, he wouldn't prescribe it, that's how mild the apnea was.  At that point, Isaiah had really begun monkeying around his crib, so Dave and I made the decision to keep him off the night time C-Pap but continue to monitor his oxygen using the pulse ox....that was until this past August, where his monkey movements had him twisted up in the cord to the pulse ox, and/or chewing on it when we thought he was sleeping...so we cut that too (that was hard for me.  having the monitor helped me sleep better, knowing his oxygen was in a safe place...but he hadn't had any issues in 6+ months, he was no longer "noisy sleeping", and he was at risk to hurt himself with his shenanigans).  I emailed his doctor and he actually called to pull one of our C-Pap machines.

So this sleep study was to be the for-real-this-time end to the C-Pap.

This last sleep study was the best Isaiah has ever had in terms of results.  His oxygen stayed up in a safe place whenever he did sleep (he didn't sleep so well at this one....actually ended the study early because of how much/loud he cried dealing with it)...he still has very mild apnea, but everything (his oxygen/CO2) stayed normal when he slept.  He officially has the blessing to stay off the c-pap and monitor.  And he doesn't need another sleep study until June of next year!

Can I get a WOOT WOOT? 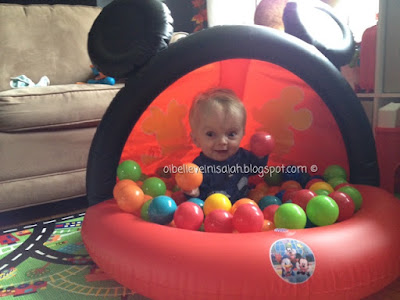 We are hoping to keep his c-pap and monitor for the winter (tucked away of course) in case Isaiah gets sick and needs the support, but yep, I'd like to call this chapter OVER, my friends.  We're not ordering any supplies at this time since we have them on hand if they are needed (but they will hopefully not be needed).

And just like that, Isaiah's room looks like it did in my dreams....free of machines and their supplies...because he's strong enough without them. 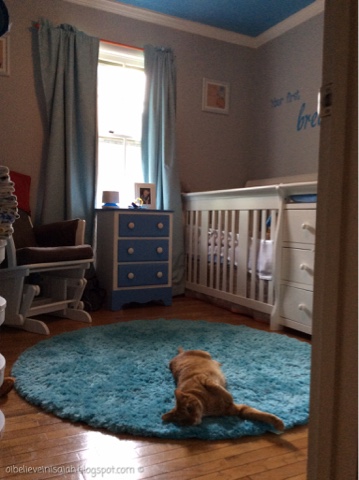 We feel blessed and grateful that this study solidified what we've known for the last few months, Isaiah is strong enough right now to not need support....he may need it again some day.  He may need his tonsils/adenoids removed at some point if the apnea worsens. But for now, the chapter ends.

I do want you to know that I appreciated what the machines did for Isaiah.  They were the perfect support to help him grow strong. They are a huge part of why/how he is here today...but this is a time I have been dreaming about for two years! It's a big cause for celebration.

Excuse me while I go kick my heels... ;-)
Posted by OIbelieveinIsaiah at 8:00 AM