It was just over a month ago that Isaiah had his hernia surgery.  He had a hernia pop up in late spring and we had it diagnosed at his next pamidronate treatment.  (That's when we go to the hospital for his bone treatment.  It won't cure his Osteogenesis Imperfecta, but it basically helps strengthen the bones and promotes growth.)

Before he could get cleared for surgery, we had to stop in to see his orthopedic surgeon to verify a fracture in his right leg since it was on the same side as the hernia. 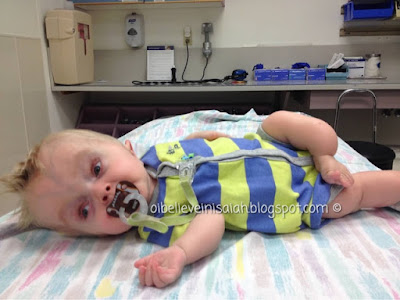 The fracture was healing but teeny tiny.

With ortho's blessing we prepared ourselves for Isaiah's third surgery.  (First surgery was to place his port and ear tubes and second was to place a shunt to alleviate his hydrocephalus.)  We stayed at the Ronald McDonald House across the street from the hospital because we had to be there bright and early the next morning.

He handled pre-op rather well.  We hung out watching tv while I signed papers and met with his doctor, nurses, and anesthesia team.  They accessed his port and gave Isaiah a mild sedative.  Amazingly, they agreed to have me help position him on the operating table.  I suited up in what they lovingly call "the bunny suit" and I helped wheel Isaiah to the operating room. 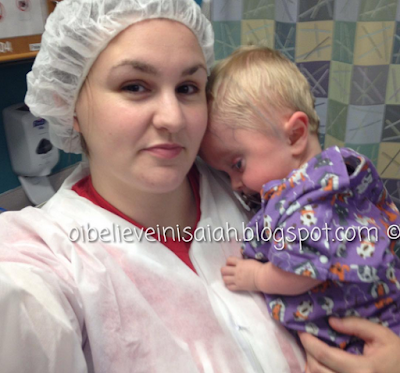 It was cold and white and full of many people scrubbed in and wearing face masks.  So many times now I've been able to face things along side Isaiah and this one really caused me to hold my breath.  Being in the room where they'd be working on him.  Intubating him.  Fixing what needed fixed.  This was such a minor surgery but minor surgeries still scare me because of Isaiah's respiratory history....and surgery.

The operating table had something like a bed of warm air for Isaiah to lay on, on top of a special gel pad....all to keep him warm and to protect his bones.  There was a fan that was blowing warm air into it constantly.  With the nurse's direction, I laid Isaiah right onto the pad and I helped position his head and shoulders to their best position for him to be intubated and to breathe the clearest.  They allowed me in there until the tears welled in my eyes....(guys, sh*t was getting real in my brain.), watching him go under. I was there while he went into a deep sleep on a better sedative, gave him a kiss, sung him his Honeybunch song, and walked out to wait for it to all be over.

His surgeon was wonderful, telling me something like "I've got this".  I still offered to scrub in, because we have that kind of goofy relationship (this is the second surgery he performed on Isaiah, the first being placing the port), and he told me to get the heck out of there...but something funnier, because he has a similar sense of humor as Dave and I.

Once surgery was over, Isaiah stayed sedated and intubated and was wheeled to medical imaging for his very first DEXA scan.  A dexa is a bone density scan; it measures the bone mineral density. After that, the plan was to take him to the PICU (The Pediatric Intensive Care Unit) for him to be watched overnight...but things didn't go as planned.... 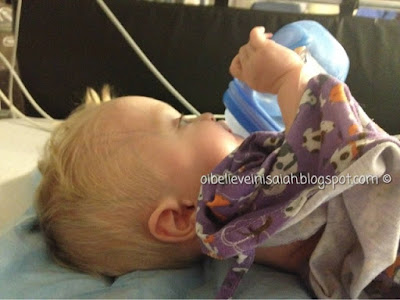 Instead, Isaiah handled everything so well during and after the surgery that they brought him to the PACU instead....which is the place you'd typically go after a minor surgery.  (I was shocked...I had been prepared for a night in the PICU.)  I was brought in to see him as he was waking and watched him drift in and out for a bit.  Once he was more awake, I asked him if he wanted water and Isaiah downed an entire ounce.  We waited a few minutes and I was able to offer him more and he guzzled another ounce down.  No vomiting.  He was waking up more and more. 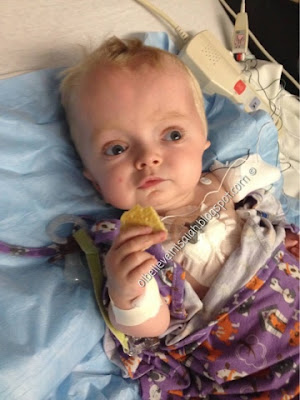 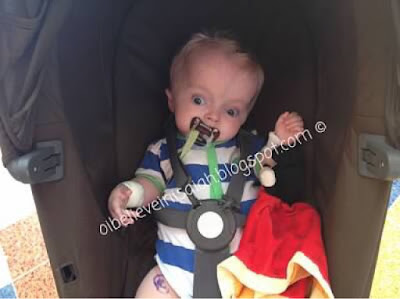 I double checked to make sure they didn't mean for us to stay at the Ronald McDonald House....nope, they meant for us to go home.  home HOME.  So we did.

Isaiah inhaled his dinner when we got home and honestly, you'd never know he had surgery just hours before.  He had an incredible night's sleep and it was just...all....surreal. 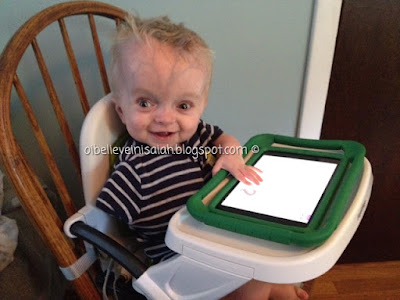 His incision has healed beautifully and this surgery really showed us how strong Isaiah has become.

I should hopefully be posting again on Friday....we have had quite a few well visits and follow ups the last week and a half, so I'll share the details of those in the next post. :)
Posted by OIbelieveinIsaiah at 7:30 AM