When we went to Isaiah's first OI clinic a few weeks ago, we met with a physical therapist (PT) at DuPont.  Isaiah has a PT that he sees weekly (actually twice a week because he also sees her for water therapy!), and that we adore; she was thrilled to hear that we were meeting with a PT with lots of OI experience. 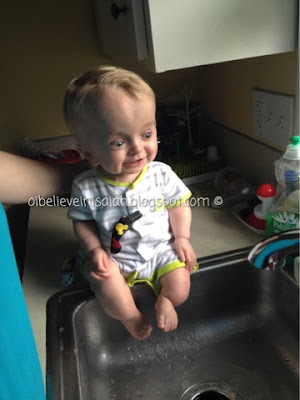 Meeting with a PT who frequently sees other children with OI gave us the opportunity to get lots of ideas for what PT should look like...and a lot of that was already implemented...rolling over, tummy time, reaching passed midline....I could on, but she also gave us the go ahead to try some things that I have been hesitant to try at home with Isaiah's regular PT. (Basically, stop being such a chicken, momma.)

One suggestion she had for Isaiah was that he needs to try "short sitting"....coming up with something for Isaiah to sit on took some creativity but once we figured it out, it was amazing!  He's rocking putting some weight on his legs 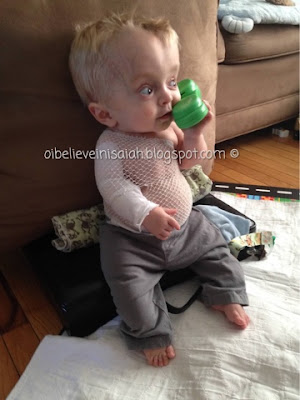 "Hello? Dr K? It's time to take this splint off now."
(This photo is from a few weeks ago, when he had a broken arm)

We're even working on getting him short sitting in his wheelchair like he should be. 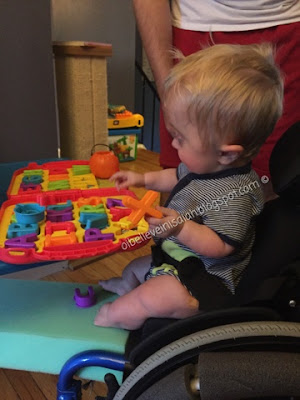 This picture was shot in the middle of changing things up. ;-)

Originally he was short sitting in his chair, but then he couldn't reach the wheels because he was sitting too far forward.  I put off finding a solution until we talked rods with his orthopedic surgeon (rods will likely lengthen his legs, so I didn't want to change his cushion if it was only for a short period of time, especially since he's been successful propelling his chair sitting the way he's been).  I chatted with some fellow OI moms (once I knew surgery is being put off) and some suggested cutting his cushion....I couldn't do it though; that little sucker costs hundreds of dollars!  Instead, I found some thick foam at a local craft store and cut that to size.  Bonus is that it was a remnant; I got it for $5. I've got enough for a foot rest and an extra seat cushion!


Beyond short sitting, we're also trying to give Isaiah ample opportunity to scoot on his behind.  Now that he is rocking independent sitting, we're hopeful he'll start trying to get moving.  We want to give him a good, stable place to work on moving, and one suggestion we love is to give him baths in a laundry basket. 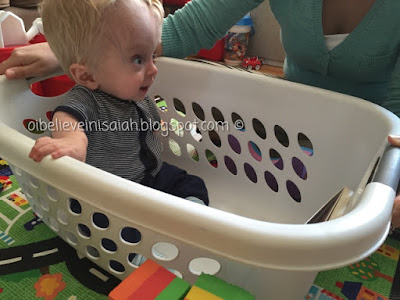 Yup, a laundry basket!  The holes give and sides give him lots of areas to grab onto to support himself and pull. He was still getting baths in a baby tub, we're going to give him a few days outside the tub in the basket (to get used to being in it) and then we'll be moving on to baths in this basket, hoping that the water will give him the ability to move (hello at home water therapy).  I'm nervous that I'm going to have one slippery little boy, but he really can and should be sitting up in the tub to strengthen his muscles.  Isaiah hasn't been challenged at bath time, it's time to change that. :)

Sorry for the lack of Wednesday posting, we had two appointments that day that took over my brain. ;-) More on that next week. :)

Posted by OIbelieveinIsaiah at 10:39 AM