Two weeks ago, we had what felt like a parade of appointments....all well visits and follow ups over the course of a week. 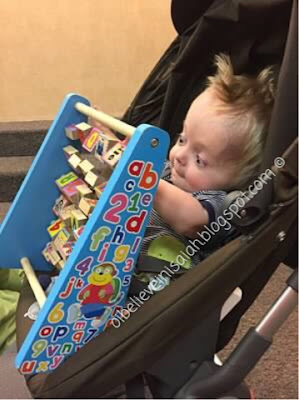 WHAT?!?!  Mr Smarty Pants!  (#Mombragalert) Makes my teacher's heart sing....and makes me realize we could have an early reader on our hands?  Pretty awesome because honestly, sometimes I worried that the hydrocephalus could have affected him....since he took so long to really start talking...but nope, he's reminding me that he goes at his own pace. ;-)

Isaiah's teeth look great.  He does have Dentinogenesis Imperfecta, which we know and is a result of his having OI.  Basically, he has brittle teeth.  It's the reason his teeth aren't bright white.  Despite it, the shape of his teeth look good and they haven't started grinding down just yet.  We know at some point he'll need caps put on his baby teeth to protect them, but it's not time for that just yet as that should wait until they are all grown in...unless an emergency happens to a tooth.

We did find out that all of his 2 year molars are coming in at once.  Which explained some behaviors we were seeing that week.

That same day (because let's get this torture over with), we had Isaiah's 2 year well visit....only 2 months late.  Whoops.  This was the first time that Isaiah wasn't a hysterical mess for his primary doctor.  Usually when she sees him, he's a crying mess, but this time he was happy reading his books, cracking up laughing, rolling in his chair...I think she didn't want to touch him because she got to see his happy side and it is pretty awesome. ;-)

Along with a conversation of how he's doing, an autism check list (which he shows no signs of), and a flu shot (sorry dude, it's for your own good), we were done with appointments for one day...

Two days later, we visited Isaiah's ENT from DuPont at their office local to us. (Thank goodness for that.)

There, he learned how to run away from doctor's offices.... 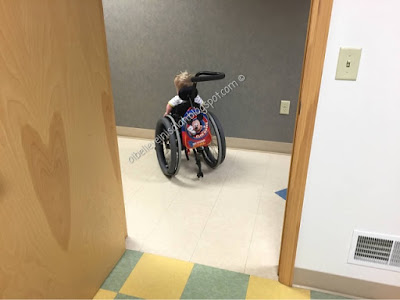 Yep, that's Isaiah thinking he's rolling out of the middle of his ENT appointment.  Little did he know we were just in the vitals room and needed to switch to the check up room...

His ear tubes look great.  The doctor was very happy with them.

Our last appointment was three days later, at DuPont itself, for a follow up from Isaiah's broken arm.  He broke his arm in September (back when I was on a blogging break).  We were at the library for Toddler Time and he got upset that a song ended (something we're working on) and I couldn't calm him down so I rolled him out of the class....when I went to pick him up (the same way I've picked him up each time before) I heard and felt the break happen.  :(  I then held my breath as I held Isaiah in my arms and pushed his chair as fast as I could out of there. ...I got him wrapped and he was ok for a few days....when he then was feeling better, he rolled on it, rebreaking it. :(  We continued what we were doing, except we worked on avoiding his rolling onto his side....and then had it checked at OI Clinic where they confirmed the break. 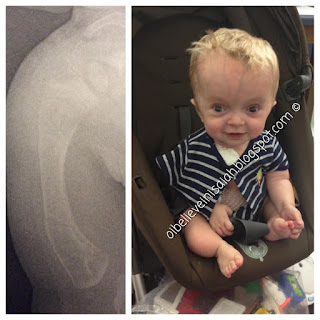 You can see the fracture a little less than half way down the bone.
This was the X-ray taken at OI Clinic mid Sept.

We continued to keep it wrapped two more weeks...it was supposed to stay wrapped for four weeks but Isaiah got insanely aggressive on wanting the splint off and after fighting him for two days, I was so afraid he'd fracture himself again with how hard he was trying to remove the splint, that I just took it off. (Isaiah 1, Mom 0)  We were nervous but Isaiah was moving/using his arm completely normal.  I checked in with his doctors to let them know I removed the splint and why, and we just proceeded carefully.  A week later I put him back into his wheelchair for his appointments and a visit to Longwood Gardens.  (I waited to avoid his using that arm to push his chair, in fear of rebreaking it again.)

A week after that Longwood visit and we were at DuPont for the follow up I mentioned.  Isaiah was x-rayed again and his doctors informed us that it looked beautiful and was all healed. 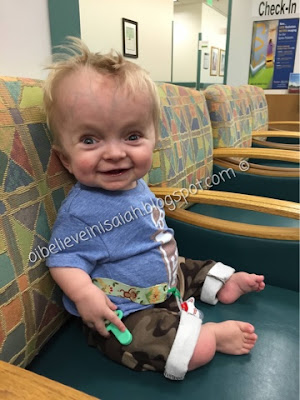 We've basically been back to our normal....except for a little virus that made it's way through the house. Thankfully Isaiah was over the worst of that virus this past weekend so we were able to go to Sesame Place and go on our first date since Isaiah was in the nicu while he experienced his first respite care.  More info on that in the next post! :)
Posted by OIbelieveinIsaiah at 9:41 AM