We're at AI DuPont Hospital for Children pretty frequently, but as Isaiah gets older, the amount of time we're there continues to get less and less.  Pam treatments were supposed to be every 8 weeks until he turned two, now we're stretching them out to every 9-10 weeks and by the time Isaiah is three, I believe it'll be every 12 weeks (woo hoo! No offense Dupont family, we love you!)

Something else has changed since Isaiah is two, he's now ready to go to OI Clinic.  OI Clinic involves seeing his geneticist, orthopedic surgeon, and a physical therapist with OI experience, all at once! 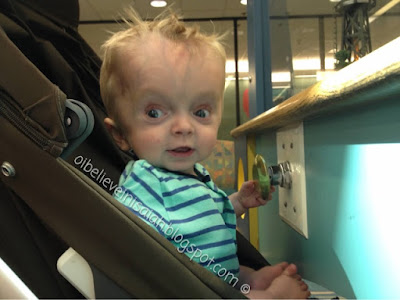 Since we live a few hours away from the hospital, the doctors and schedulers did me a huge favor and squeezed us into the schedule when we were there for his latest Pam treatment.  It made for an exhausting day (especially because we also did a sleep study the night before, yup.), but was worth it.

We were grateful to have clinic the same day as pam for more reasons than just convenience.  The PT we'd be meeting with had a chance to stop in while Isaiah was relaxed and getting treatment.  When she arrived, he was rolling around playing on his bed in Day Medicine so she was able to see him comfortable...(he wouldn't be comfy later at the clinic appointment, because it all looks like a doctor's office, and spoiler alert, he actually fell asleep while we were in clinic, which really would have wrecked her chances of seeing him moving).  Her meeting us in Day Medicine gave us the chance to really talk about Isaiah from a PT perspective, what we're doing with him and what she'd like to see him do.

After Pam was done that day, we headed right to the sign in area for clinic.  From there, we made our way to X-Ray, where Isaiah had his spine and legs x-rayed.  They also included his right arm to check for the fracture we suspected (this was mid-September). 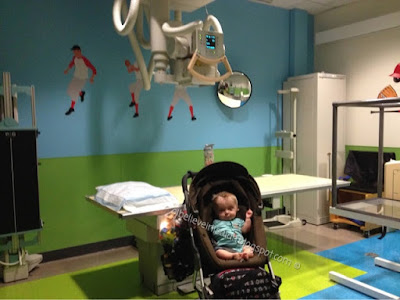 Once we were finished with X-Ray, we were brought to a room to wait for everyone to arrive.  They had been meeting with other families and then checking out Isaiah's X-rays together.  We were expecting to talk about rods with the doctors, so we knew that was a big conversation they were having over the xrays.

What are rods?
Rods are something many with OI get placed in their limbs if they are fracturing a lot (they basically act as internal splints) and to help straighten the bowing in the limbs if that's there.  There are different types of rods.  Isaiah's orthopedic surgeon works with what we hope he can get- FD Rods aka Fassier Duval Telescopong Rods.  Telescoping means they grow with the person, which means less replacing, less surgeries, as compared to other types of rods.  The rods are surgically placed inside the bones....and honestly, I don't want to go too much more beyond that right now, because it scares me.

Rods mean a lot to us.  I believe Isaiah feels unstable.  I believe he feels the fragility of his bones and that's why he isn't more active.  I am hopeful that rods inside of his bones will give him the courage to move.  But....according to Isaiah's ortho, it's not quite time yet.  He'd like to see more to Isaiah's bones.  He doesn't feel his bones are right for FD rods yet, but believes they will with a bit more time.  In the meantime, we're listening to the PT we met with who offered us a laundry list of things to work on with Isaiah and his therapy team at home.  She wants him bearing weight on his limbs and although it makes us extremely nervous, we're working on it.  More details on that in the future. ;-)

Isaiah's geneticist is thrilled with the progress of Isaiah's skeleton.  Isaiah's bones look brighter/whiter than they've ever looked before.  He has no scoliosis and that makes my heart sing.  Remember how he had a moderate kyphosis and we were put on limitations on what to do with Isaiah?  Well guess what?  That's practically gone!  He has one vertebrae affected by the kyphosis, as compared to the four that were affected last year, so that's fantastic news.  That means the pamidronate is doing it's job and Isaiah's bones are getting stronger.  OI type III is deforming; there's no way around that.  It will be a constant battle to keep his spine as straight as possible.  His spine is very important, because if it curves too much, it can very much affect everything in his torso.  His lungs are already restricted by the space available, curving of the spine would restrict that space more.

Speaking of his lungs....we've also recently found out the results of Isaiah's latest torture sleep study!  Details on that later.

Gosh, if you actually read all of this, you deserve a cookie.  :-P
Posted by OIbelieveinIsaiah at 9:00 AM