Earlier this week, I emailed Isaiah's pulmonary doctor to let him know of some changes to our daily routine that have occurred.

You see, at night, Isaiah is supposed to sleep with a C-PAP to help with his mild obstructive sleep apnea and he's also supposed to sleep with a pulse ox so we can monitor his oxygen saturations.  His C-PAP wearing was not consistent, but we always put the pulse ox on him.  For anyone that doesn't know what a pulse ox is, it's a monitor, a bit bigger than an alarm clock, that shows Isaiah's heart rate and oxygen levels.  It connects to Isaiah with a sticker on a very long cord.  Isaiah's oxygen levels have been healthy for a long time.  (At his last sleep study, his oxygen stayed in the 90s the entire time, never dipping below 91, and that was only once.)

Honestly, I was basically addicted to it.  It used to help me sleep, knowing that if something happened to Isaiah, it'd beep to wake us and alert us.  I'd say I wanted it until he was 30....and I was only sort of kidding.  But then it started beeping constantly all night...and when we went to check on him, he was fine, it was beeping because he's moved and the sticker fell off. 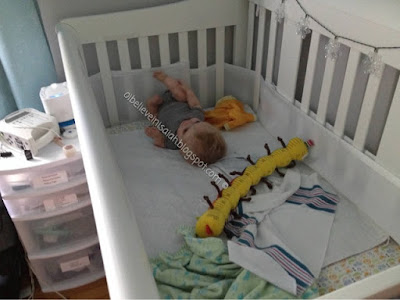 The pulse ox monitor is on the plastic drawers next to Isaiah's crib.

And he sure did move.  He'd have spun a 180 in his crib.  He'd be at the opposite end of the crib than we put him in (kid used to stay put!).  He'd be chewing on that cord for the pulse ox.  It'd be wrapped around his legs or entire body from all of his movement.

A pulse ox isn't meant to be on someone who is moving.  It can't read accurately.  None of us were sleeping because the beeping was waking all of us up.  So, after a few new tricks we'd learned from others to keep the pulse ox on safely failed, we made the executive decision to just stop using it.  It became a danger.  His chewing on it and me afraid he'd get electrocuted (likely an exaggerated worry) and it's getting wrapped around him had us very worried it'd get caught and cause a fracture overnight when he would move in his sleep. 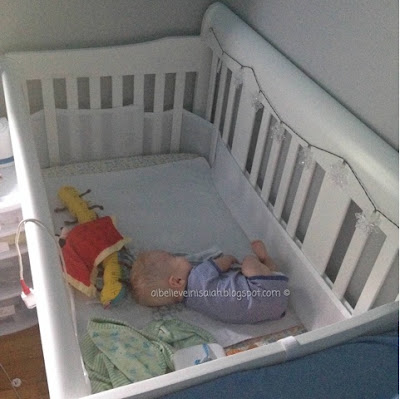 You can see the pulse ox cord hanging from the side of the crib in this picture.

We've had him completely free of his machinery now for a few weeks...I avoided emailing his doctor because this was not part of the plan....but I knew I had to, so I emailed him.  He replied back rather quickly agreeing that we have to weigh the potential risks with the benefits of the monitor.

And then we got a phone call from the oxygen company saying they received an order to pick up one of Isaiah's c-pap machines from the house.  We have two- one for travel and one that stays home...

I kicked my heels.  Yes, I think it is time to send one back!  Isaiah has another sleep study coming up in a few weeks.  Hopefully it will solidify how we feel; this chapter of Isaiah's life is over.  For now, his apnea is resolved.  We know that he will likely need the cpap again in the future....I know of a number of adults with severe OI that sleep with a cpap. 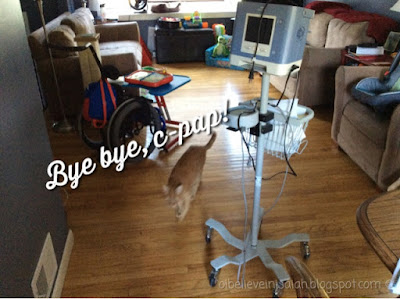 We will still have one in the house if Isaiah were to need it (if he were to get sick and it affect his breathing).  We still have the pulse ox too...they are just put away for now...and hopefully will soon be sent back to the oxygen company too. :)
Posted by OIbelieveinIsaiah at 8:40 AM