Sigh, my nerves are through the roof.  Less than a week until Isaiah's surgery.  I've had a hard time posting recently; part of me wants to completely let go on here about it and part of me just can't because it's depressing and I personally don't go on the internet to be depressed.  I go on for funny cat pictures and adorable pictures like this... 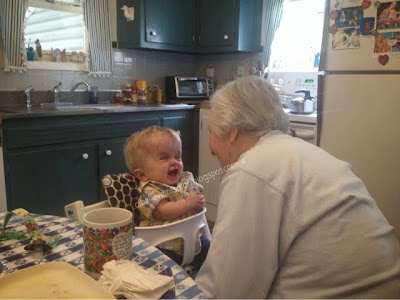 Before Easter, I last posted at 2am during Isaiah's most recent sleep study.  This was his third one.  He goes through them to check on his breathing while he sleeps. 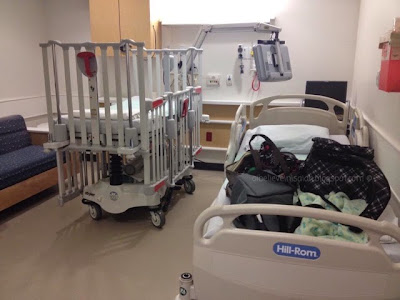 I'm actually pretty lucky Isaiah is so young when he goes for his sleep studies because I get the bed.
Usually the parents get to sleep on that luxurious couch over on the left.

He was diagnosed with Obstructive Sleep Apnea after his first study.  Basically, he'd stop breathing while he slept (I feel like that sounds scarier than it is maybe....Obstructive Sleep Apnea is very common), it'd wake him, and he wasn't get a restful sleep- the c-pap made breathing easier for him so he had to sleep with it.  It was severe back then but improved as per the results of his second one.  Between his second and most recent study, we've seen great improvement in Isaiah.  I learned that his apnea seemed positional, meaning that whenever he spent the majority of the night on his back, he had more apnea episodes so we would really push him to sleep on his side.  He always sleeps with something we call a pulse ox (it's a sticker we attach to his foot that connects to a machine that measures his oxygen saturations and heart rate) so we can monitor things.  If he's having an apnea episode, his oxygen drops and the machine beeps.  It used to beep a lot.  Nowadays it only beeps when he's rolling over and the sticker is falling off. 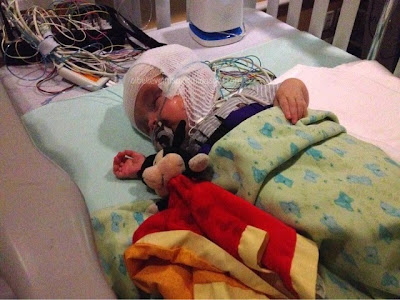 Here's a picture of Isaiah during his sleep study.  They attach what seems like a million wires to his head, face, and neck.  Three also attach to his chest (they call them "leads").  He gets a pulse ox on his foot and a thin cannula under his nose that measures his breaths- I believe it measures the CO2 he is breathing out.

Because I didn't sleep a wink during the previous sleep study that I did with him, this time I attached yet another wire to him, his at home pulse ox (I am crazy; I needed to see his oxygen saturations and they don't have a monitor in the room for the parents).  I should have used a new sticker- it wasn't attached right and beeped a million times.  It had me up all night worried because he never beeps; I knew it was wrong (I could tell by his breathing) but I didn't want to reposition it because that would wake him and I didn't want to wreck the study.  I ended up turning it off when I started that blog post.

I had asked the woman who set everything up (she's a respiratory therapist) to please end the study as soon as she had enough data, even if she'd have to wake us, and thankfully she did!  I seriously just wanted to get home.  We were able to end a whole hour early compared to Isaiah's previous studies (which made sense since he went to sleep an hour earlier this time). 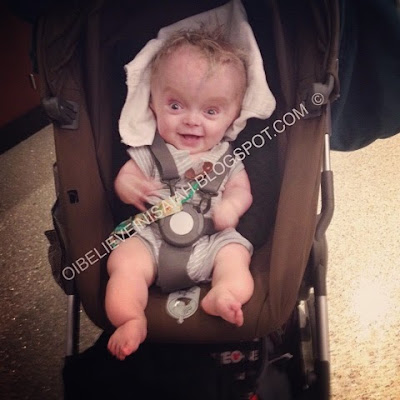 At first he was pretty peeved to be woken up, until he realized it meant we were outta there.  Seriously, his butt hit the stroller and he was like "go, momma".

The techs aren't supposed to tell us anything but it never hurts to ask... ;-)  So I did, especially since I was having trouble with our machine.  She said it was definitely my sticker having issues because her's read that Isaiah's oxygen saturation stayed at 98% most of the night (safe for Isaiah is anything above 95%).  She saw a dip once to 91% but it was due to his rolling over- the sticker lifted off his foot a bit (I then fixed it as I had been checking on him) so it was marked as inaccurate.

Sleep apnea is common, especially with those with OI.  I imagine we may be looking at it again in the future but I am praying that Isaiah's doctor's interpretation is as positive as the RTs...we should hear that during our next Pam treatment (unless for some reason he stops by next week after surgery).  If they are, we can hopefully officially say goodbye to the c-pap and everything with it and finally officially end that chapter of Isaiah's life story.
Posted by OIbelieveinIsaiah at 11:14 AM