Yesterday was quite a busy day for us.  We started out with Speech Therapy at our new weekly day/time, 8:30 in the morning...(he wakes up early I said.  We'll have been up for hours I said....and then this was the one day Isaiah slept in until 8. Cool.)

After speech, we had our usual morning, followed by a little swing time on the back patio. 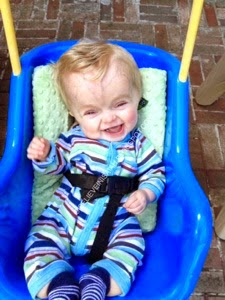 We enjoyed some lunch together and instead of putting Isaiah down for nap, he watched a little Disney Junior until it was time to head out to DuPont for our follow-up from surgery.

We saw a lot of familiar faces in the halls...to the point that another family asked if we were celebrities. Ha.  DuPont is kind of amazing....the staff there gets to know their patients and families who frequent there, and yep, a lot of them know us by name.

Dr C was pretty booked up yesterday, so to pass the time in the waiting area, I hooked Isaiah's Ipad to his stroller and he watched some Mickey.  (You see, my hope was that he'd pass out on the way to DuPont in the car...and he did...for 20 mins....so he got lots of screen time so that he didn't lose his exhausted mind.) 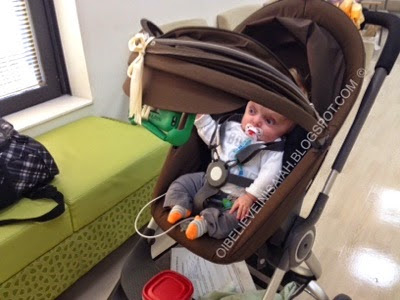 A nurse measured Isaiah's head- still the same exact measurement as before surgery.  (YAY!)  Once we saw Dr C, he felt his head, looked over his incision on Isaiah's head, and asked some brief questions.  He believes the shunt is working.  We now have a Fast MRI scheduled to see how well the shunt is working when we are back for Pamidronate (ya know, that treatment Isaiah gets every 8 weeks for his bones) and then a follow up with Dr C again to go over that.

We also heard from Isaiah's pulmonologist about Isaiah's sleep study.  Isaiah still have obstructive sleep apnea, but it's considered mild now.  In fact, Dr. H compared his sleep study from this year to last year, and the amount of issues he had have been cut in half, so he's made amazing progress; he's clearer gotten stronger.  His oxygen stayed at a healthy level the entire night.  If he didn't have a c-pap at home, Dr H wouldn't even recommend one at this level...but since we have one....we're recommended to put him back on it.  whomp whomp.  It's a bummer...but we're doing what we have to.  But Isaiah has been fighting bedtime like it's his job, so adding in the c-pap cannula or mask again.....bedtime sure is FUN! ;-) And, joy of joys, we get to go for yet another sleep study in September!  (Can I just say *#@* &#!@* &^(# &~&*!) 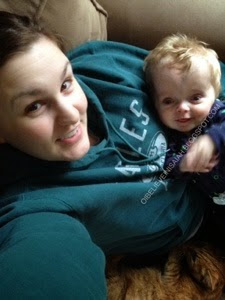 Still improvements.  Still smiling.  Let's just forget about that %$*@$@% sleep study until it's here. ;-)
Posted by OIbelieveinIsaiah at 7:30 AM