Happy Monday! Sorry I've been quiet on the blog, last week I just needed some time with Isaiah and Dave...and my bed.  Surgery, and the worry that comes with it, is mentally exhausting on a momma!

Can you believe it was a week ago today that Isaiah had his shunt surgery? 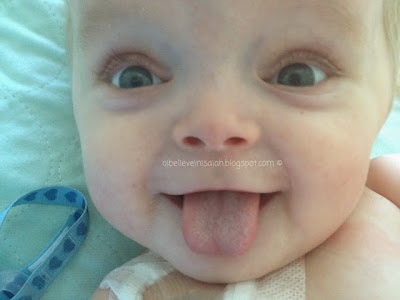 If you don't follow on Facebook, you may not know but we did break out of the PICU of DuPont on Tuesday afternoon.  We were moved to Isaiah's own room in one of the general wings of the hospital.  We had a long night there as Isaiah's apnea decided to make an appearance...he was tired so he was sleeping hard, and because of his surgery, he was staying on his back (and I've learned his apnea is positional, meaning that he breathes better on his sides).  The nurses were talking oxygen and I wanted nothing to do with that until I first tried what I knew worked (rolling him onto his side).  The process didn't make Isaiah happy, but once he was on his side he was breathing clear and there were no more beeps for the rest of the night. I kind of have this fear that if he has to go back on oxygen that he won't be able to come off of it.  It's silly, and obviously if he truly needed it I would never stand in the way of the professionals, but it felt so good that I do know my baby...to see his oxygen stay at 98% the rest of the night. 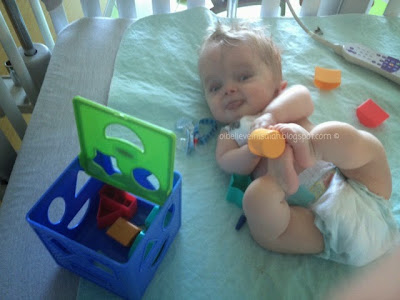 This picture was taking after we were told we could discharge from the hospital and they let me take all the cords (the leads and pulse ox) off of him.  He was a free man!

Wednesday morning, I was nervous that we'd be told we had to stay longer because of Isaiah's apnea episodes, but nope, we were talking discharge as soon as Isaiah was up for the day.  One of Dr. C's PAs came in to check Isaiah out and he was hanging out in the swing that they provided us in Isaiah's room.  I had asked for a bouncy chair or something to put him in to get him out of bed and the nurses happily helped us out. 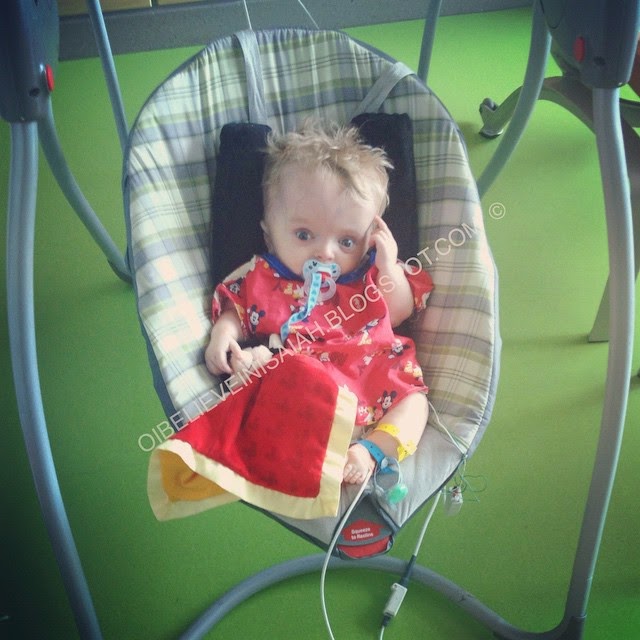 He was suffering from a bit of a headache when she came in so we talked pain management and discharge!  I couldn't believe it; it was only 9am!  Once Isaiah had his medicine, the ball got rolling for discharge.

The thing about discharge is that it's never a simple process.  Everybody has to sign off on the idea of Isaiah leaving, plus since his port was still accessed, they had to deaccess him.  I compare it to taking an IV out except it's just not as traumatic...the worst part is getting all the tape off of his chest and then just pulling the needle.  He doesn't even usually need a bandaid, just a quick cuddle from mom and putting put in his car seat are his clues that we're busting out and he gets very happy.

Sometimes the discharge process can take hours...especially if the doctors on the floor are doing rounds, but Dr C's PA expedited the whole process and we were on the way out the door by 11am!

Isaiah slept the entire car ride home (an hour and a half).  I brought him in the door, put him in his crib because he was still exhausted, he cried for 10 minutes, and then passed out for another 3 hours.  I unloaded the car and also passed out.  Hospital stays are exhausting.

When we got home, I felt like I had just run a marathon...in the shape I am in, which is not good ;-) ...I couldn't believe we were home.  This experience was so easy!  Everything went as it should!  What a blessing!

Isaiah ended up partying during the night Wednesday night (thanks to his 5 hours of sleep during the day), but we were back to our normal schedule come Thursday morning.

I gave Isaiah a bath that he was in desperate need for, and after that Carl wouldn't leave him alone.  He gave Isaiah's incision a good sniff (brains!), and laid next to him for quite some time and allowed Isaiah to pet him.  Isaiah has a tendency to pull Carl's hair, and Carl is always so tolerant, but this time, he was purring while Isaiah's pet and pulled...He missed him! He really did. 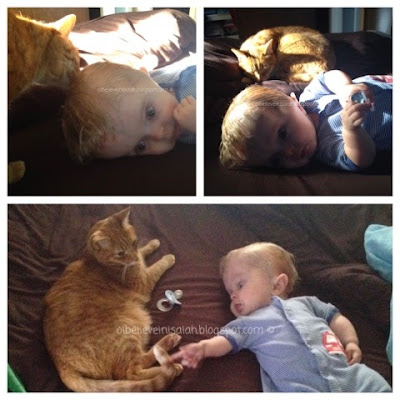 Our lives quickly went back to normal, just with some medicine thrown in the mix to make sure he wasn't in pain.  Isaiah was playing, back in his Scooot, and eating his face off. 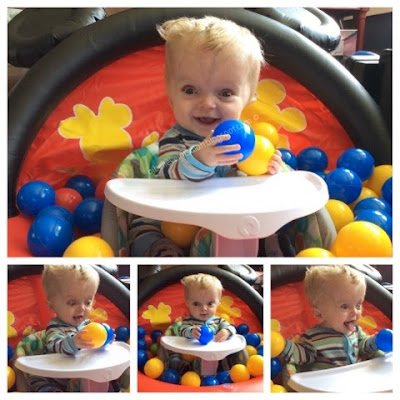 We've been looking for improvements in Isaiah since the surgery.  We know the shunt is working to get the spinal fluid out of his head because the top of Isaiah's head now has a giant dip in it where his soft spot is (the soft spot on a severe OIer typically takes much longer to close than someone without OI)- good thing he has all that hair!).

His eyes have always done something called "sunsetting" or "sun downing", that's when you can see the tops of a person's pupils.  The thing about it is that it's an OI thing and it's a hydrocephalus thing.  The doctors were hoping that would stop for Isaiah after the shunt was placed and the pressure was off of his head but alas, still sunsetting, as you can see below (try not to be distracted by the adorable thinking face he's making)... 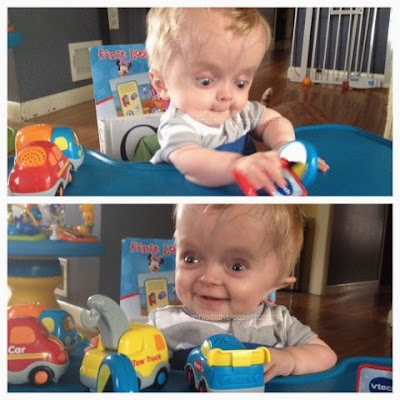 But he has been playing with more purpose.  We're not sure if it's his age, but he has been making those cars drive and throwing them much less than he used to.  We don't know if it's a developmental thing of a less-pressure-in-the-head thing, but man, we'll take it.

This weekend was amazing.  We spent almost every daylight hour outside (in the shade of course ;-) He gets his skin tone from his momma after all.) grilling, getting the remnants of fall/winter outta there, adding a third raised garden bed, started a more permanent set up for Isaiah's portable hot tub (for water therapy, once his incisions have healed), and started cleaning out/organizing the garage (um, it's exploded and if I go in this week and you don't hear from me, send in a search party)...all while Isaiah played happily nearby or just laid in his play pen (our kid has a thing about grass still) listening to he birds and airplanes...both of which he can now name! Although airplane and eggplant sound remarkably similar... 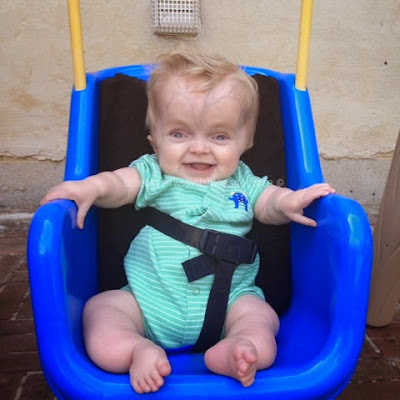 It's amazing to see how resilient he is. 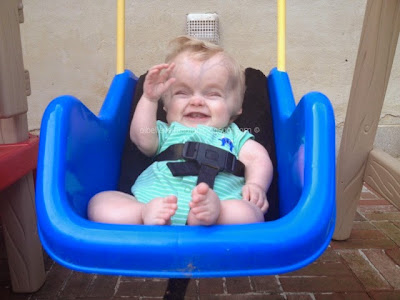 What surgery?
Posted by OIbelieveinIsaiah at 8:08 AM