If you're not following on Facebook, you may think isaiah is going through the longest surgery of all time. :-P Isaiah's surgery lasted about an hour and a half. Dr C met us in the waiting area and told us that it all went smoothly and that we could see him shortly in the PICU. The wait to see him was maybe 15 minutes? But it felt like 15 hours. The patient liaison brought us into the picu to wait in a waiting area- we passed by isaiah in his room with probably at least 10 people with him. It took all I had not to veer into that room.

We didn't know what to expect when we were let in, but thankfully Isaiah needed no breathing support and was already looking like himself, just seriously grumpy and confused. He did a lot of grumping throughout the day,a little playing, and some on and off sleeping.

He did a lots of moaning like he does when he's hungry but he had to steer clear of eating for a while. I held him on his mattress on my lap for about two hours which quieted him. Although it calmed him, it also may have helped spike a very high fever....104 at one point!  I kept commenting that he seemed hot, but we honestly thought it was related to the environment- the room was hot and he was all covered up.  Once his temp was read, we quickly got him back in bed and striped of all extra covers and padding.  Being off of me helped too and his temperature quickly dropped back to normal. (So if you notice that he is blanket-free in most of our pictures, now you know the reason. I promise I'm not neglecting him and leaving him to lay there cold :-P )

It took some time before they would let him have any food or water but 3.5 hours post op, they allowed some water. We first offered it by dipping his pacifier in a cup of ice water. He went crazy for that paci!  He just kept repeating "go!" for more water. Soon we were able to give him an ounce in his sippy cup and he guzzled it down. We waited a bit and gave another ounce. Waited a bit, another ounce.  Then he was cleared for food. 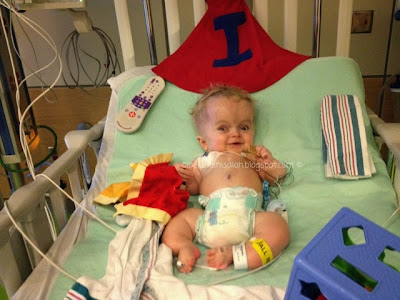 He wasn't really in the mood for much, but throughout the rest of the day, he nibbled on a few crackers, had some peanut butter, a couple spoonfuls of pureed fruit, and half a nutrigrain bar.  We had tried giving him some favorites- mashed potatoes, corn, and chicken but he didn't eat more than a bite or two of each.

So far he's refused milk and any more water (besides some sips here or there) so he's staying on IV fluids for now for the nourishment.

Tonight Dave is on duty.  I am getting a night's sleep at the McDonald house because he has to head back home to head back to work so he's giving me the night off to rest up.

Honestly, in terms of pain, today was the easy day. Tomorrow and Wednesday will be the real challenges as the anesthesia will have completely worn off.

Hopefully our Super Isaiah will handle it as well as he handled the surgery. 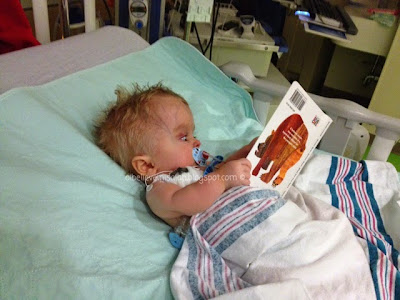 Thank you so much for your love and prayers everyone. To know so many are praying for our baby.....it's incredible. We know he got through today thanks to his strength and also because of you.

You believe in Isaiah and we love you for it.

Posted by OIbelieveinIsaiah at 10:25 PM