Lately, Isaiah's sleep schedule has been OFF.  Before surgery, we'd put him to bed at 7pm and he'd be passed out by 7:10...it was beautiful.  We'd give him a bath, a bottle, read a story, brush his teeth, and lay him in his crib while he'd roll over onto his side snuggling in to the mattress and his mickey doll while we put the pulse ox and blankets on...

Seriously.  It was magical.

Nowadays he is up until 9pm rolling around, talking, laughing, gagging himself until he pukes (which requires sheet/clothes changes), and waking up for the day at ungodly hours.

Yesterday morning Isaiah was up for the day at 4:30am.  Dave and I woke to the sound of his giggling, babbling, and yelling.

It's beautiful.  It really truly is.  We're so blessed and happy and would love to frolic around and tell you more about that.

He lasted in his crib until 5:15 and then Carl started meow meow meow meow (which in cat language means, time to feed me, get up, feed me.  Feed me before you tend to the kid in the crib, or I'll really start bellowing.) 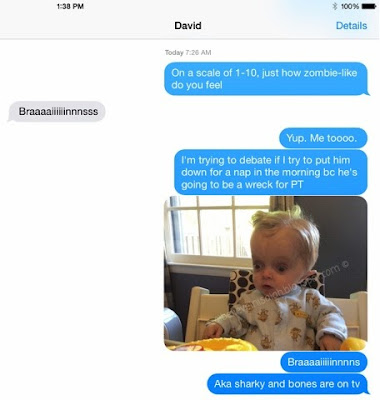 On non-therapy/appointment days (which are dwindling), I don't care.

Ok, I'm lying, I totally care and grumble on those days too.  But it really stinks when he wakes crazy early on therapy days because then he's Mr Grumble Pants and uncooperative.  I tried to get him to lay down at 9am, but he wasn't having it...so we relaxed on the deck, watched too much tv, and tried to stay awake without overworking him.

(On a serious note, I have a history of being a klutz.  Add in exhaustion and my baby with OI and that could spell disaster....so I really try not to be overly-exhausted.)

PT started out rough but he rallied and even got onto his left side for the first time since surgery! 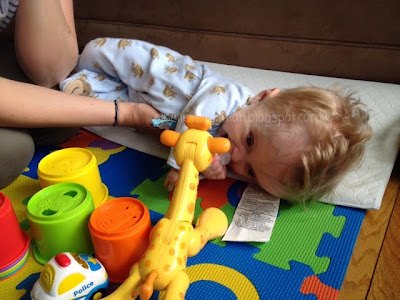 And then just like that, he was done.  He rolled over and passed out asleep.  Halfway through PT. 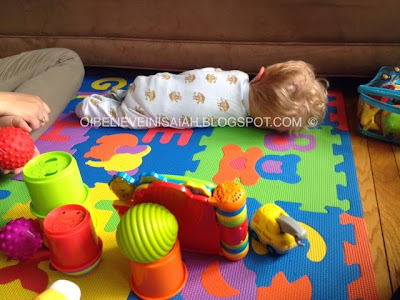 Maybe this will teach him that 4:30 is for the birds. 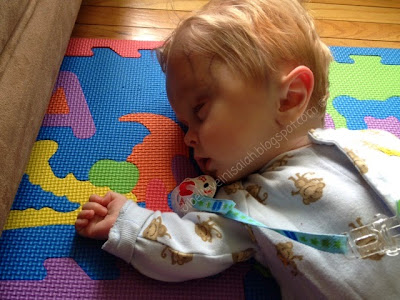