Right before Isaiah's shunt surgery, Isaiah got to test out the TiLite Twist, which is one of the pediatric wheelchairs that has been recommended to us by other parents of kids with OI.  Back in March, we tried out a different chair to see how Isaiah could handle a manual chair, and he took to it quickly...thus putting a fire under us to get him a chair that worked well.

Like the other wheelchair, the TiLite that we tried at home was too big for Isaiah, but it didn't matter....as soon as his cheeks hit the seat, his hands hit the wheels and he was rolling.


I did a bit of research focused on this brand, and with the help of my new best friend Larry and Isaiah's favorite PT Kristie, we filled out an order form in Mid-May. Last week, when we were at DuPont getting Isaiah's latest round of Pam, Dr B stopped in to tell me that he signed off on the chair but that our primary insurance company had questions about it.

He suspected they were denying our request.

They needed a "peer to peer" review...which means they wanted their "doctor" (I quote that because all I know is that their "doctor" went to medical school, I'm not sure of beyond that) to speak with Dr B.  He tried.  He called multiple times and left voicemails but didn't hear back.

I texted Kristie, who wrote the letter of medical necessity for the chair, sharing my concern about a possible denial.  She contacted Larry's office who contacted our insurance to check in.

I was very worried it was just being denied.  I was kind of having a cow about it. ...my writing about the cow brought on a 10 minute conversation about that saying "Don't have a cow"...Who said it first, Michelle Tanner or Bart Simpson? That's what Dave and I conversed about.

On Friday, this sentence popped up on my alerts on my phone...

I took a minute to realize that WC=wheelchair........at the same time I spotted that I had a voicemail from a local number...

I checked my voicemail and low and behold, same type of message from the DME saying that the chair was approved and that she was going to push the order through!

I was so excited!

No having to appeal insurance?

And then on Saturday, a six page letter from our insurance popped up in our mailbox....and all I could focus on were two words on the second line of the first page. 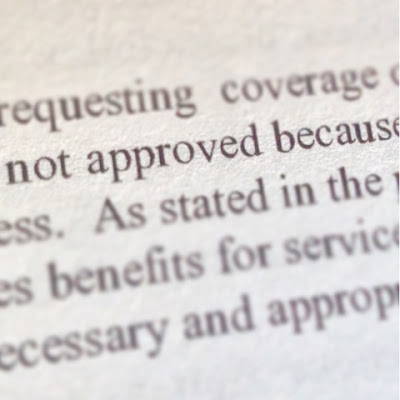 According to this letter, the chair is not approved.  So I am starting our day on the phone trying to figure things out.  Did someone at our insurance agency go back and read the letter of medical necessity and overturn this denial?  Hopefully.  I'd say since two different places told me it was approved, that things are in Isaiah's favor.  I am crossing my fingers that this is some kind of clerical error on our insurance's end.

I'll update when I can....let's hope it's a happy update with lots of happy exclamation marks about this letter being a mistake.

Update: I called our insurance.  The wheelchair is approved. :) It was initially denied (thus the letter) but after some review, they approved it.

Hooray wheelchair!  Isaiah will soon be rolling outside the house. :)
Posted by OIbelieveinIsaiah at 6:30 AM

Email ThisBlogThis!Share to TwitterShare to FacebookShare to Pinterest
Labels: wheelchair