While down in DuPont for Pam, we took advantage of being in the building and when leaving day number 2.  We stopped in at Lawalls (the place we are working with to get Isaiah a helmet to correct some things with his head) to check on the status of his helmet approval.

Helmets are sometimes needed for kids who have torticollis (which is when a baby leans to one way and his chin points to the other).  Torticollis is corrected with certain exercises...that Isaiah can't do as they put Isaiah at risk for fractures.  whomp whomp

Isaiah's head is flat in certain places because of the torticollis and because he's laid on his back the majority of the time (thanks to the c-pap) for 7 months; the helmet will correct that. 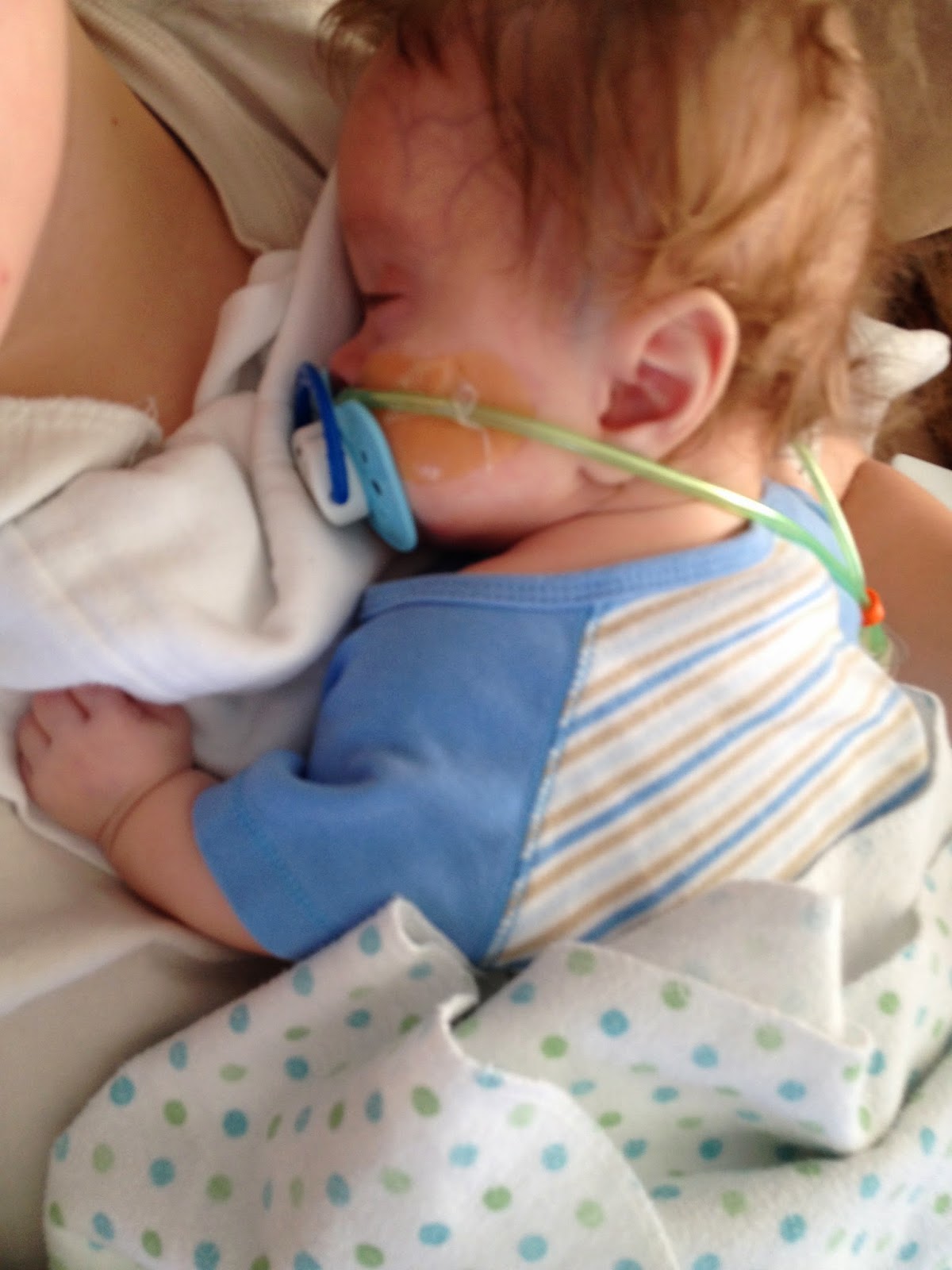 It'll also help with the bulging that's occurring on the right side of Isaiah's head. 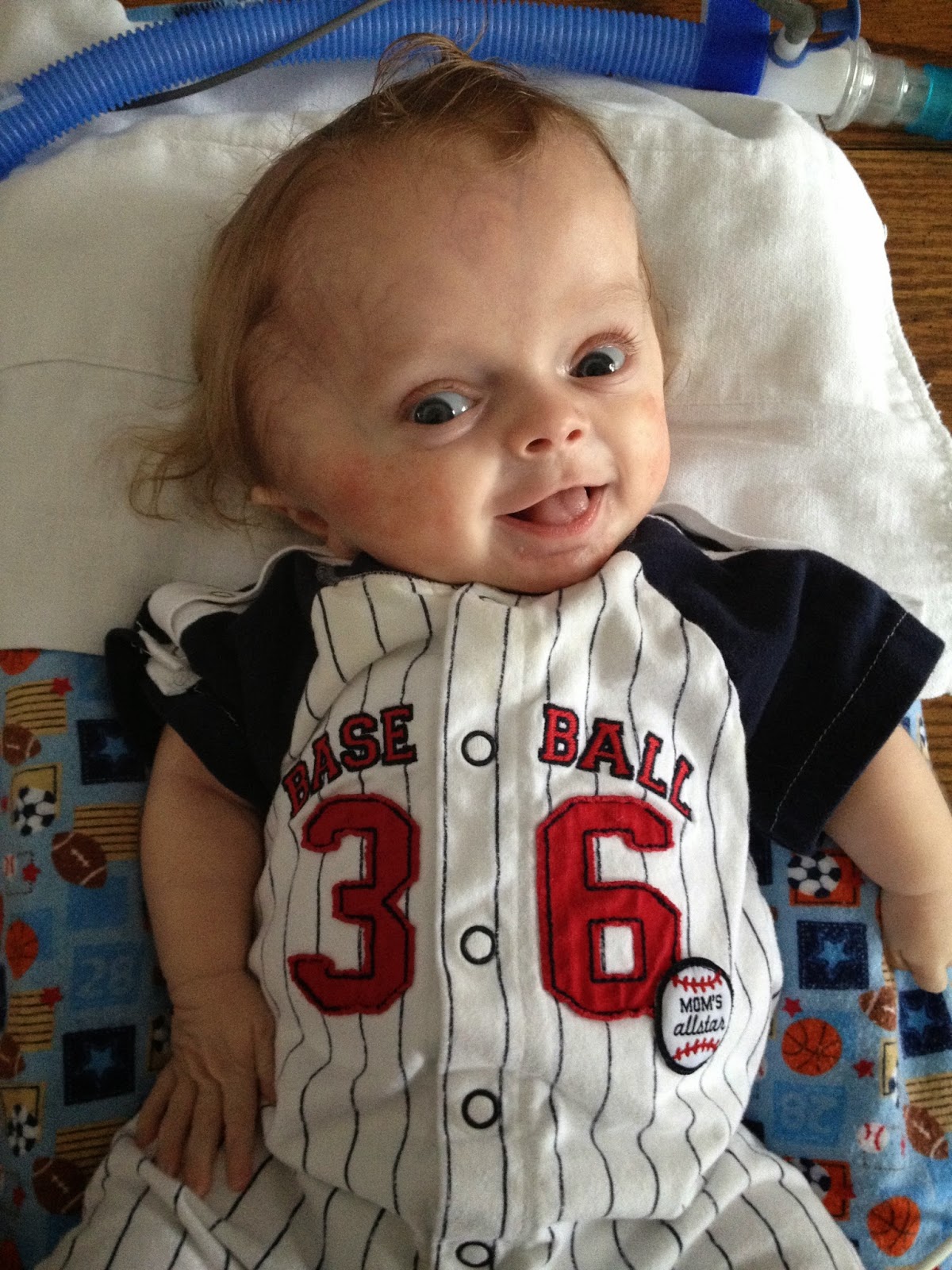 Normally helmets are denied by insurance, but since Isaiah can't do the exercises, guess what, Isaiah's insurance approved his helmet! Ahhh!! Normally a helmet costs about $4000 so this is a huge help for us.

Since our insurance approved we jumped on getting him molded for his helmet.

I sat on a bed, draped in a sheet, and held Isaiah while they put the plaster of paris on Isaiah's head.

They first placed a sock-like thing on Isaiah's head to protect him from all the gunk as best they could.

Isaiah was crying a lot so I was in a foul mood not knowing how to help him (thus, the face below)...

Isaiah calmed down some once the sock was in place.

Then there was drawing, which didn't go over well.

And then, the real, slobber-everywhere-cry because the plaster of paris started...

He had to sit with this on for a few minutes to let it harden.  The pictures stopped above because he was really, really mad and I started to cry.

Once it was off, we rubbed Isaiah down with a few wipes and let him calm down.  We chose a plain blue design for the helmet (I hope to decorate it, but we'll see).  It should be in next week! And then he'll begin wearing it.  He's expected to wear it 23 out of the 24 hours a day.  Poor kid...it will be worth it to reshape Isaiah's head.

We're up for a new challenge, though.  How do you get a nasal cannula over a helmet?  We'll be facing that challenge once the helmet comes in because Isaiah's sleep study didn't go as well as we hoped and he now has to sleep with the c-pap.  (Big huge fat whomp whomp.)

He has mild to moderate obstructive sleep apnea.  During the sleep study, he had 26 episodes with his breathing; 9 of them involved his oxygen saturation level going below 90% (You want it really to stay above 92%).  We have to do another sleep study (booooooooooooooooooo) in 8 weeks while he is on the c-pap to make sure the pressure is efficient for him.

There are positives.  He only has to wear it at night time.  He can sleep without it during naps, so we only have to fight him about it when putting him to bed at night.  He's slept with it the last two nights and so far hasn't needed any tape.  Hopefully we'll keep it that way.

Another positive is that when his oxygen does dip, he does a great job bringing it back up himself (without someone having to shake his foot to wake him).  The problem is that he isn't getting a restful sleep, which he needs to grow.

He had blood drawn on Monday before Pam and his CO2 level was in the normal range, which shows he is doing a great job expelling his CO2 (which was his issue back in September).  Given he had been completely off of the machine for a month, I'd say that's a major win.

The bummer (well, one of them) is we're going to keep him sleeping on his mattress pad.  We were going to stop that and just have him sleep in the crib without it starting after this Pam treatment, but the mattress keeps him comfy and still so hopefully the tubing will stay on him (so hopefully we can avoid any taping it onto his face).

I may have cried on the phone to his pulmonary doctor when he told me...And then I may have gone out and bought Dave and I ridiculous amounts of Maggie Moos ice cream.

I'm glad we know Isaiah needs more time on the machine...but it's just a complete bummer.  I was truly hoping to be past this chapter of his life and it turns out there's a few more pages.

Blah.  To add to the blahs, Isaiah's ears are definitely hurting him (I learned this the hard way when giving him his sponge bath this morning.)  After I posted this picture on Instagram of Isaiah stating that his temperature went down, it went back up... 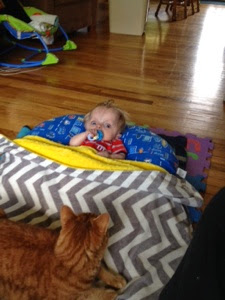 so the tylenol regimen continues.

I do hope everyone else is getting to enjoy the amazing weather.  We're hunkered down, watching as much of the Disney Channel that Isaiah would like to watch, and cuddling (cuddling is obviously the best medicine).

Happy Friday, everyone!
Posted by OIbelieveinIsaiah at 10:35 AM