Yesterday, OI broke Isaiah's left leg.  He was doing so well.  He rolled over in such a natural way, even grabbing on to the bar of his toy and to hold himself up! 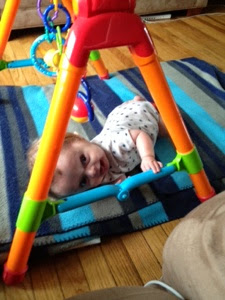 He wiggled like crazy all morning...then he started to whine while sitting in his chair.  I went to pick him up...he wiggled and thought it was fun...causing him to quickly start slipping out of my hands.  I balanced him on the chair he had been sitting in (on his legs), grabbed him by his torso, and pulled him onto the couch.  At the time, I thought he would have broken a part of his torso, but he stopped crying after only minutes.  I thought "phew, somehow he's ok." 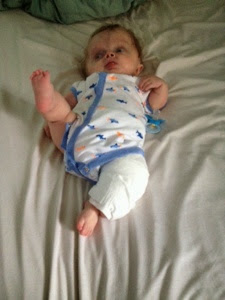 Then at PT, I noticed Isaiah wasn't reacting like he normally would when his physical therapist was tickling his leg.  I blamed being exhausted since he was up a lot thanks to gas and no morning nap.  I put him to bed for his afternoon nap and he fell asleep before I even got his pulse ox on him.  I went to pull his sock off of his left foot and put the pulse ox on, and he woke up screaming like crazy.

He fell back to sleep.  I thought "Goodness, he's just so tired!"  He woke up 20 minutes later screaming.  Fell back to sleep.  Woke up 20 minutes later screaming.  I thought that maybe it was gas again since both of his legs were pulled up so I gave him gas medicine.  We had lunch plans, so I put him in his car seat and we went to a nearby restaurant with friends.

He got through the whole meal with mostly smiles; needed a bottle and I was able to transfer him from the car seat to my lap with minimal crying...and the fussing that he did make I thought was the normal "FEED ME NOW" fussing.

I noticed then that his left leg was laying dead compared to his other limbs; it reminded me of when his arm broke. 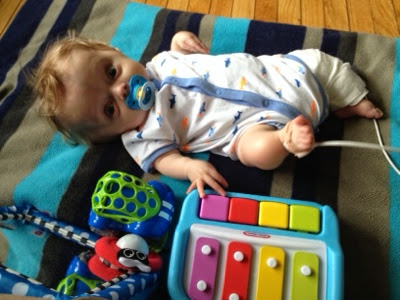 I waited to decide until Dave was home (as I tend to blame OI for every tear all.the.time.), and kept him as comfy and still as possible until then.  I gave him regular tylenol so he had some form of pain relief, and it helped him naps comfortably and solidly for an hour and a half.  Once Dave was home, he agreed about Isaiah's leg not moving and that he was very much protecting it so we decided once it was time for more tylenol, that we'd give Isaiah his pain meds for fractures.  I also emailed his doctor.

His doctor said we're doing it all right...we have him wrapped and medicated.  As long as he's filling diapers and sleeping, he should be ok.  If there's trouble, we just have to make it until Monday when his ortho is in the cast room at DuPont and he can get an x-ray and wrapped however he sees fit (he's so well versed in OI, we're lucky to have someone with so much experience working with Isaiah).

Happy first Mother's Day to me, right?  I had a plan to make a "Happy Mother's Day"post, but well, OI took over.  Maybe if Isaiah is resting comfortably later, you'll get a bonus post. :)  For now, our morning is full of gentle cuddles, some careful playing, and as much Disney Channel as Isaiah wants to watch.
Posted by OIbelieveinIsaiah at 9:44 AM