Welcome to my Brain

This weekend, it took all I had to not email Dr B or call in to Isaiah's pediatrician for an appointment.

Most times I'd convince myself that Isaiah's moments of hysterics were because he was teething.

But then he'd flip out when I was trying to sit him in his travel high chair and I'd wonder if he had a fracture somewhere. (and then I'd think "but he sits up in my lap and in his at home high chair just fine.")

I could/can not figure it out.

I'd have moments of:

"Could his shunt be malfunctioning? His soft spot is still indented.  I think it'd be puffed with fluid if it were malfunctioning.  I don't think he has a fever."  This darn thermometer better be right.

"When did he poop last? Oh right, this morning."  You're welcome. 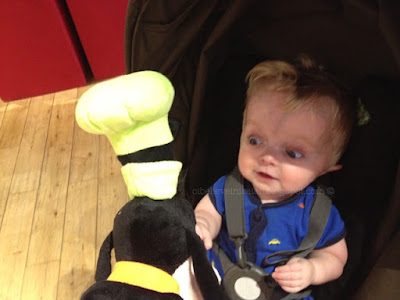 We went to a lot of stores because they offered Isaiah enough of a distraction that made him happy without overwhelming him with whatever he was going through.


And then we'd hit bedtime and things really got tough.  Friday night we were up for hours.  Hours of moaning, whimpering, crying and gagging himself....it was awful.  Dave and I felt completely helpless and also tired.

Tylenol did nothing.  Motrin was the only thing that got him back to sleep...this worried us that it was something more than teething.

Saturday morning was awful but in the afternoon he was back to normal....then he was up at 2:30am and we stayed up a few hours until I decided to try a bottle of milk...A middle of the night bottle?  I don't want to go backwards. But he hasn't been eating much at all...

I cried in the shower.  What if he's in so much pain and I am not doing what I should be to control it???? Maybe we should go to the ER...

But then he would fall asleep and he'd wake up happy and babbling and wanting to play. 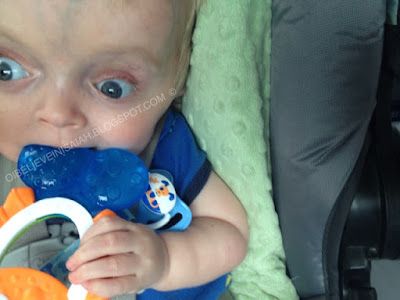 and also wanting to bite the daylights out of everything.

I checked his gums and there is a new tooth breaking through, a bottom canine tooth.  Could that really be the cause of all of this misery?  Really?

So, moms and dads, could one tiny canine really be causing Isaiah to:
-be up all hours of the night
-not want to eat anything but crackers
-drink half as much as normal
-act like jekyll and hyde? Completely normal one second and then hysterical the next?
-make it so he doesn't want to sit up?

Regardless, we're trying not to push him, trying to get him to eat, and offering meds if he seems to be in pain...

and I am trying to stifle the crazy. <3
Posted by OIbelieveinIsaiah at 7:00 AM