This week, Isaiah had his first dentist appointment.  To some, we're a bit early, but given that Isaiah already has 10 teeth (with an 11th popping through), and that he has Dentinogenesis Imperfecta, we want to be as proactive as possible. 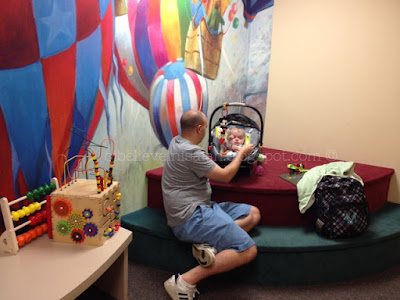 The dentist did confirm the DI. Dentinogenesis Imperfecta is common in those with OI.  For those with type III OI, there's a 50% chance of having DI.  Basically, like the bones are brittle, with DI the teeth are brittle.  They wear down quickly and are discolored.  They are susceptible to cracking and chipping.  We knew as soon as his first teeth were popping through the gum line that Isaiah had DI as his teeth were clearish in color (instead of white). 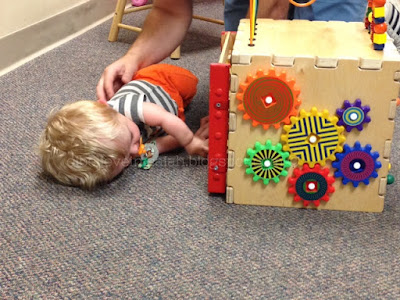 I am a crazy lady about brushing Isaiah's teeth.  I also kind of refuse to offer him any hard foods (if he asks, I do allow it, but I just avoid eating most hard foods in front of him to avoid it in general).

Isaiah isn't a juice drinker, which I consider a major positive when it comes to his teeth.  He sucks a pacifier, but so far his teeth aren't in enough for the dentist to be concerned.  He does still drink milk from the bottle (it's the only way he will drink it, the stink) before he goes to sleep, but we brush his teeth before going into the crib and he never gets to drink milk in his crib or while hanging out. 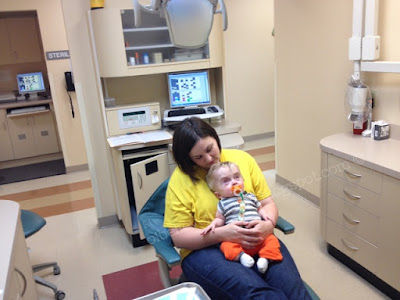 All in all, he handled this experience well.  He did cry and purse his lips shut tight, but he eventually let the dentist in to get a look at all of his teeth, brush them, and put a fluoride treatment on.

We're thrilled that his teeth look wonderful.  No tarter and no sign of any wear-down.  (Once Isaiah shows signs of his teeth wearing down or damage like chipping, we'll be getting them capped to protect them.) 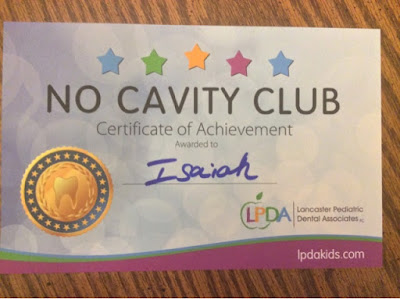 This sucker is going on the fridge!

Oh, and obviously I'll be expecting one of these certificates after every appointment. ;-)