The Night Before Disney

Twas the night before Disney
and all through the house,
we were all stirring like crazy,
getting ready for The Mouse!

Are you catching my ode to The Night Before Christmas here?  I'm such a nerd. 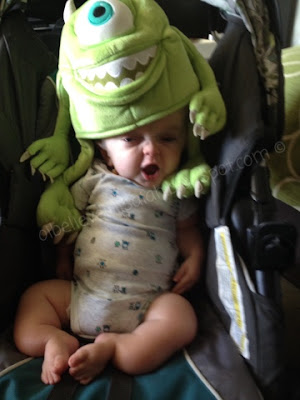 "Mom, you are so embarrassing!"


The suitcases were sitting by the front door with care,
In hopes that we'd remembered every Disney onesie for Isaiah to wear!

You'd think we'd be all nestled snug in our beds,
With visions of the Castle and stylish mice in our heads!
But alas, instead we worried, gripped with fear and dread,
A flying (empty) shampoo bottle almost put the ax in our plans, by possibly landing on Isaiah's sweet head!

Ok, enough of my butchering a classic...

So yes, a shampoo bottle seriously almost killed our vacation, less than 12 hours before our departure time for the airport.

Everything was going extremely well.  I had cleaned the shower just before giving Isaiah his bath.  I debated throwing this bottle out but I was trying to use every ounce of shampoo (you know how it goes...) so I quickly popped it back on the shelf...that is about 3-4 feet above Isaiah's head when he is in the bathtub...  As I was bathing Isaiah, we were having a great time playing, and as I turned my head for literally a second to grab the washcloth from the sink counter, the darn bottle apparently decided to take a bath with Isaiah, and all I heard was a huge bang and Isaiah crying.

And there was the shampoo bottle, sitting right next to Isaiah's head.

I never thought I'd be afraid of an empty shampoo bottle.

But that bottle (a huge BJs Wholesale Club-sized shampoo bottle), put the fear in Dave and I that night.  If that bottle hit Isaiah's head directly, it very much could have caused a skull fracture, a brain bleed, and who knows what else.

The bang was so loud.  I frantically calmly (as possible) got Isaiah out of the tub and onto our bed.  He was hysterically crying.  I grabbed the ipad and pulled up one of his favorite games and he calmed down immediately and started playing.

I messaged some fellow OI moms for advice.  There was no mark, no bump, on Isaiah's head.  It could have hit the plastic seat he was sitting on and not him.  That would explain the insanely loud bang.  The rest of the night was tough, though.  Isaiah hardly took any milk.  He kept crying on and off.  He'd wake crying from his sleep.  We spent the night tossing and turning asking each other if we should take him to the ER...but we weren't 100% sure the bottle hit him.  Given the noise of the crash, we decided that if it hit him, it would have had to of left some kind of mark, right? 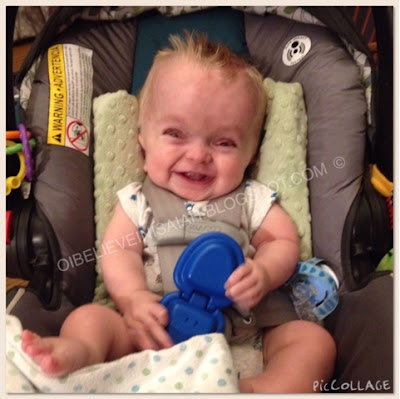 This picture was taken at 5am on departure day.
(Am I the only one who thinks the lighting makes his veins look non-existent?)

We didn't know what to think, but we took Isaiah's cues (meanwhile, I had emailed Dr B what probably looked like crazy-mom emails), took many deep breaths, and drove down to BWI airport.

The flight went extremely well for the most part....except it was good that we had the oxygen.  Turns out his oxygen did dip when we were at the highest altitudes.  His color never changed.  He never acted lethargic.  We turned on the oxygen on anyway because, what would it hurt?...it's better to be safe than sorry.  (For those in the know of oxygen sats, he normally sits 98-100%, but dipped to 88-93% when flying high)

Oh, ps, I also threw out that shampoo bottle and will never ever ever use that shelf again. ;-) 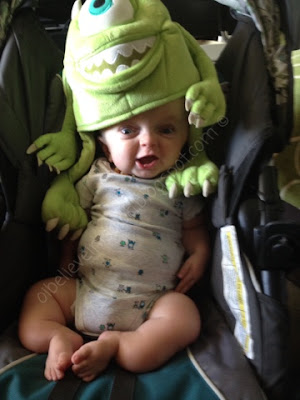