We've been planning our trip to Disney for some time...but one question bugged us for so very long.  Do we drive or fly? 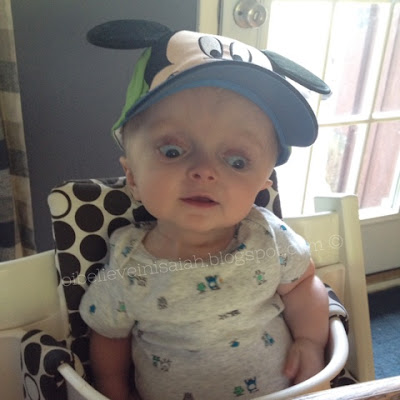 There are pros and cons to both.  The biggest pro/con for us is the time.  Driving takes 14 hours (not counting stops) but flying just takes about two (of course that doesn't count the travel time to get to the airport, or the wait in the airport, but it's still significantly less time).  There is also cost.  Driving would technically cost more for us because we have Southwest "points"...so no paying cash for tickets as compared to paying for gas.

Before we made our decision, we asked Isaiah's doctors at duPont about their thoughts on flying.  Because of Isaiah's history, it's important to us that they gave their blessing, especially Isaiah's pulmonary doctor.  He originally said we should have zero issue with flying and wished us lots of fun...but after some thought, wanted to do a test to be sure Isaiah could handle the change in oxygen.  We scheduled a test called a spirometry to take place before the last day of Pam. 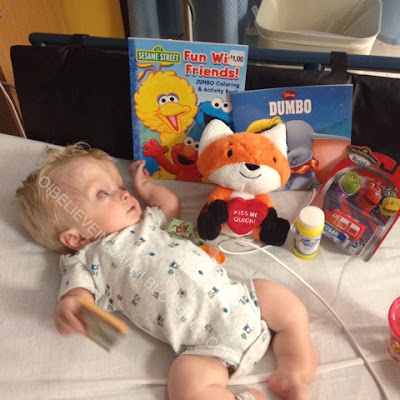 This picture is from the last day of Pam in May.  Isaiah came into Day Medicine like a bear because of his Spirometry test...Isaiah's nurse called Child Life and had them come down to surprise him (and his OI buds) with gifts to cheer him up.  We were so appreciative and it really did lift his spirits.

According to Dr H, at room air (what we breathe everyday) oxygen is at 21%, but when flying, it is measured 15-18% on an airplane.  Just walking from a seat to the restroom on a plane, a typical person's oxygen level can dip.  We were already planning on bringing Isaiah's pulse oximeter machine (that is a machine that measures his oxygen level and heart rate using a sticker attached to his foot. He sleeps with that sticker so that we can monitor his oxygen level because of his Apnea) to monitor his oxygen level if he napped on the plane..turns out he'll be wearing it the whole flight.

Isaiah's normal oxygen saturation sits between 98-100% so we aren't expecting a problem if his oxygen dips, but want to be prepared.  The test that he took at duPont involved wearing a mask that lowered the oxygen he was breathing to the levels of an airplane.

Isaiah HATES masks.  He actually should be using a cpap mask at night but we still use the nasal cannula because it's less of a fight.  His hatred of masks was evident during his test (which showed Dr H first hand why we are saying no to the cpap mask), which meant the pulse ox wasn't completely reliable; his crying throws the whole thing off and it can't accurately pick up his pulse.  He fought 90% of the test until he finally just gave up (there were tears from this momma who was holding him and trying to keep him calm).  Dr H was there and even held Isaiah's iPad while Mickey played to try to keep him calm.

We got through it.  Even with the crying, the lowest "dip" in his oxygen was a healthy 93%.  Although we all agreed that we think Isaiah will be ok on the plane, we'd prefer to err on the side of caution so we will be bringing an oxygen concentrator along with us on the plane to and from Florida.  Dr H checked out Southwest's website and printed out their letter and also contacted our oxygen company to provide us with the travel oxygen concentrator.  (A concentrator is a device that concentrates oxygen from the air to supply an oxygen enriched gas mixture if needed.  We won't be bringing any oxygen tanks with us.)

We've also contacted Southwest and the TSA to give them a heads up about everything. 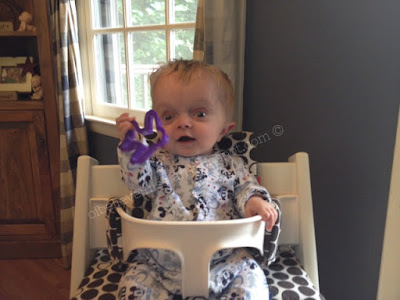 The TSA will be providing a "helper" for us in the airport to help us get through security and get to where we need to go.  Southwest has us marked "medical" so we'll be boarding the plane first.

I have a letter from Dr B about Isaiah's OI and his fragility if the TSA feels that they need to pat Isaiah down....this scares the daylights out of me.  I'd prefer to strip him than have anyone touch him (based on experiences with some medical professionals in the past being grabbier than safe....I told the woman I spoke with about this on the phone and I likely got us flagged to all get searched.  LOL

We bought Isaiah his own seat with our points and plan to bring his infant car seat for him to sit in at take off and landing, just so we have the option.

Ok, so sorry for the boring-ish post ha (I call em like I see em), but this is just a fraction of what we've had to do to prep for our upcoming trip.  Hopefully I'll have a post ready soon about how we're prepping for Disney itself! (yaaay)
Posted by OIbelieveinIsaiah at 6:30 AM