Gosh, playtime is looking so different now!  Mr. Isaiah has been holding his head up a lot more when he's sitting up so we have been squeezing in a few extra moments sitting here and there throughout the day... 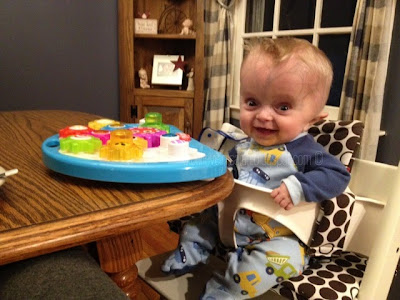 We have to watch.  We have to remember that he has a moderate case of kyphosis, which means his spine is curved.  His kyphosis is in his lower back.  It was diagnosed at 12 months.  Dr. B believes it's from the weight of his head when I would sit him up before he was ready...but now Isaiah is sitting up on his own so I am hoping that means his spine is strong enough to support the weight. 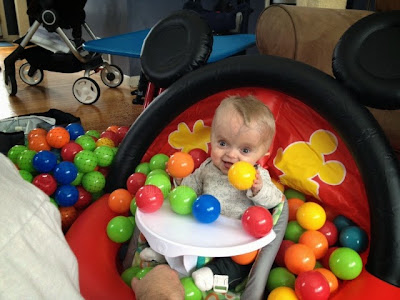 So, we usually only put Isaiah in a chair to eat, but we've been extending his time no more than 10 minutes past that to give him some play time.  We've also added in an extra 10-20 minutes sitting in his boppy chair- a little ball pit time anyone? 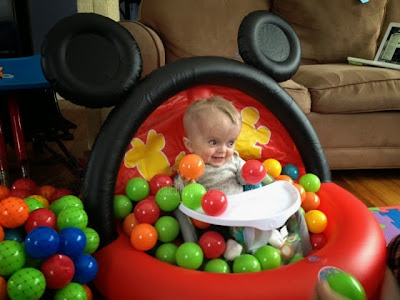 I have a constant argument with myself if I am making the right decision to let him sit up...if the kyphosis gets worse, it could really affect his lungs...but if he is pulling himself up from the reclined position, it should be ok, because he's doing it.  Himself.  Hopefully it's ok.  I think so anyway.

It's a good conversation to have with Dr B when we see him next...

Besides this still pretty new position, we're also working on getting Isaiah to turn to his left. 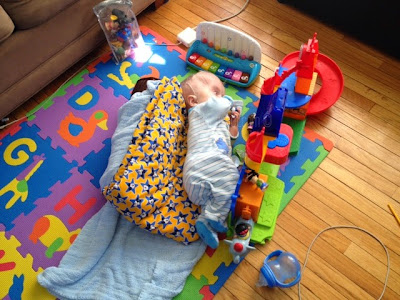 Isaiah used to have a pretty severe case of torticollis.  His head was always facing the left, tilted.  We were so very focused on breaking that torticollis and getting him on his right did that.  He rolls onto his right side completely on his own because of it.  He actually sleeps on his right side too.  It's done wonders for the bulge on that side of his head...but alas, he now has a bulge on his left side of his head, since he's never on that side, so we're working on promoting him to roll onto his left. 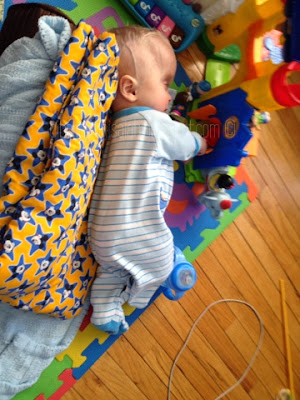 He's already doing great and tolerating it well.  Hopefully just a few days of forcing the position with blankets and he'll be doing it on his own.

But for now, I am on break-watch.  Earlier this morning (the reason I am late posting), he rolled onto his belly from his right side.  Completely onto his belly!  This is big!  But it scared the poop out of him (and me!). He bopped his head on a hard toy and did roll over his right arm so I am trying to figure out if he's ok.  He started hysterically crying immediately and couldn't roll back over so I had to roll him myself.  He's randomly crying but it's snack time now....so I am off to feed my big boy and hope that is the reason he's crying.  Let's avoid a skull fracture, ok Isaiah?

Bah, one day we will be able to celebrate a milestone without a fear of it affecting his bones, right?
Posted by OIbelieveinIsaiah at 10:22 AM