On Friday, we had an appointment with Isaiah's pulmonary doctor (that's the doctor that works with us on Isaiah's breathing). 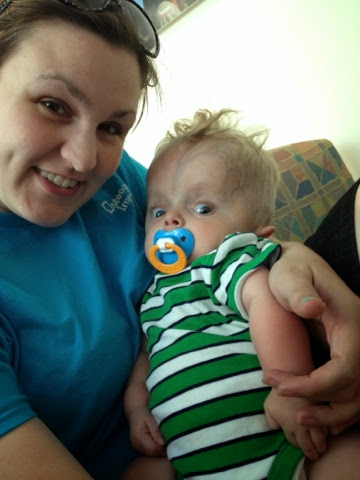 While waiting to see the doctor, we realized what day it was; Isaiah was transferred to DuPont from Jefferson one year ago exactly.  Like, to the minute, people. 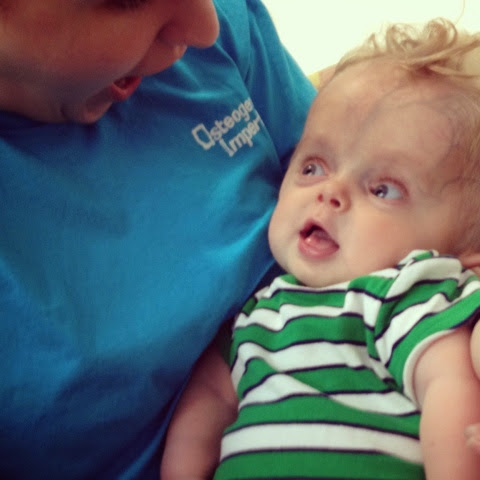 I remember because we had been told before we had Isaiah that no one would be able to ride in the ambulance with Isaiah to DuPont, so we planned to discharge as soon as he left Jeff so that he had to time to be processed into DuPont...but well, on the day of the transport, the EMT looked at Dave and I and asked us which one was coming with them.

Oh well, it worked out.  He got there safe and sound...but you can bet that he will never ever ever ever go on a ride like that by himself again. ;-)

Anyways, back to the appointment... 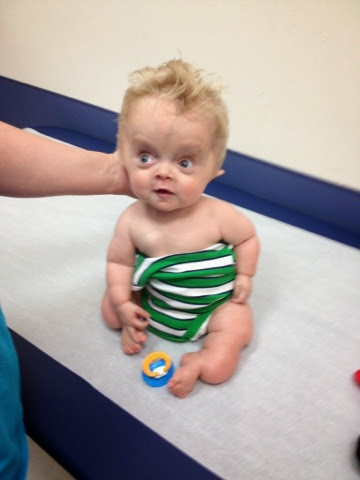 Isaiah is doing well.  They want to transition him from the cannula [that he had been using for his c-pap at night] to a mask.  The switch is because Isaiah turned one, and just like that, learned how to rip the darn thing off his his face.  In his sleep.  He hates it.  So, we need to talk with the oxygen company to get that going as the mask the doctor gave us doesn't match up with the cpap machine we have and all it does is beep beep beep about a circuit leak. 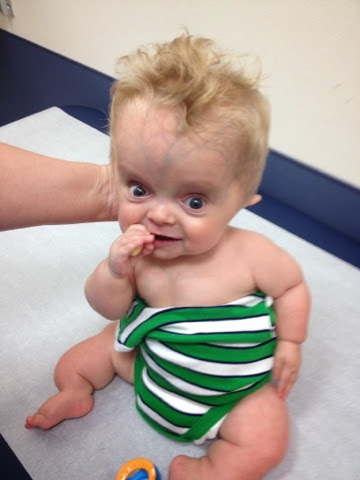 His doctor recommended Isaiah continue his nebulizer treatment of Pulmacort, as it is full of benefits and "no negatives".  I was hoping to end it so we could get a real night time routine going.  But oh well..maybe in the spring.  The doctor thinks it's best since we're coming up on winter and we want to keep Isaiah's respiratory system as strong as possible. 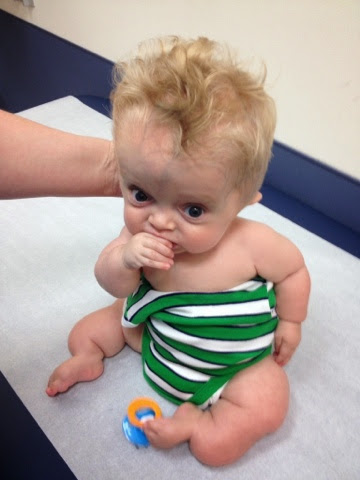 Annoyingly, I forgot to ask about the sleep studies!  The only mention of those really was that, like we already knew, he has more in his future.  (Hey Dave, not it.)  The older he gets, the harder they will be.  The next one will likely be December or January.  Hopefully by then he will be strong enough to sleep without the cpap anymore.

The doctor's Fellow took a look at Isaiah and she believes he could have a canine tooth popping through soon in the top.  It's definitely possible but I'm not placing any bets on it.  Also, she and his doctor took a look in his right ear for me because it's been draining some dried blood lately.  Turns out all of Isaiah's digging in that ear caused a scratch.  I've since cut his nail lower than ever before, threatened him with mittens, and put cotton in his ear for a few days.  They said his digging is another sign of teething, again we shall see.  ;-)

I tried to get him back in his helmet this weekend, only to be met with hysterics, and I'm a sucker for them.  We'll be trying again today since he's in better humor.

We're looking forward to a quiet week this week and hope the same for you. :)
Posted by OIbelieveinIsaiah at 9:08 AM