Yesterday (on a very wet and dreary day), Isaiah and I had his one year well-check at his pediatrician.

I had some forms to fill out (questions about any possible "concerns"...).  It kind of made me laugh; I answered all of the questions with "no" but should have technically circled yes for every single one...I know from all of the other OI parents that some things come later to OI kids so I'm not technically concerned.  Everything will come to Isaiah in time. 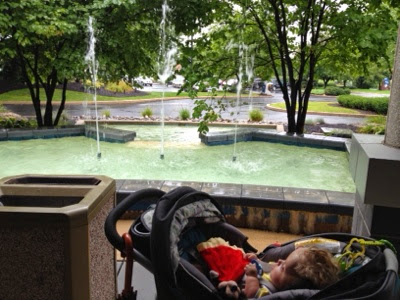 According to their measurements, Isaiah weighed just under 14 pounds (I'm not surprised given he's been sleeping through the night which means he's down a bottle.  He's working on eating more during the day.) and I got his legs stretched so that he measured 23.5 inches in length!  He grew over an inch in a week! (Ha, not really, he was just happy to stretch for me.)

Isaiah is in a good place now so the appointment was quick....then it was time for his shots. 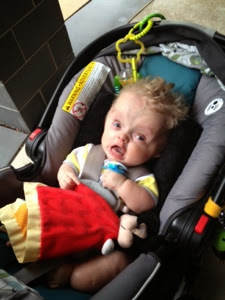 And there were tears.  Copious amounts of tears.  First from Isaiah, then from me because I just felt awful seeing him in pain, then from one of his sweet nurses.  Apparently my love for Isaiah is very apparent and caught her off guard.  Most mommies are probably braver than I am in front of their kids, and I'm working on getting better with needles, but I just really dislike causing him pain.  This poor kid gets poked so much...he goes through so much....it's just hard sometimes.

Since his appointment, he's been a bit of a Grumpy Gus.  We had spent the rest of yesterday relaxing, napping, and cuddling but he still struggled.  Once we hit bedtime, he was up every 15 minutes until 3am, when I finally switched to baby Advil from Tylenol and gave him a bottle (thus wrecking our sleeping-through-the-night streak).  He was basically pleasant all morning, even waking at 6:30am! (UGH.  I am tired.)  He had some grumps when we went over bumps with the stroller when I decided to take him out shopping this afternoon, but I'm confident that he's fracture-free (sometimes OI kids fracture when getting their shots, thanks to the startling), I think he's just sore where he got his shots and he may be leery.

Later this week we have a DuPont visit on the schedule; we'll be seeing his pulmonary doctor to check in on everything.  We are hoping to stop his daily nebulizer treatment of Pulmacort and come up with a solution that doesn't involve tape for his c-pap at night.  Isaiah has recently decided that he doesn't need his c-pap anymore, as he rips his cannula off of his face as soon as it's put on.  It's loads of fun, really.  ;-)

Posted by OIbelieveinIsaiah at 3:13 PM