This morning Isaiah and I had water therapy.  I was all excited to have a morning slot this week because this kid is normally such a morning person.

(FYI: Don't ever ever ever have expectations with a baby.  There is no such thing as"normal", especially when you make plans. ha)

Well we had one horrific night.  Isaiah was up every half hour crying.  We gave him tylenol to see if that would help and it didn't do a thing which had both Dave and I concerned that OI was to blame.  I finally gave Isaiah Motrin at 3:30am and that did the trick!  Isaiah slept like a log until I had to force him out of bed for water therapy (at 3:30 I had planned to cancel it.  I almost texted his PT right then...but I figured that if Isaiah had something broken, we'd be able to pin point it at therapy.)

Even though I woke him, he was chipper as could be, ate some apples and puffs, and had the best water therapy session yet.  He splashed, he reached, he kicked, he laughed. (I'm so glad I didn't cancel.)

When we got back, I decided to put off the bath for a half hour and hang out outside because it's supposed to feel like 95-100 degrees later and I want to give Isaiah time outside...and the breeze? fabulous.

Within 2 minutes this happened... 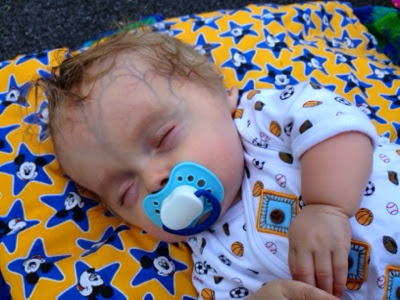 (Check him out! He passed out on his side!)

Exhausted baby alert!  When Isaiah woke up, he was all smiles and I got a good look at what looks to be his first tooth cutting through!!!  It's on the bottom and it so cute. 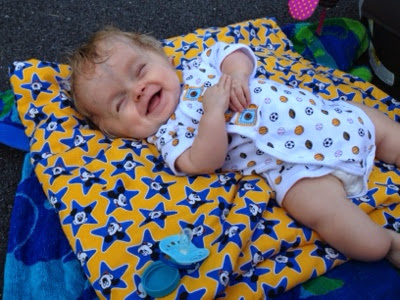 Can I just tell you the relief that went over me?  Here I thought maybe he had something broken, or maybe he's feeling the fact that Pam is due soon, but amazingly he's experiencing a normal baby problem.

With that normal baby problem comes a bit of an OI problem.  The tooth looks clearish, definitely not white.  This is a sign that Isaiah could have Dentogenesis Imperfecta.  It's common with severe OIers.  It means that if he has it, his teeth will be brittle.  I will start looking into when they get capped (yup, they'll cap baby teeth with DI to protect them), and today we'll be introducing a baby tooth brush into his life.

Oh well, it was nice to enjoy the normal for a moment.

Another reason Isaiah was likely thrown off last night is because he didn't go to bed until 9 o'clock!  For Father's Day, I got Dave 3 tickets to last night's Barnstormers game (They are the local baseball team in Lancaster).

Obviously, he had to bring Isaiah and I to the game. :-P

When we were on our way to the game, and I was telling Isaiah where we were going, this was his reaction: 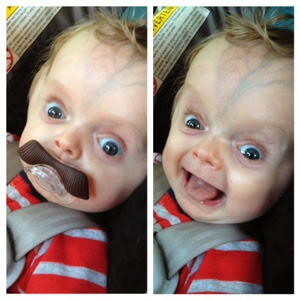 haha, ok, not quite like that. but I feel like his expressions say "We're going where?!?! YAAAAAY!"

It was much more crowded then we expected. 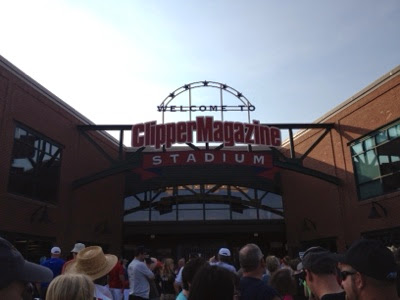 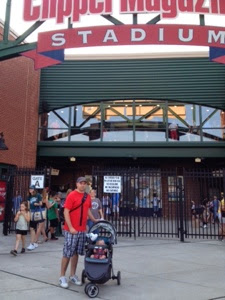 We got a handicap seat so that we could bring Isaiah's stroller in with us.  The bummer was that our seats were in the sun and it was HOT last night. 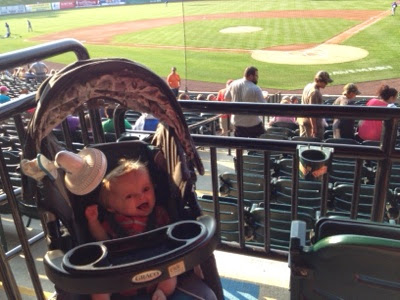 At first, Isaiah didn't mind.  Once the game began, I turned him around (toward the sun) so that he could see the game... 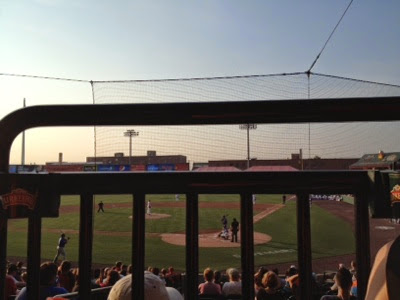 Well, sunshine and Isaiah don't mix so well, we tried, but we didn't last more than the first inning.

There was a lot of crying, a ton of sweating (even with his cooling froggy towel), and even some pooping (you're welcome).  (And it kind of didn't help that our seats were right below a LOUD speaker.) 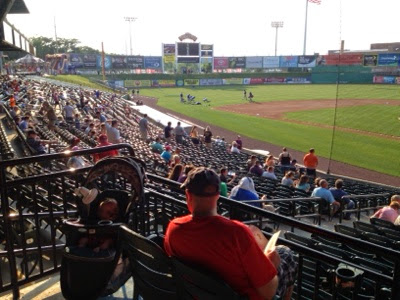 I was pretty upset when Dave suggested we leave, but he was making the right call.

I've been in a bit a of a lull lately...I'm really wanting to take Isaiah out into the world and do "normal" things....but sometimes I get smacked in the face with the fact that things aren't so normal, that we have our own normal, and that I need to accept it.

Our normal is fantastic.  I need to stop comparing us to other families and just enjoy us, because we're really pretty enjoyable. ;-)

Ok, so who has some teething tips?

Posted by OIbelieveinIsaiah at 11:16 AM