So last week Isaiah's PT agreed to try Isaiah out in his car seat! He handled it really well; he hung out for a whole 20 minutes! She suggested we try him in there every day and see how long he tolerates it. 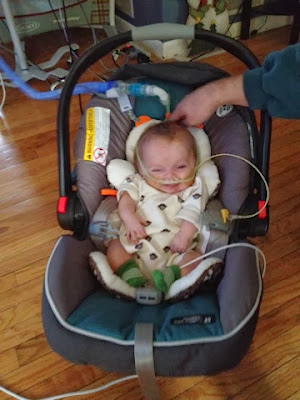 When Isaiah's PT came this week, Isaiah was passed out asleep (He had gotten his synagis shot in the morning; that shot protects Isaiah from RSV).  Luckily, he only slept for half the session (ha).  He woke up and showed his PT how big he can stretch.  He showed her how he sits more midline now (as compared to on his left).  He really wanted to see her, but she was to his right, so he worked really hard and turned his head all the way to the right for her! 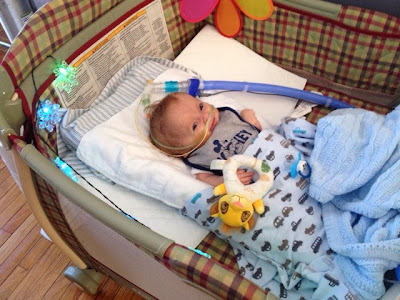 Since he was awake and happy, his PT wanted to try him out in his car seat again- strapped this time!

At first, he was all "woah woah woah, what is going on here?" 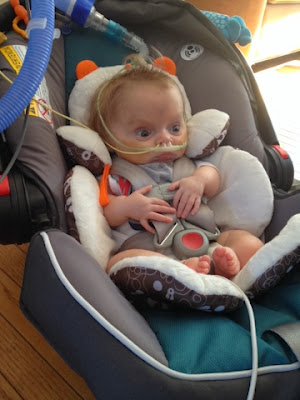 And then she showed him some toys and he was all "ohhhh this is fun!"

We do have to work on positioning his legs in the seat.  You can see how he sits kind of frog-legged in his seat, but since he's so new to the car seat, we want to take baby steps.  We'll get there. :) 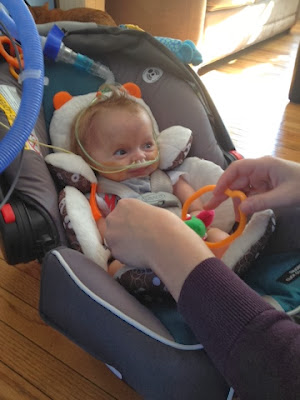 He only lasted about 15 minutes this first time with the belts....he shut down really fast, which had us concerned at first...but the culprit wasn't the belts, it turned out he was working on needing a diaper change.  And who wants to deal with that when you're having fun in your car seat? 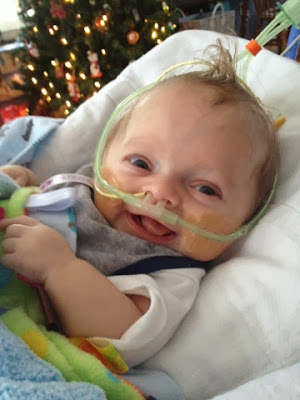 We sure are lucky.

On the bottle-feeding front.  Isaiah is slowly increasing his progress every day.  The first day with formula, we only gave him 10mL; he took 7.  The second day, we were ready with 20mL; he took 18! Yesterday was the third day with formula and he we had a whole ounce (or 30mL) at the ready, and out little eater took 26mL!!

We're SO proud of him!  He's working so hard!  I wish I had pictures showing the process but I've been keeping it dark because Isaiah likes the dark, ha.  I am trying to do everything I can think of to keep him happy and calm during the process because it does stress him a bit (so the last thing I want to do is distract him with my phone; he loves that thing).  We vary between the bottle and his pacifier during the 15 minutes because he just loves his paci.  Hopefully as we keep working, he'll need that paci less and less and want that bottle more and more during feeding time.  I'm planning to ask his doctors if we can try this at more than just one feeding a day, because I think he's ready and I think that the more we can associate the bottle with getting his belly full, the better it will be for his future eating.

<3
Posted by OIbelieveinIsaiah at 9:04 AM