You want to know a fun time in this household? Isaiah's bathtime. Oddly, it takes place on the dining room table. (Who want to come over and have dinner? ha)  He's gotten quite used to the routine.  Up until now, we've stuck with a sponge bath because that's what was successful in the NICU. (They knew what they were doing when they stuck those buckets and that pink pad in our bag on the way out the door.) 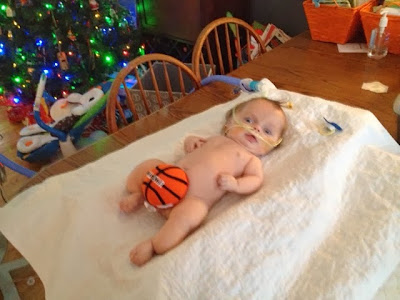 This kid loves being naked. Can you tell?

I can successfully give Isaiah a sponge bath by myself.  He's learned to help a lot too.  He lifts his arms and even his bottom for me to get everywhere I need to get clean. 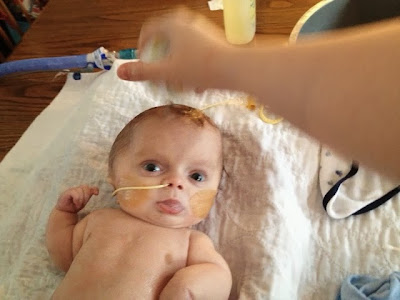 He could do without the rinse at the end, he looks kind of intrigued by the water in this picture, but usually he's shaking his head vigorously and yelling at me.

This weekend we decided to mix things up a bit.  Isaiah has never had a real bath- a bath where he is sitting in water.  It's partly because of the C-PAP (and how it's connected to electricity) and partly because I have my routine down darn it and it works well...but we need to get him introduced to water and he needs to like it.

We want him to begin water therapy asap.  There is a water therapy pool at the Schreiber Center that Isaiah's PT works for.  Once he hits 6 months (we're required to wait until the 6 month mark, I'm assuming because of the C-PAP, they want him breathing as well as possible), we will be there with bells on (ok, not bells, but bathing suits/swimmy diapers).

So, Isaiah got his first taste of a real bath...kind of.  It is still on the dining room table. 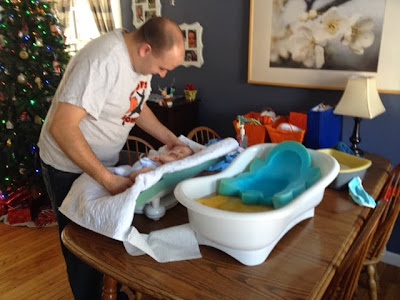 Dave weighed him first (he's 10 pounds now! Grow baby grow!) and then he gently placed him in the tub. 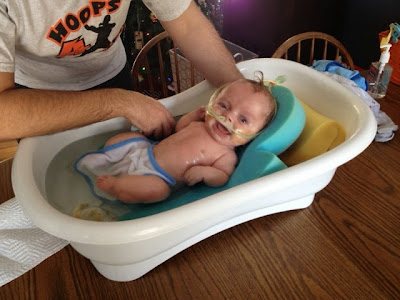 aaaaaaaand traumatized.  I've shown this picture to a few people and everyone thinks he's smiling. LOL. Nope he's screaming his adorable face off.  The water scared the crud out of him.  He was like a cat near water, he held his body as far away from it as he could.

And then all of a sudden...he stretched. 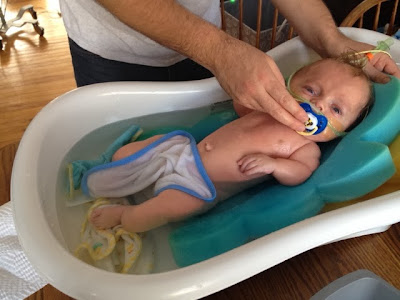 He was still crying, or attempting to cry, but it became less panicked and more whiney.  We kept trying to put that muzzle I mean pacifier in his mouth to calm him down, but he continued to whine through the whole 10 minutes.

He'll get better the more we do it.  I bet he'll love it like so many OI kids do.

Once he was out of his bath and dressed.... 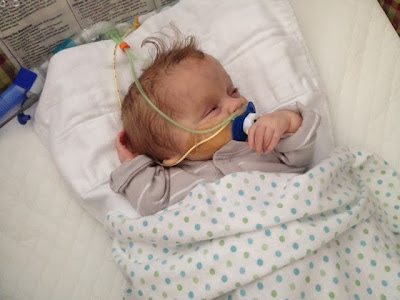 He was dead to the world for 2 hours. haha

We learned that this type of bath is a two person job at this time (so were sponge baths for the first few times), but it needs to happen at least once a week.

And for those wondering how he felt about life when he woke up? 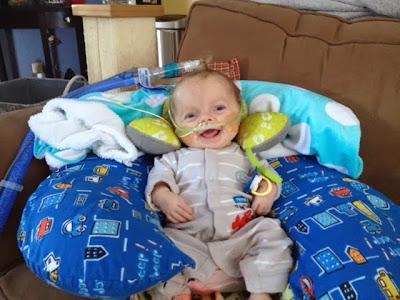 He was a happy camper...at least for a little while.

Isaiah is definitely teething.  He has 2 white bumps in his mouth already!  Weirdly, they are molars!  And only on the bottom.  The fact that they are molars has made it extremely tricky to find a teether that works.  He's happiest chewing on my finger; he went to town on it for a half hour yesterday.  Someone recommended a frozen wet wash cloth.  We tried that this morning and it was a hit so I now have a bunch of wet wash clothes in the freezer.

As soon as I can get a shot of those white bumps I'll share with you!  Unless...is that gross?  I'm not quite sure what's tmi (too much info) to share and what's not.  I swear, I've completely lost the tiny censor that I had.  I talk poop on a daily basis with anyone I interact with...so, yeah.....who's coming over for dinner? ;-)
Posted by OIbelieveinIsaiah at 9:02 AM