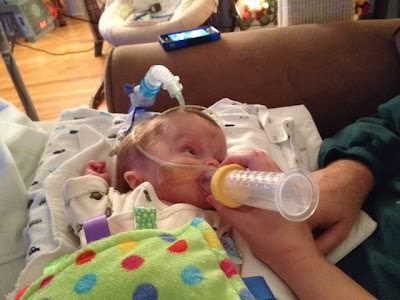 AHHHHH!!!
So, we may just be a little excited.  We've been given the go ahead to try Isaiah on a BOTTLE. AHHHHH! 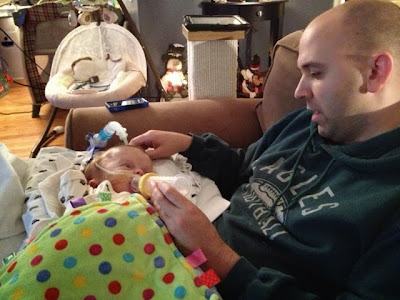 Dr Bober spoke with Isaiah's pulmonologist who gave it the go ahead! We need to watch that Isaiah's respiratory rate stays below 70; if he breathes quicker than that, he'll likely choke.  It turns out he can try WITH the C-PAP too!

We first had to try just 10 mL of water.  It was decided that water is a better choice than formula in case Isaiah were to aspirate.

Once he passes the water test, the goal is to prep a bottle of the amount of formula that he takes at that time, let him go to town for 15 minutes, check how much he ate, and then tube feed the rest for now. 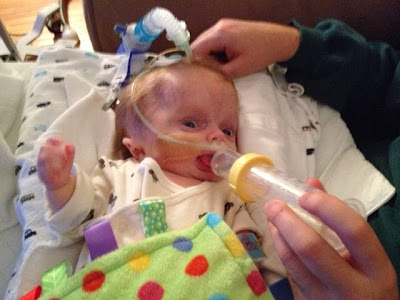 We have been having some trouble with this whole new adventure, though.  Isaiah seems a bit confused by the whole thing.  I blame myself really, for our first attempt with the water, I used a brand new nipple and apparently the tip wasn't open.  He was trying to go to town and just ended up frustrated....and so were we....I found it funny until we tried again the next day with a nipple that we knew would flow and he seemed positively angry at it and wouldn't even attempt to suck like he did the night before. BOO. 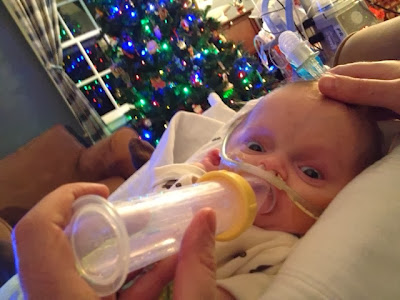 We're in the process of trying to figure out what to do.  We know his OT will be thrilled and hopefully she'll have some helpful tips.  We know he wants to eat with a bottle.  We know because he goes crazy for milk when it's on his pacifier.  Maybe we need to find a bottle with a similar tip as his pacifiers?  Maybe we just have to keep trying with this one and he'll get it?

Patience is important with this endeavor.

Even with the challenges that we're facing, this is still some AWESOME progress!
Posted by OIbelieveinIsaiah at 11:31 AM