Sorry for the lack of blog updating, we've been busier than our normal.

Isaiah and I are down in Delaware, spending our afternoons and nights at the Ronald McDonald House and mornings over at DuPont for his pamidronate treatment. We go for treatment about every 8 weeks.  For Isaiah, it's a three-four hour process each day for three days.  Yesterday was the first day, typically the toughest because it's when they weigh him, poke at him, and access his port (basically like an IV, but the needle goes into a port that isaiah has surgically placed at 6 months).  Today was supposed to be the easy day since he was already accessed. 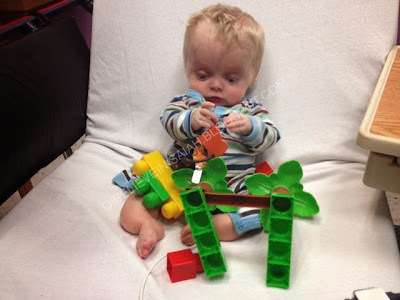 It started out great, but then when he was hanging out in his stroller, he had a big sneeze sneak up on him...I'm confident he broke something, likely a rib.  Because of Isaiah's upcoming surgery, they didn't want to give motrin bc that surgery is getting close so they first gave Tylenol to see if that would work.

Ever break a bone? Did Tylenol help?

I know from past breaks that Tylenol doesn't do a thing for Isaiah, that Motrin/Advil is the only over the counter medicine that can help...but since it's a blood thinner, I understood not wanting to go that route right away.  But two hours after the Tylenol and Isaiah was still a mess.  He would only stop crying on my shoulder. When Dr B came by, he saw he was still in pain and called Isaiah's neurosurgeon, Dr C, and he gave the ok to give Motrin. 20 min later Isaiah was passed out asleep- in the bed (instead of on my shoulder), and he was out for an hour and a half.  He ended up sleeping through his treatment finishing for the day, and thankfully the nurses let us stay and let Isaiah wake on his own since they didn't need the bed so he was able to get a good consistent sleep.  We're grateful for their kindness there for sure.

He woke up much more like himself.  Smiling once we were on the move. Hungry.  Happy to see Mickey again (I had put Mickey on the iPad soon after he sneezed and he wouldn't calm down.  That right there is an indicator of his pain. If mickey can't calm him, it's bad.). 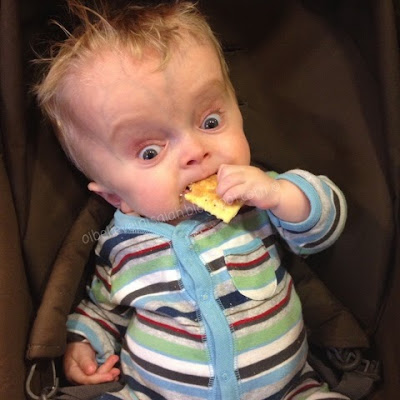 Peanut butter ON crackers? My two favorite foods in the whole wide world! Mind-blowingly good, momma, you're a genius.


We had an appointment with Dr C before heading back to the McDonald house for the night.  He went over some of my questions about the surgery that I'll share once we're home and I've had some rest. For now, we have another day of Pam to get through and a sleep study before that can happen....here's hoping for quick healing for my big boy...

Posted by OIbelieveinIsaiah at 4:26 PM