It was a little over a month ago that I admitted that I was doing Isaiah a bit of disservice in terms of his eating, so today I am here with an update.

I just realized I don't have any current pictures with how well he is doing with a fork, so here's the one I posted a month ago after reading and trying some great suggestions. 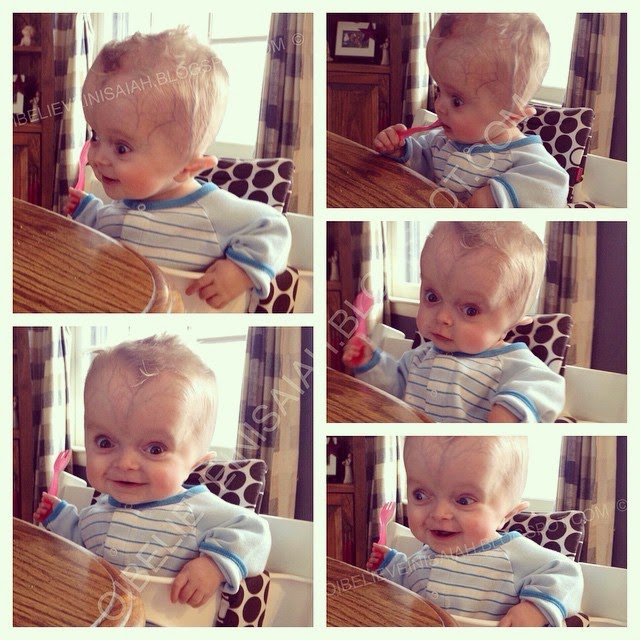 Although we fill his fork, we don't hand it to him.  We put it either in a bowl or on the table and it's his job to pick it up and put it to his mouth.  He's rocking it.  His OT was impressed with his new skill of using a utensil, and said it's typical to first start out by putting the food on the fork for a little one, so we're happy with the progress.

Isaiah has made HUGE progress in drinking.  He has been doing well for some time with holding a sippy cup when laying down, but it was tough when sitting up.  We had been tipping the bottom of it for him but we learned that there's a fine line of helping him with this task; if we offer too much assistance, he takes advantage and won't even hold the handles.  We learned if it's too full, he can't lift it, but if it's not full enough, he can't get the water to the mouth piece.  Ice helps balance the issue nicely.  It also makes him happy because of the cold temperature and because it's fun to shake. ;-)

But recently, he doesn't need us anymore. 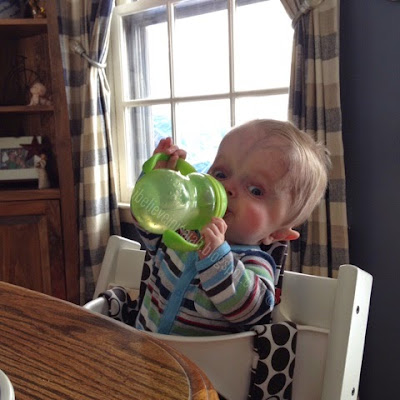 And happily, he gets annoyed if we help!  Hooray independence!  For real!  For real!

He still needs help with things like yogurt, apple sauce, and pudding, ...basically anything on a spoon, but if it's in a packet, he's starting to get it on his own! 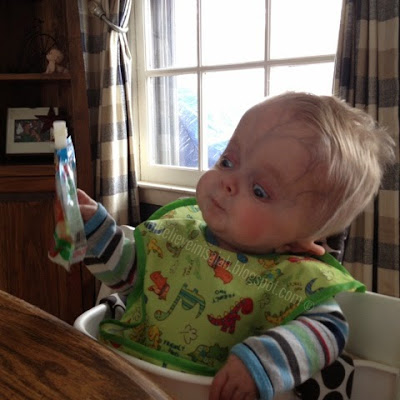 We do have to help squeeze, but guys, he's even learning to suck the tip of the puree pouch!  Like a straw!  FINALLY!  This is something we've struggled with for months.  I stopped pushing it at 13 months because honestly he didn't get it, he wasn't ready, and we were all frustrated.  We backed off and once in a while, if he was refusing the spooned puree (he's still finicky about fruits as table foods.  he LOVES them pureed, but hates them as table foods.  We think it's a texture thing.  It'll come in time.), we had put the packet to his mouth and he'd take it that way.  But lately, he's taking the packet himself and foregoing the spoon.  And it's awesome.

We've still been struggling with finger feeding.  He seriously would throw 99% of what we offered to him on the table. I tried a mat and he'd throw the food from it and then throw the mat.  Nothing would go in his mouth.  Nothing.  This week I introduced to him to one of our suction cup bowls and um, WHY DIDN'T I DO THIS SOONER? 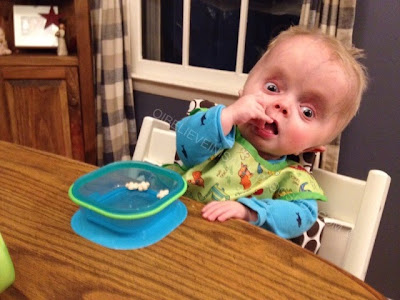 I'm mostly able to put a pile of finger foods inside of the bowl, and although he still sometimes pitches it behind him, he's more likely to put it to his mouth now than ever before. 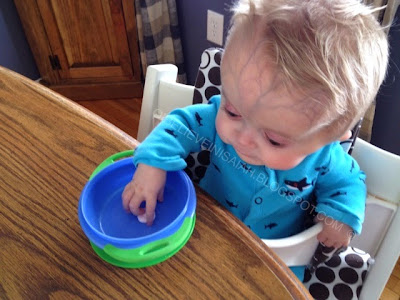 So that's my long-winded update on Isaiah's eating.  I am starting to work on a few posts about WISHBONE DAY! (woot woot!), Isaiah getting mobile (ahhh), and t-shirts.

Did I just say t-shirts?

Why, yes. Yes I did.
Posted by OIbelieveinIsaiah at 10:07 AM