Isaiah and I spent the afternoon at a local farm show this past Wednesday.  Although his arm is still wrapped from breaking last week, life must go on.  As much as I want to give him time to relax (and I have! lots of time!), I also want to show him that the world doesn't stop because he has a break.  I want to show him that he can live his life, happily, just sometimes with a splint.

I was a little nervous bringing him to the farm show since I haven't been to it (or any farm show) before and didn't know what to expect.  Except animals.  I knew there'd be lots of animals.  And food.

It took some time for me to figure out where I was going, but I quickly found my way to the animal barns.  There were so many cows! Isaiah was very entertained, but I didn't take any pictures because I was quickly flying past them.  Seriously, their tushies were all facing us and I know certain things shoot out of that end and I did not want to be on the receiving end.  You know it would happen.

The alpacas though, they were facing the correct way... ;-) 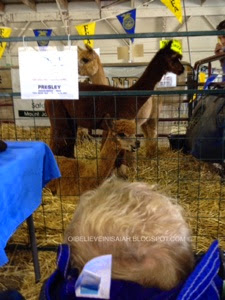 Look at that short one in the front, he's smiling for Isaiah!

They had a petting area for the kids; there were these adorable little tables for kids to check out ducklings and rabbits, but I didn't feel comfortable enough (with the excited toddlers around) to bring him super close... but I asked one of the young guys if they would be willing to show Isaiah one of the not-so-energetic rabbits, and he very nicely obliged. 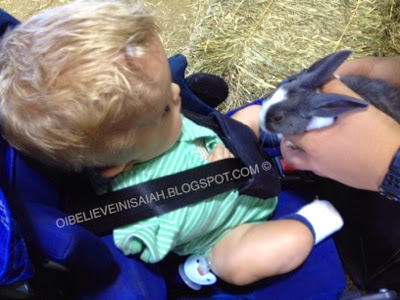 Isaiah went to reach for him, but I was quick with my "don't pull" direction (something he is learning with Carl), so he was hesitant.  He did pet the rabbit's ear eventually...(mean mama!)

Once done discovering rabbits, we checked out the miniature horses.  I sat there neighing like a whackadoodle while he stared and laughed... 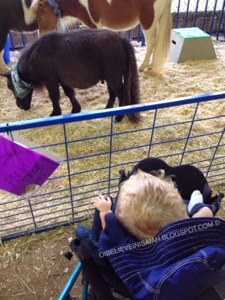 Then the goats started yelling.  Apparently that was the coolest thing ever.  It inspired him to add a word to his vocabulary...goat.  It may sound similar to go, but I assure you that it is goat. ;-)


Once we were done visiting the animals, Isaiah and I went to check out the food.  He hasn't been a big eater since he broke his arm, and he ate lunch before we left the house, so I looked for a perfect dessert. 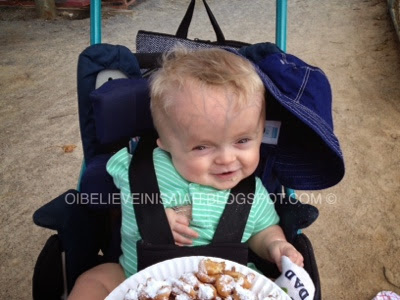 This smile?  After his first bite...and then... 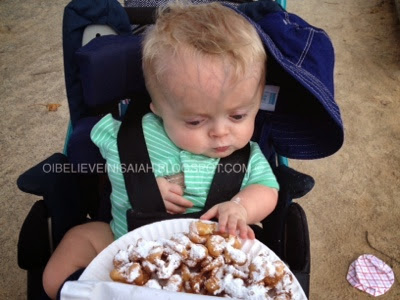 I thought it best to end on a good note, so we left after the funnel cake.  The adaptive stroller needs a bath after it was attacked with powdered sugar, but it was worth it.

Along with funnel cake, Isaiah had his first peanut butter sandwich on Wednesday. 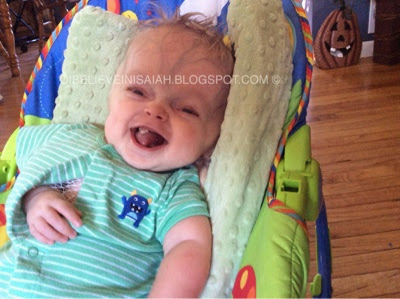 I think he liked it.  Maybe.  Also, I think he's getting his appetite back...and that means he's feeling better. ;-)  Hopefully we'll be splint-free soon! :)
Posted by OIbelieveinIsaiah at 7:00 AM