The last few days have been full of careful movements, lots of foam padding, and even some smiles and laughs.  It's been lacking consistency in Isaiah's eating and his drinking.  That, combined with his fear/crying out whenever I would move him, led me to need to take him to DuPont.  Yesterday was Thursday already.  Isaiah's Orthopedic doctor only works weekdays and that weekend was looming over my head.

I called early yesterday morning and left a message for his doctor.  His secretary called me back and asked if I could come in later in the day.  I was hoping just to consult with him over the phone and for him to tell me how much I rock and not to worry about coming in...but alas. ;-) 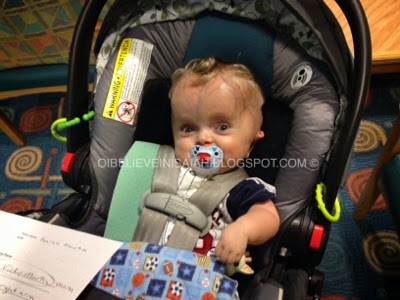 We made our way to DuPont for an afternoon appointment.  Pictures were limited because I was overwhelmed...although I did have help (from my awesome sister)...I have had yet to actually process all of this and I think it was starting to hit me.  My stomach was killing me.  My head is spinning with precautions, with questioning myself,  and this decision to bring him in.  My agreeing to take him meant I was trusting others to touch him, possibly help me re-splint him, x-ray him...or it meant I had to fight to keep people away from him.  It's a constant battle in my head of reading people and figuring out who thinks before they do things and who thinks I exaggerate how severe Isaiah's OI is.

While waiting for the doctor on the table, Isaiah stopped moving his right leg.  When I touched it, he flipped his lid. 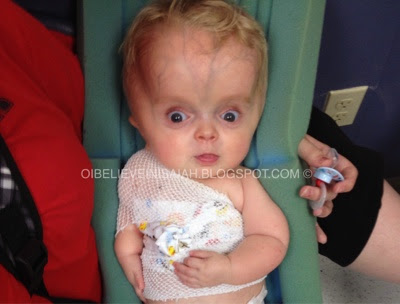 I wasn't convinced it was broken...but I wasn't convinced that it wasn't.  When the doctor came in, Isaiah response had him concerned about both limbs on his right side, so since we were there, we went off to x-ray to get pictures of both his arm and leg on the right side.

Reason number 631 of why I love DuPont.  Isaiah's doctor met me at the x-ray area.  He told the tech in person not to touch Isaiah and to listen to me.  Smart man. ;-)  The tech wasn't too thrilled with the x-rays she got, but they were good enough.

The x-ray confirmed a break in Isaiah's upper arm; you could see a clear break right above Isaiah's elbow.  The doctor told me he'd then meet me down in the cast room to get working on a splint. 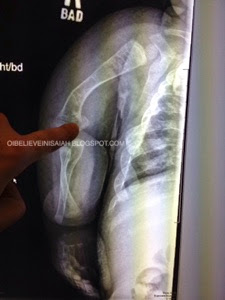 We made our way down to the cast room (I carried him on his old mattress while my sister brought the stroller and our pile of stuff.) and got reintroduced to a number of staff members there.  (We had first met them when Isaiah was in the NICU.)  The doctor met us there and wanted us to splint with foam (as seen below)....but well, he was already a sweaty mess, foam wasn't going to help the situation.  After a lot of problem solving, the staff and I agreed that the way I splinted was best since it was so breathable.  They asked about the product, called Surgilast, and called down to the supply area and luckily they had some!  We waited a bit for it to be delivered. 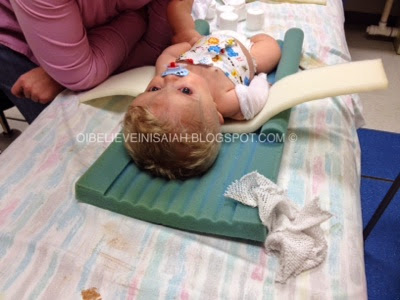 Meanwhile, Dr. B stopped in to check on Isaiah and showed me the x-rays, saying the bone "collapsed" on itself.  That just sounds painful.  And terrible.  And makes me want to cuddle Isaiah every second of the day...but I can't, because cuddling hurts him right now.  :(

Along with that awful description, he had some good news about Isaiah's femur.  There was no break seen on the x-ray...but even better than that was how that bone looked in comparison to when he was first born.  Isaiah's femur used to be shaped like an M.  It was so compact, short, and very deformed.  Yesterday? That same bone almost looks like a typical bone (to me), with a curve still, a severe curve, but nothing like a year ago.  I should have taken a picture to show you; it was amazing!  It was straighter (for lack of a better word) in the middle.  And so much longer!  We can thank pamidronate (the treatment that Isaiah gets) for that. 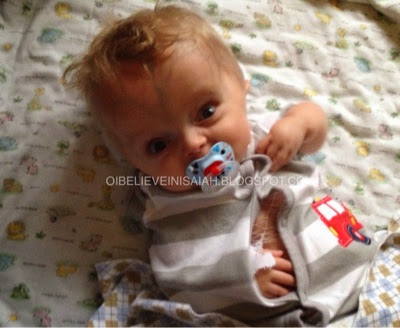 Today Isaiah is continuing his medicine regimen and we are taking it easy.  The doctors said that babies heal quite a bit quicker than older children/adults, so they predict he'll be wanting his arm back by the end of next week.  Given the break, I doubt I'll be letting it free, but I am grateful to know that hopefully the pain will end quickly.  Hopefully we'll be back to our normal soon.

Thank you for your continued love and prayers. <3
Posted by OIbelieveinIsaiah at 7:59 AM