On Friday, Isaiah had his pre-op appointment for his surgery that is scheduled for next week (unless it decides to snow again...to which I will shake my fist at Mother Nature).

Dave had to work, so my sister came and stayed overnight with us and accompanied Isaiah and I to DuPont! 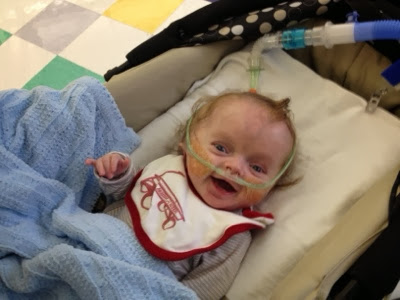 Which obviously made Isaiah a happy camper. :)

For the most part, he was extremely pleasant at the hospital.  He had a bout of the grumps when I was too slow getting his bottle together before his appointment (it didn't help that it wasn't as warm as he prefers either), but once I found a way to give him his formula warm, he was good to play peek a boo again. 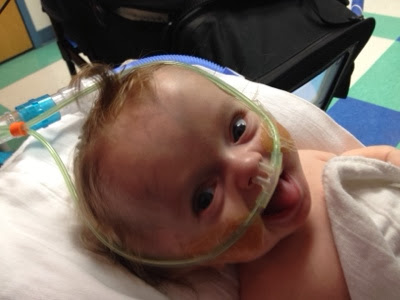 Pre-Op was really just a lot of questions.  A nurse practitioner listened to him.  She asked about his C-PAP machine and let me know they'd have everything he needs for that in surgery.  A nurse went over the timeline for when to stop his eating before surgery....basically everything we already knew because we did this last month for the last surgery that we cancelled due to that crazy snow storm.

I showed them his drool rash that has developed.  I've been putting Aquaphor on it day and night and trying to minimize pacifier use as much as possible, but sometimes.... 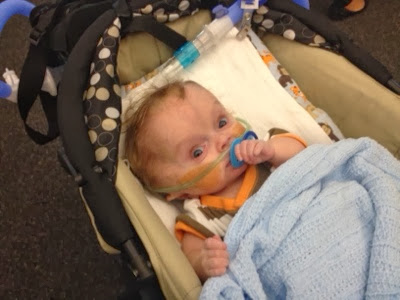 He just needs it to chew or suck on.  They told me to keep doing what we're doing, and hopefully it won't cause any headaches when it comes to putting in Isaiah's port.

The appointment lasted over 2 hours because we had to sit and wait for the nurse practitioner to call anesthesia and ok things with them, and then for her to call Isaiah's pulmonologist to make sure his "respiratory situation was good to go".  They did not approve things due to the fact that he hasn't seen them since before Thanksgiving.  So, we're taking a bonus trip to DuPont on Monday to get everything squared away.  I was pretty annoyed at the thought of taking an extra trip (Given this wasn't a factor a month ago), but the more I thought about it, the more hopeful I am about the appointment.  Isaiah has gotten so strong, he's improved so much.  Maybe we'll get to chat about a future "good-bye" to the Trilogy?  We're not getting our hopes up, but it's a pretty nice "maybe" to think about.

Anyways, after our pre-op appointment we had lunch in the cafeteria and then it was time for Isaiah's swallow test, the test that will decide if Isaiah is ready for solids, but I will save that big appointment for the next post.