Isaiah has become quite the fantastic eater.  Remember when I was so thrilled when he'd eat a "whole ounce"?   He had been averaging about 3 ounces a meal for the last month and a half but honestly, if I averaged the last 2 weeks, he's up to about 4 now. 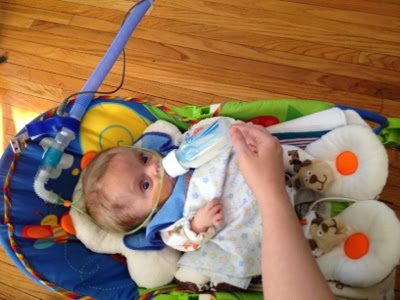 He's pretty consistent, wanting to eat every 2.5 to 3 hours during the day and about every 4-6 hours overnight.

Isaiah had been doing well, and then had a bout for a week of eating less and acting grumpy.  He was arching his back, crazily nodding/shaking his head, coughing while burping, and just so grumpy.  It took me 3 days of it before we realized "duh, reflux!"  He has been on reflux medicine since October and we had only increased the dose once since being home, so I contacted his doctor and he immediately increased Isaiah's dose.  It took about 3 days before Isaiah got back to his Porky Pig self, but he got there. 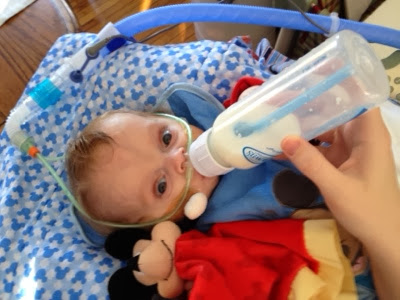 Since then he's only increased his intake, going from an average of 20 oz a day to 27.  I know he's still not eating as much as a typical kiddo, but he's eating what's enough for him, and we know that because he's happy and his weight continues to gradually increase. 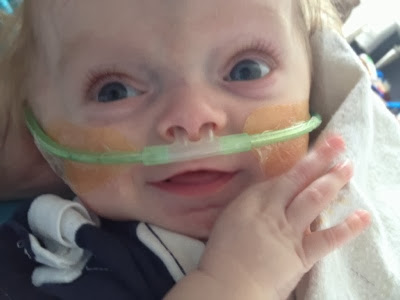 Now that Isaiah is six months old, we want to start trying other foods with him.  Before his pediatrician will ok this, he has to have a swallow study.  We have to go to DuPont for this.  Initially his appointment was scheduled for April.  To which I replied, no stinking way. :-P  I've learned how hospitals work, if you have other appointments they will do their best to stack them together since you're already in the building.  A very kind nurse from his pediatrician was scheduling this for us, so I gave her the dates that we'll be in DuPont (which is a lot- we have a pre-op appt, his surgery, and PAM all in the next 3 weeks) and she called them back asking if we could schedule along with those.  It was no problem!  We're now scheduled to have his swallow study done at the end of this week, after his pre-op appointment.  Hopefully he does well with this so that we can move on to trying solids.  You know if he passes that we'll be bringing him right to Giant with us the next day and finding foods for him, right? Mom, you're doing it wrong. This is not how babies eat solids.

Anyone have any suggestions for what to get?  Obviously we've never done this before; we do have OT working with us (which we're at a stand still with until we get the results of the swallow study), but I'd rather feel less like a moron with this exciting change.  We know to try veggies first, and we know to try one once and then give him 2-3 days before trying something else in case of allergies.  And obviously we know to video tape his first bites. :-)  So, advice? Favorite brands? Thoughts? (HELP lol)
Posted by OIbelieveinIsaiah at 9:37 AM