This time, we're waiting to get back to "our normal".  Isaiah's is having a rough go of it post-surgery.  He's been breathing much faster than he has in months, his heart rate is higher, and he has a fever that was 103.5 at its highest point. 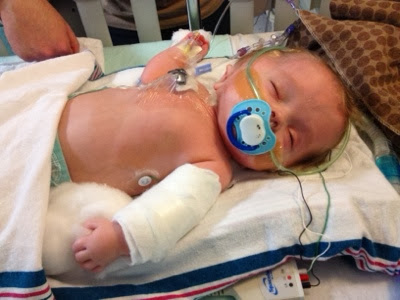 Here he is when we first saw him post-op in the PICU.  My poor exhausted, confused baby.

I'm dying for morning to get here so Dr. Bober can come see him and calm the staff of the PICU down.  The reaction he is having is normal for him.  He just needs time.

And food, darn it.  He's so hungry...but they won't let me feed him because his respiratory rate is so crazy high.

I'm panicking.  I'm so scared he's going backwards.  I'm so scared they are going to suggest/put an ng tube down him so he can eat and I really don't want to do that.  I want him to eat like he's been doing for 2 months.  Ugh.

Dave and I have been able to sleep here and there.  One positive of being in the PICU is that Isaiah has his own room which makes things a lot easier on us in terms of resting.  It's 4:30am now, and I'm awake because Isaiah is awake, and I want him to know I'm here with him.  We brought his projector from home, which has been a great comfort to him.  He stares at the projection on the wall and you can tell he sees something familiar.

His temperature has dropped a degree since its highest point at 10pm.  Hopefully his temperature keeps dropping.   Hopefully he continues to get back to his normal and they allow me to feed my baby soon.  Hopefully time flies this morning and he can see his doctors and they can develop a plan from this point.  Are we going home today? Tomorrow? After Pam?

I'm so grateful we are in a hospital with many staff members that understand OI and will help me teach the few that don't.  Right now I'm pretty sure I'm being seen as a crazy mom, but once they hear from his doctors....I know it's going to get better.  It's why we bring him here. It's why he's safe here.