I'd be lying if I told you Isaiah wears his helmet 23 hours a day, 7 days a week like he's supposed to.

But we have good excuses. 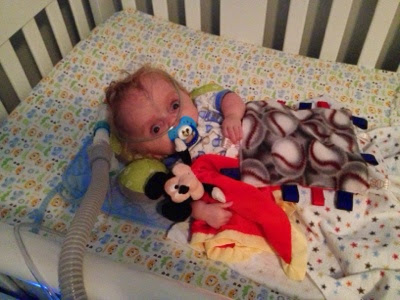 He can't wear it with the c-pap unless we want to give him a nose job along with the head reshaping (the cannula pulls on his little nose).  (This could change after our next appointment with his pulmonary team in a few weeks.  Fingers crossed!)

He had to have it off during his latest Pam treatment because of the way the nurses checked his temperature.  It read too high when he was wearing it which could have been a concern (a fever could be a negative reaction to the pam or a sign of an infection in Isaiah's port).

Then he had to have it off because of the suspected compression fracture.

And now he has it off due to his 100 degree fever thanks to another ear infection.

It's a shame, because he's so darn cute in it! 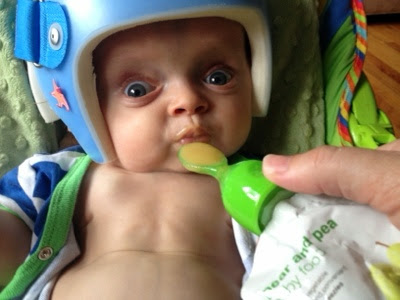 (Not that that's important. It's just a perk.) 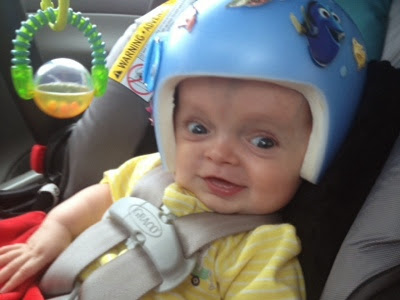 Anyways, even with it off, the shape of Isaiah's head has improved.  We had a check in on Tuesday at Lawalls in DuPont and they removed a layer from inside of the helmet.

This time the difference was only 4/8"!!!!!  He's almost there!  Once he's down to 2/8" difference, he'll likely be released from needing the helmet!

So even though he hasn't been wearing it as he should, he's made remarkable progress in a short time. The bulge on his right side is so much better.  The back of his head is so much rounder.  We know it's thanks to his new love of laying on his right side, sitting up in his chairs like a big boy, and his small amounts of time in the helmet...but we'll take it. 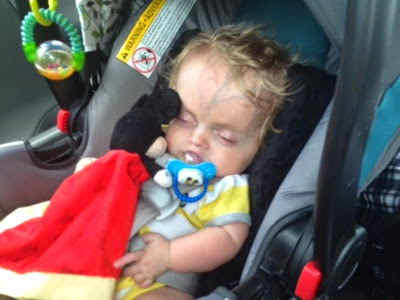 And now to get over this ear infection and back into the helmet...Happy Friday all!
Posted by OIbelieveinIsaiah at 7:00 AM