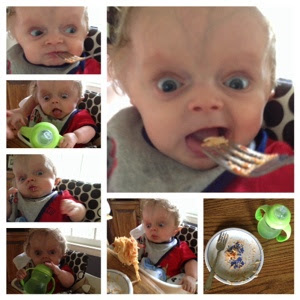 Recently meal time has involved some tantrums.  Isaiah seems to be getting frustrated by what we're offering him.  When I hold him while I'm eating, he often will grab my fork (or hot dog) and put it right to his mouth.  He feels he's ready but we aren't quite sure so we're taking baby steps.  Most babies are probably eating table food exclusively by this age, but remember, he was on a feeding tube until January. He has some issues still thrusting his tongue (this means he sticks his tongue out when eating); this thrusting needs more improvement before we can give him most table foods.  When we try table foods, his thrust causes him to push the food back out, but it could also cause the food to go right to the throat...without being chewed.  Not a big deal right now given that I'm giving the tiniest bites (of soft foods) in the world...but clearly this could be scary.  Who wants to perform the heimlich maneuver on a severe OIer? Anyone? 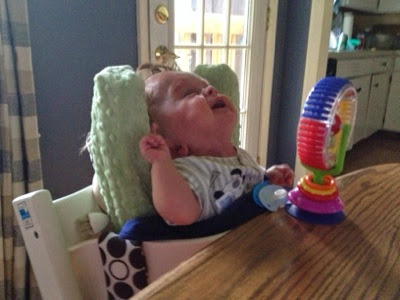 The tantrums can be a bit confusing because they sound extremely similar to Isaiah's "break cry", and they are extending beyond meal time.  His break cry is the cry we only previously heard when he fractured, so color us confused nowadays when he cries like this over everything.  Diaper changes, hunger, tired of the toys he's being offered, waking up, wanting to be held, loud noises....

Those are the most fun.  Just so you know, when you come to our house, there is no sneezing, no clearing of the throat, and especially no dropping things.  ;-)  Please don't drop things out in public either.  This message is to you, guy in Home Depot yesterday, who dropped something in the aisle next to us and scared the pants off of Isaiah (well, it would have, if he was wearing pants.).  Seriously, I think everyone stopped what they were doing to stare.  He was SO loud.  and purple.  and I swear his head spun completely around (Isaiah, if you are now 18 and reading this, I love you and your cry, but you are in an Exorcist stage right now and it can be kind of crazy.) 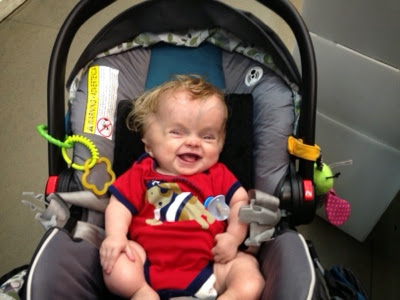 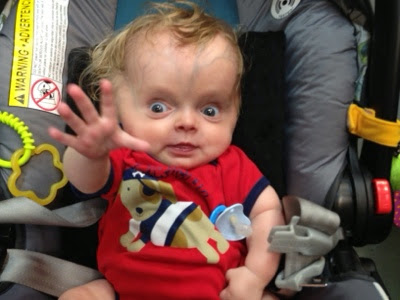 GIVE ME THAT PHONE!

With all seriousness, in regards to this new side to Isaiah...well, we're not tolerating it...or at least getting there.  Don't get me wrong, I still look him over while my heart is in my throat worried that it could be a fracture, but I'm slower in responding now and if I know he's just trying to get his way, I find other ways to calm him other than picking him up or just giving him what he wants.

Who knew temper tantrums would start before 1 year?!
Posted by OIbelieveinIsaiah at 7:20 AM