Isaiah had OT on Monday.  His occupational therapist comes every two weeks and works on helping Isaiah to improve his eating abilities.  Nowadays, she has me hold his mouth a certain way while he eats to avoid his tongue thrusting (which has improved greatly), works to give ideas on what to offer him, and just introduced a straw to Isaiah's life (so, more of mommy holding his jaw and making him mad teaching him how to suck from it). 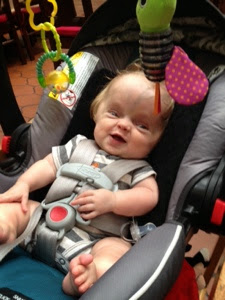 Since the spaghetti has gone so well, she thought mac and cheese would be a good choice for Isaiah to try and I was totally with her; he loved the pureed mac and cheese.  (Yup, pureed.) 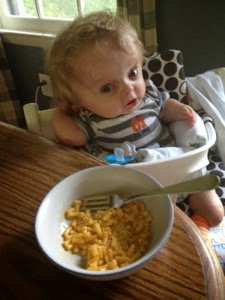 Yes, he is scratching his head wondering why I would offer this to him.  haha.  I really thought he'd like it, but he was not a fan.  I'll have to make some homemade mac and cheese and see if that goes over better because he was not having it. 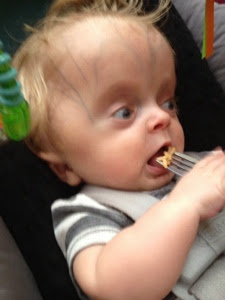 Although he will take more spanish rice from El Serrano...and refried beans...and pollo fundido (YUM), but like his mother, he gagged on the ground beef.

Tonight he ate some BBQ chicken and scalloped potatoes, but was repulsed by zucchini. 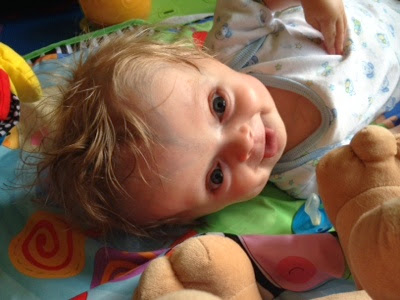 
I have a list of table foods to try, the veggies and such from soups, dinty moore stew, crackers...but...any more suggestions before we venture to the grocery story?
Posted by OIbelieveinIsaiah at 6:30 AM