I Don't Even Know

I don't even know how to begin explaining today....maybe one word.

Isaiah needs your prayers, positive thoughts, pixie dust, everything you can muster....and if you can spread some to my friend Jen too, I'd appreciate it.

Ugh. Isaiah is still having difficulty with his carbon dioxide levels.  Like I said in my last post, the staff is looking for his levels to be between 35 and 45; yesterday he was at 67 and then 64.

His level today is still elevated, but I wasn't given a number.

On top of this, he has a new issue.

When Isaiah came in on Sunday, they did an x-ray to check his ribs.  All looked good.  Today he was extremely agitated and de-sated again.  The staff started noticing he was working much harder to breathe.

Thus began the guessing game as to what has him so upset, what has him breathing so darn hard, and how to fix this all.

They tried an Albuterol treatment to open up his airways.

We didn't notice it help him.

They took another x-ray to check his ribs again and noticed that in that x-ray his lungs look different from the one taken on Sunday.  They look like something's in them....possibly fluid.

One possibility is that he is having a reaction to the pamidronate.  Respiratory issues can be a side effect of the PAM....but we should have seen that during his first infusion.  Dr. Bober has never seen side effects show up for the first time at the second infusion.  If this is what it is, it should clear up by Saturday.  If this is what it is, we'll know because it's possible it'll happen after his next infusion in 8 weeks.

Another possibility is that he aspirated from reflux.  We were starting to notice signs of reflux on Sunday evening.  We and his nurses voiced our concerns so the neonatologist on duty started him on Zantac yesterday.  This may take a few days to really kick in.  Because of the apparent presence of fluid, the staff has also put him on Lasix, which is a diuretic (and I'd say it's definitely working; this kid is now going through diapers and bedding like it's his business.).  They've also put him on a steroid that he receives 2x a day through a nebulizer.

And in case he's fighting an infection, they've also started him on antibiotics.

Now we wait and pray that he gets better.  Dave and I are glued to him trying to relax him when he's upset and just hoping he gets some sleep.  The little guy is so beyond is exhausted it's almost like he's too tired to sleep.

On top of all of this, he really had a busy day.  He had his repeat hearing screening...which didn't get completed because they weren't seeing anything different from the last time and he was getting upset with getting poked in the ears.  Now we wait a few weeks until he does the diagnostic test which is a 3 hour test.

He also saw his friends from pulmonology again and they ran a test on the way he breathes.  We're hoping to hear about the results from that tomorrow. 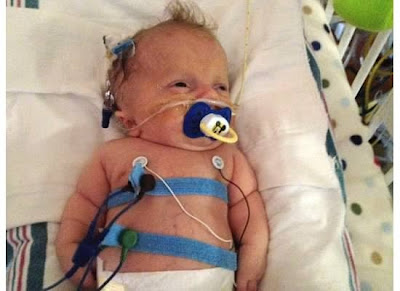 So like I said, prayers and love are appreciated.

Posted by OIbelieveinIsaiah at 9:34 PM