We did it.  We survived Isaiah's first fever.

Isaiah had his 2 month well-visit yesterday morning where he got attacked by nurses wielding needles.  I'm kidding, mostly.  I'm pretty sure he won't need counseling when he's older...

Here's Isaiah waiting to head out to his appointment of stabby doom.

Since you can't hold Isaiah down, we came up with a plan to have two nurses stab him at once. (Don't you love my wording?)  Dave held Isaiah on his pillow; he sat there hanging out with daddy when the nurses came on either side of him, counted to 3, and got him in both thighs.

I hate needles.  I questioned whether or not I'd want him to get shots...but reality is, these diseases are coming back and I don't want my kiddo having to fight something else that could be easily avoided with a little stabby stab.

But you know what was nice about the whole thing?  The nurses stood there making a plan for Isaiah's future.  They were talking about making sure we schedule our appointments on certain weekdays (so they are working) since this double-team worked so well.  I totally stopped them in the middle of their planning to thank them and just bask in the moment...even if it was about the very thing I used to pass out over.

Now, I did like the double team because at this stage in his life, he won't remember having 2 women come at him with needles...but it kind of scares me for the future (I want him to like women, give me grandkids and all jazz).  I don't want him scared of needles like I've always been; he's going to have to get them frequently with his PAM treatment.  I've heard of Buzzy, so I might purchase one of those in hopes that it will make this type of appointment easier on him.

Anyway, besides the obvious dull pain you get with shots, there's also some side effects.  The doctor warned us that Isaiah might get a low grade fever and be irritable.

He was good until about 14 hours after the appointment.  The home nurse woke us at midnight to tell us that Isaiah was really crabby and that his heart rate was high.   When I came out, I noticed he was warm.  We took his temperature and it was 99.  Dave and I both stayed calm because we were warned of this.

Since this was Isaiah's first fever, I did what any mom would do; I made myself comfortable in his space with him in my arms.  He literally wiggled his way so that he was completely cuddled up against me as soon as we sat down.  (Seriously, melted my heart.)  We sat that way for 3-4 hours.  He was in and out of sleep.  He cried a lot.  His heart rate never got below 170, but when he cried it went well over 200 (That monitor is a curse sometimes...you can't help but watch it).  My gut told me not to worry, that this was just a side effect.

When his heart rate stuck at 200 and his fever increased to 102, we woke Dave back up and had him call the pediatrician.  (I had spoken to an OI momma that works in an ER who recommended Motrin, but with the nurse, I had to make things official with Isaiah's doctors).  The doctor recommended Tylenol since Isaiah is only 2 months old, so Dave followed doctor's orders and ran out to the store for it at 4am.  Once he had that in his system, his temperature dropped back down to 99 and he was finally able to sleep.

Then I was finally able to sleep.

Isaiah's temperature is now 98.2.  It's 11am; this house is full of a tired, recovering baby, 2 completely exhausted parents, and a sleeping cat that is curled up and snoring in the sun.

I'd say we had a normal night with a newborn.  I'll take it! 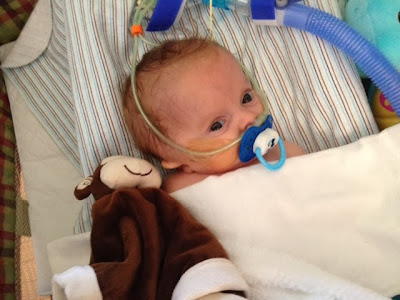 Before his appointment yesterday, I took a bunch of photos of us getting Isaiah ready for a trip out of the house.  Once I've recovered from the loss of sleep, I'll put together a post about how we get around town.  So expect that post in about 18 years. :)


Posted by OIbelieveinIsaiah at 11:25 AM