We were back to the Magic Kingdom on our 5th day.  Our 5th day was Dave's birthday! (Sorry if I am confusing anyone.  We are home now.  The posts that I put up about prepping/Father's Day were all written before our trip and published while we we were away to give us family time.) 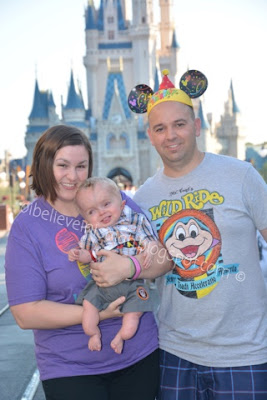 So, along with the amazing surprise for Isaiah from my wonderful scrapbooking friends, Dave also received a package on our first day of the trip; it included these awesome birthday Mickey ears, a ton of chocolate bars, lollipops, and even a Vinylmation.  This gift came from Disney!  I had called Disney Vacation Club before our trip and told them we would be down there for Dave's birthday.  I explained that Dave plans 99.9% of our Disney trips and that he is such an amazing guy...the woman I spoke to said they'd put a note on our reservation and that amazing package is the result!  Isn't that super sweet?

Along with that phone call, I also emailed who I thought was the manager of the restaurant (Crystal Palace) that we were planning to have breakfast in on Dave's birthday (thanks to Tom for that email!)....she had a note put on that breakfast reservation and Dave was surprised with a signed birthday card and yummy cupcake! (Disney, you rock. Thank you.) 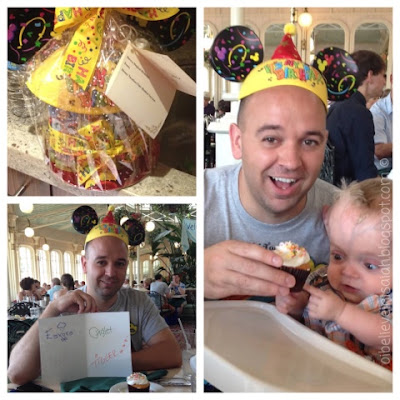 We had a great time with the characters from Winnie the Pooh....and Isaiah enjoyed his bacon, pancakes, and puffed french toast (if you ever eat at Crystal Palace, try the puff french toast. YUM...also, I should mention he had already started the day with a fruit/veggie puree, so all those carbs are completely ok. haha) 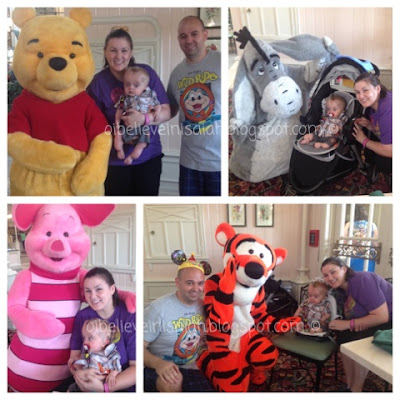 After breakfast, we rode the Haunted Mansion and oh my goodness did Isaiah love it.  He squealed, babbled, and giggled when we went down into "the graveyard" backwards...and getting on was great too.  If you've been to Disney, you know that a number of the rides have a moving sidewalk, which was intimidating.  Thanks to having our stroller marked as a wheelchair, the Cast Members had us go through alternative entries and offered to slow down the moving sidewalks if we needed that.  We didn't need a change in the speed but it was nice to have the option.  Also, it was nice not to have the other guests rushing around us like we'd typically experience getting on the rides.  We needed to go our own pace and Disney gave us that ability. 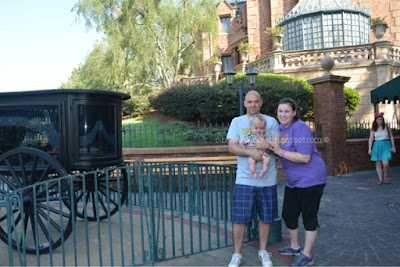 After our fun ride on the Haunted Mansion, we made our way over to Tomorrowland to ride Buzz Lightyear, Isaiah's favorite ride of the trip.  Oh my goodness he loved the laser gun and joystick that spun the car around...he couldn't take his hand off that joystick. 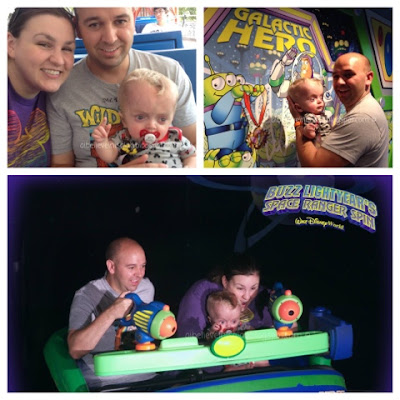 After Buzz, we went on the TTA.  Another favorite.  Isaiah was full of smiles whenever it would "zoom" off to the next destination.  Once we were done with the TTA, we checked out the Monsters Inc Laugh Floor, where I really wanted Dave to be that guy...maybe next time. ;-)

After a busy morning, we made our way back to the resort, stopping at the Confectionary to grab Isaiah a yummy snack. 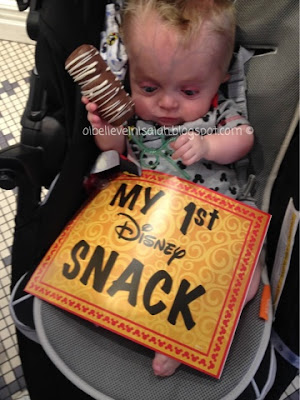 After that, a good long nap and late lunch, we headed to Animal Kingdom. 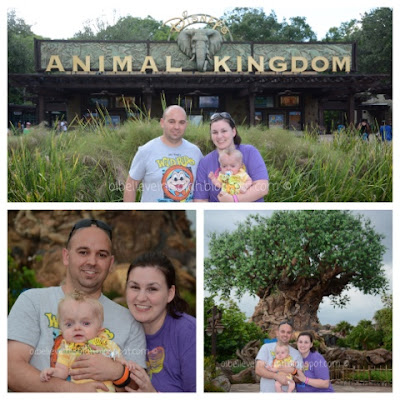 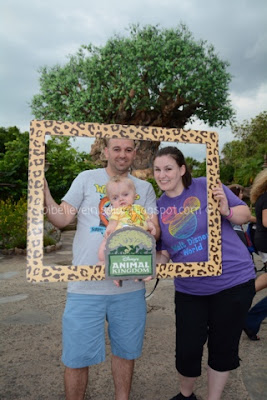 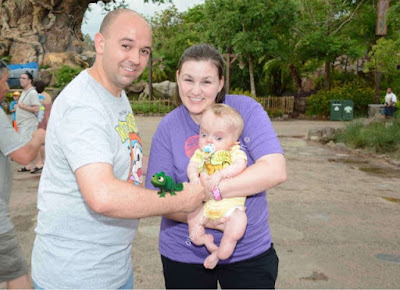 Look, it's Pascal from Tangled! :-P

We had fast passes to meet the Adventurous duo, Mickey and Minnie. 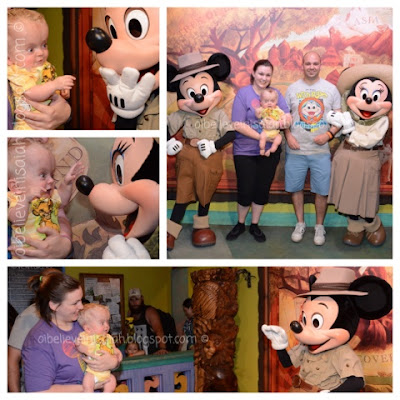 Minnie may have fallen in love.  She kept making hearts with her hands and blowing so many smooches...but my favorite moment was when we were going to leave... 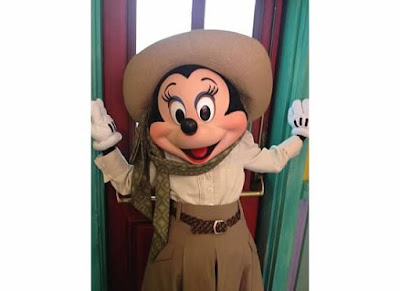 Once we explained that we had dinner reservations, we made out way to Yak and Yeti 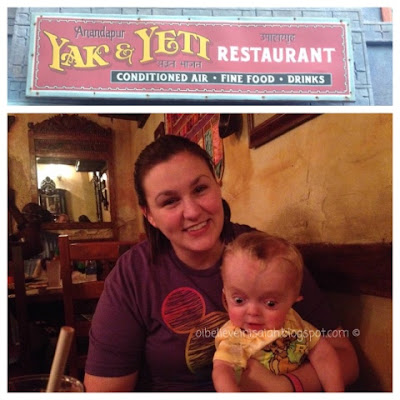 It was insanely delicious. Maybe we felt that way because we were hungry, but man on man, lettuce cups, egg rolls, honey chicken, BBQ ribs....all delicious!  And Isaiah ate over half an egg roll, and chicken and rib meat before going to his travel foods.

After stuffing our faces, we caught the Finding Nemo musical.  So cute! 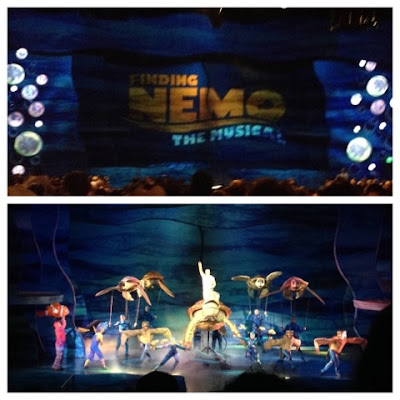 Once the show was over, the park was closing and it was time to head back for the night.  We thought we'd get a good night's sleep, but Isaiah decided it was morning at 3am that day.  Yup.  By 4am, I figured that he was just way too energetic so I took him to the lobby so Dave could at least get some sleep.  I laid him on a chaise lounge they have in the lobby and he just rolled around playing and yelling...all the while the cast members that were cleaning were laughing away at him.  (Disney never sleeps.  I learned that is when they polish the elevators and clean down the lobby.)  I'm glad some one found him cute at that moment.

With little sleep, we headed back to Hollywood Studios at 8am for what we called Disney Jr day.  We first had breakfast at Hollywood and Vine where we met Jake (from Jake and the Neverland Pirates.  Isaiah's second favorite tv show), Doc McStuffins, and Sophia the First!  Isaiah had a toy camera that is themed to Jake and when he saw it, he about died.  He started taking selfies of himself and cracking up.  So funny! 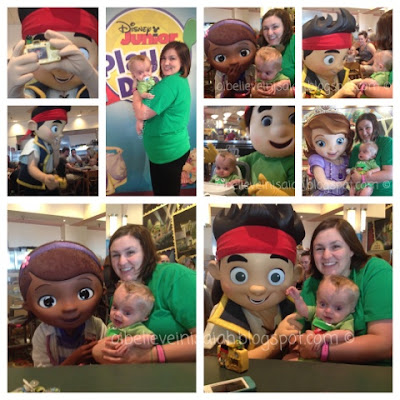 The picture of Doc with her hand over her mouth kills me.

After breakfast, we made our way to the Disney Jr show.  We were early and noticed that Jake was doing a meet and greet right outside (man, that Jake moves quick) so we had to jump in line to say hi again. 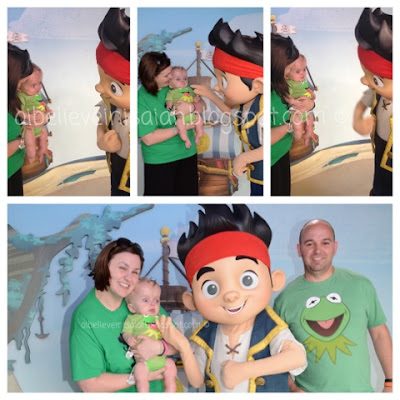 Isaiah giggled while I embarrassed myself yelling "YO HO" and "Ahoy Matey!".

After seeing Jake, it was time for the adorable Disney Jr show... 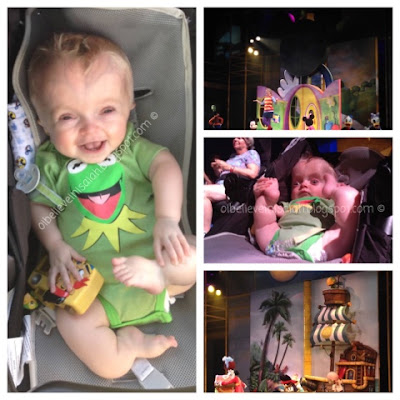 Isaiah's eyes were glued on the stage...and when it would snow, rain bubbles, or rain gold doubloons...on MAN! He was in awe.  It was so stinking cute!!!

After the show, we went back to our resort, had a little downtime and a looooooooong nap before heading to dinner at another resort/campground, Fort Wilderness, at Trail's End.  In order to get there, we took a ferry boat over Bay Lake. 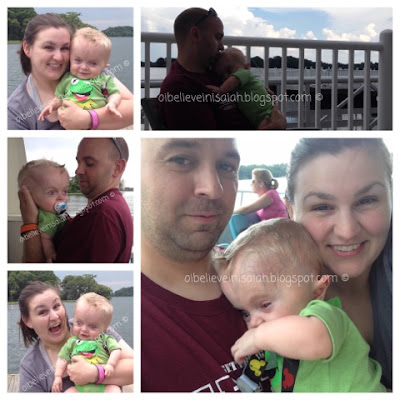 The food was insanely yummy and the boat ride back and forth was wonderful.

After some more down time, we decided that even though it was drizzling that it was a good night to check out the parade at Magic Kingdom.  We are so glad we did that! 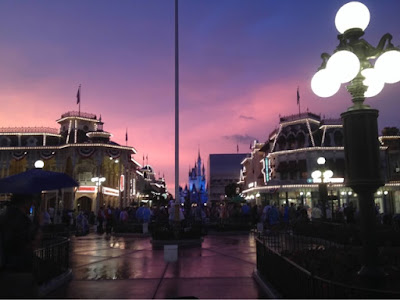 Thanks to the rain (oh, it rained on and all all afternoon/evening), Magic Kingdom really seemed to have cleared out.  We got an insanely prime parade viewing spot by the entrance and just took it in. 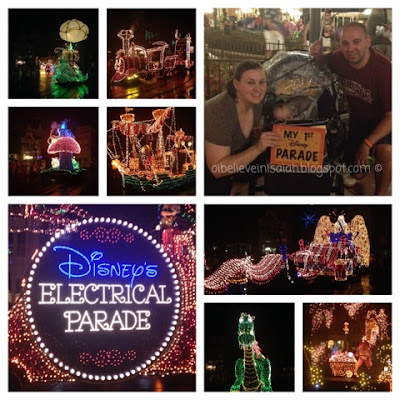 Isaiah loved the lights and took notice whenever a character or cast member would talk to him.  Cinderella blew him a kiss! 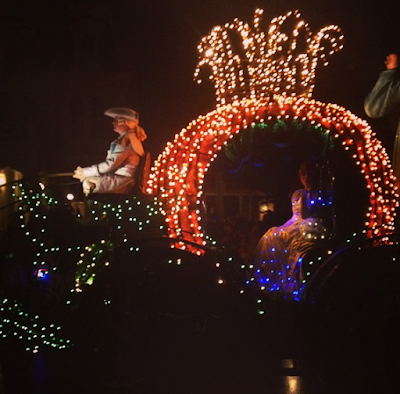 It's not every day that a princess blows you a kiss. ;-)

It was a perfect night for the parade.  The rain had brought in a cool breeze and all that exhausted Isaiah, which made for a great night's sleep.
_______________
Ok dokie, that wraps up days 5/6...half way through the trip!  Next week, I'll post about the rest of our trip (get ready for more pictures.  We seriously took over 2000.)
Posted by OIbelieveinIsaiah at 6:30 AM