The following post is something I never imagine having to write, because I never expected it to happen.  I've always thought to myself, "I will always be so careful.  Always."  I am about to be critical of myself and maybe you'll think I am being too harsh, or maybe you'll think I am not being critical enough given what I did happened.  If you know me personally, you'll probably be all "Vicky, critical of herself? Neveeeeeeeeeer" (Sense the sarcasm? Because I often am).  I will likely make silly and likely inappropriate jokes because that's what I do in a stressful situation- I laugh and make crazy jokes.

I kind of didn't want to share this.  I sort of wanted to hide the fact that this happened.  But this blog is about our journey with Isaiah and OI.  The good and the bad.  The happy and the scary.  It wouldn't be fair to me, to Isaiah, or to you if I hid this.

Also, I am an over-sharer.  Sharing helps me process things.


From time to time I have the same nightmare.

The kind of nightmare that makes me sweat.  It wakes me with a jolt.  It makes me shake and cry and pray it never happens.

It involves me dropping Isaiah.

And yesterday, at 1:30pm, when I was late to get Isaiah down for nap (and we were both feeling it), when I was hungry, when my mind was selfishly preoccupied, and I was trying to do too much at once... 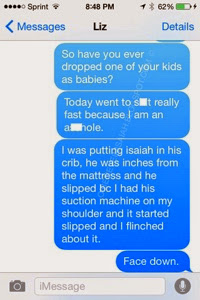 Yes.  I am scum.  I am an a-hole.  I absolutely loathe myself for this right now.  Not the kind of loathe in which I should be seeking help, but the kind where when all of the effects of this are taken care of/x-rayed/splinted, I will be eating an entire 1/2 gallon of ice cream.  And left over Christmas cookies.  And chocolate.  Probably a lot of chocolate.  Because that's apparently how I deal with stress.  I wish I exercised instead.  (I am kind of kidding.  I have actually been too disgusted to eat, but have anyway because I know I need to.  But there is a lot of deliciousness for me in the future when this is all in the past.)

I've been breaking down sobbing, shaking, reliving, and regretting.

I am pretty sure every parent has done something like this.  I mean, it probably doesn't usually include a flying heavy suction machine (WHY DID I NOT PUT IT DOWN FIRST????), but you know parents often drop their kids or almost drop them.

But those typical kids...if they were to have been dropped like I dropped Isaiah...those kids would be pissed off because they were sleepy and seconds from nap time (that they were overdue for) but they'd be fine.  Truly fine.  It was inches.  Maybe 6?  How many OI parents/OIers are horrified? Show of hands?

The worst part of it was that he landed on his front.  This is a kid who has to be prepped for tummy time and here I was throwing him into it while a flying suction machine was coming at him and then out of pure panic/instinct I picked him up from under his arms.  No other support.

WTF VICKY? WHAT WERE YOU THINKING? YOU ARE AN OI MOM.  YOU ARE SMARTER THAN THAT.  YOU KNOW ISAIAH IS SEVERE. WHY WHY WHY WOULD YOU DO SOMETHING SO STUPID????

See the regret I am feeling?

Now, I know this isn't about me.  You are likely asking WHAT HAPPENED NEXT? DID YOU GO TO THE HOSPITAL????? HOW IS ISAIAH??!?!?

Stop yelling at me with those capital letters, friends.

I carried Isaiah to our bed (it's a short distance).  He was crying.  It wasn't his break cry, it was more of a sleepy/panic/WTF just happened kind of cry.  In the process of moving Isaiah to the bed, I yelled at the top of my lungs (likely not helping things, because I am one LOUD woman) "OH MY GOD! DAVE! DAVE! DAVE! GET UP HERE I DROPPED HIM! OH MY GOD I DROPPED HIM!"  Luckily Dave was home (and on the phone, sorry to that wonderful loving woman that I probably made want to poop her pants out of fear of how I was screaming).

Can you imagine?  Poor Dave probably lost a few years in that moment.  Don't tell him, but I think he instantly grew some gray hairs.

He ran upstairs to us.  I quickly blurted and babbled out what happened.  He looked Isaiah all over.  Isaiah was still crying but we couldn't tell what was hurting.  Probably everything.  Because I dropped him.  Like a clumsy idiot.

Alas, he kept crying.  We noticed his one leg was pulled up.  We decided to give pain medicine.  In a panic, I called Dr. B to double check the dosage since he has gained weight.

Poor Dr. B.  Dave was in with Isaiah and I was in the kitchen shaking, on the phone, trying to get his bottle of meds.  "Hi Dr B.  It's Vicky, Isaiah's mom.  I dropped him..." and then I incoherently tried to explain that it was just a few inches, onto his mattress, but he's crying and we think he is hurt and I need to find out the proper dosage of medicine to get his pain under control."

And then he yelled at spoke sternly to me.  "Get yourself together.  Stop crying.  Cry later.  Isaiah needs you right now and I need to understand you...something something something..." My mind started fogging as I tried to calm down.

I explained again.  He told me he'd prefer to try Ibuprofen first, as he was afraid anything stronger could be dicey given Isaiah's respiratory history and the fact that I was worried about his rib cage.  Plus, we just weren't sure what could have broken.

We gave Infant Advil.  Isaiah fell asleep.  He woke though, about every 10-20 minutes, so I emailed Dr. B....he had Isaiah's orthopedic surgeon Dr. K call me.  I explained everything to him....by this time, Isaiah had really started to drift into a good steady sleep.  His heart rate was in the normal range.

It was an awkward time of day.  If we drove to DuPont, we'd likely miss those that would be the best of help.  We didn't want to go to an ER...that puts him at risk for too much.  After talking at length, we decided to wait until morning to go to the hospital.  Isaiah was stable, and hopefully after some sleep we'd be able to better pinpoint what was hurting him.

Around 4:30, Isaiah officially woke from his nap.  He was starved and angry.  We didn't want to try any of his normal seats for fear of hurting him, so we thought a pillow would be the best bet to sit him up, cushioned, so he could eat. 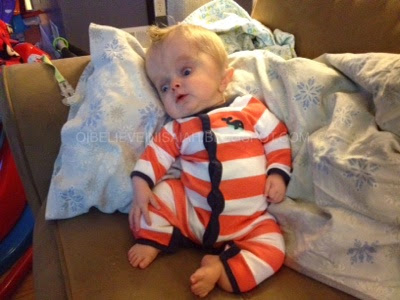 At first, he wasn't moving his left arm at all.  He was holding his right leg. (as you can see above...)  But after he ate, we laid him on the floor, on a very padded mat... 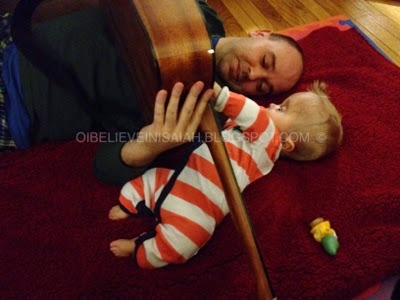 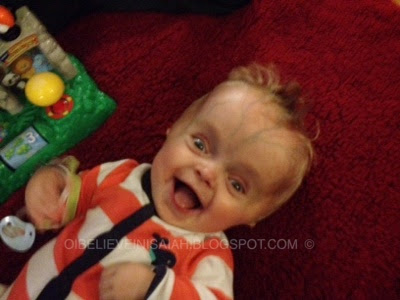 Isn't he amazing?  After everything he's been through today, he can still find a way to not only smile, but laugh.

After some time playing, we thought it'd be smart to give him a bath.  I imagine seasoned OI parents may be grinding their teeth right now. Why isn't he splinted?  We just aren't confident as to what is hurting and we're afraid to run to an ER, and nothing show on an X-Ray yet, and God forbid something does show and then we're dealing with ER staff about how to properly splint.

In our eyes, we just had to get through the night.  Get through a bath, which would feel good to Isaiah and give us another glimpse as to what hurts. 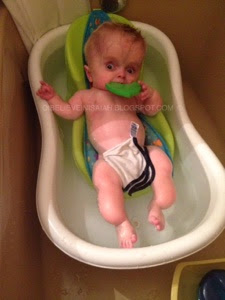 It was there that we noticed his right arm wasn't moving right.  That's his dominant arm and he's only moving it from the elbow to the fingers.  What does that mean?  His humorous? His clavicle?  His shoulder?

What about the right leg?  Is it puffier than it normally is?  It looks puffier...but he stretched it out...

Hoping we made the right decisions with how to handle this.

As for me...I feel responsible.  Yes, it's OI's fault.  But I need to take some responsibility too.  I need to pay better attention.  I love Isaiah so much.  How could I do something so stupid?

This is the silliest thing ever.  But the one thought I keep having is Why? Why did I have to write "It'll be ok, I promise" in my post on the Mighty?

This is the silliest thing ever but I swear I jinxed us.

I hope Isaiah is ok.

Please send up a prayer for him, for us.  For his pain management.  For his healing.  For our sanity. ;-)
Posted by OIbelieveinIsaiah at 7:30 AM