Thank you so much for your prayers and love for Isaiah's health!  Isaiah's fever broke on Saturday but he's continued to deal with some gross stuff in regards to his nose....he's really in a much better mood but I will likely be bringing him back to his doctor as soon as I can to make sure his sinus infection hasn't come back.  At least he's smiling again...we'd missed that smile. :) 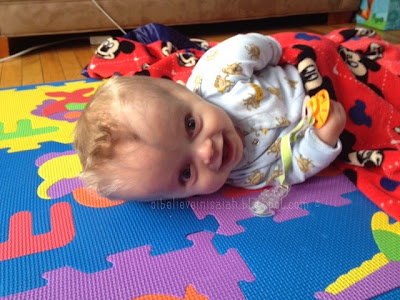 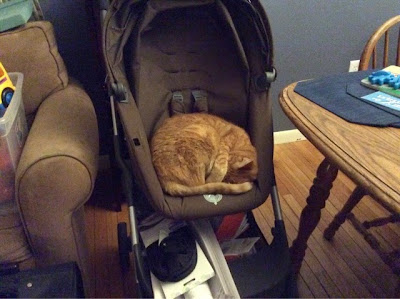 It was given to us by a friend of ours.  It had been donated to her but she didn't need a new stroller.  When she asked if Isaiah could use it, I thought "no way, he seriously has three strollers already".  He has his Graco that we use most of the time, his adaptive stroller, and we have his bassinet stroller from when he was a newborn (that we plan to bring out again as he gets bigger because it has a great toddler seat).

But it's a Stokke.  I know another OI mom who swears by her Stokke.  It sits up higher and supports her son well.  I had to try it, so I went back to my friend about it... 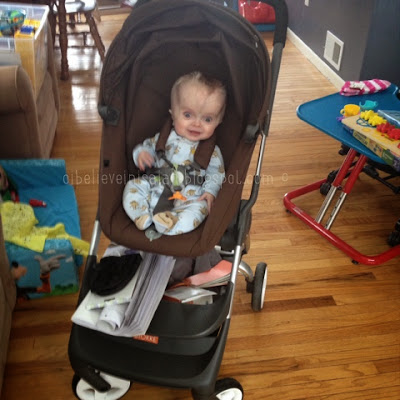 Holy moly, it is awesome!  It is easy to open and close and really does sit up so high!  You can flip the seat so that it faces out to the world or in toward the parent.  It will be great on DuPont trips- Isaiah will be able to eat at the table when we eat in the cafeteria or over at the McDonald House....it will also be great when we go out to restaurants (because that happens so often, ha, but I can dream!). 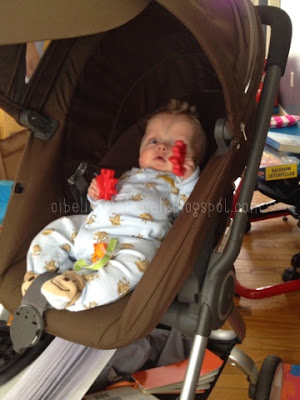 We've had it in the house for the last week, taking some time to get used to it before our next Pam trip.  Isaiah has played in it, eaten in it, and lounged around as well.  He's a big fan. 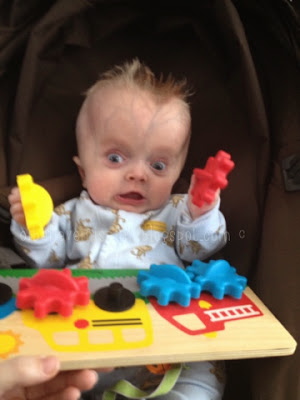 Hi.  My name is Vicky and I am stroller hoarder. 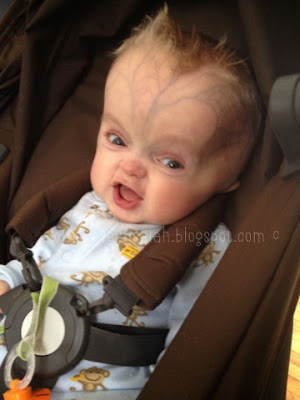 Is this not the cutest face ever? Ha.  It's like he's saying "ha, yeah she is a stroller hoarder."

I can't wait to show Isaiah's PT!  (I think she'll be thrilled with how supportive this new stroller is for Isaiah!)  Hopefully we'll have PT this week?  We haven't had a Physical Therapy session since the week before Christmas...between the holidays, Isaiah's breaks, Isaiah getting sick...it's crazy.

I also can't wait for her to see this in person: 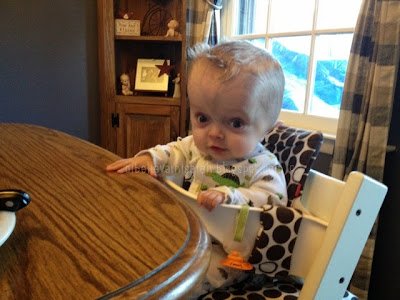 Isaiah has been sitting up every time he is in his high chair.  He has become so amazingly strong while doing it!  Just last week, he had been doing a great job sitting up but he'd flop back when he'd want to lean back but even that has changed.  Now it's just so fluid.  He's got it.  He can sit up.  He can pull forward.

He can only do this confidently in his high chair and adaptive stroller, but it's a great start!  He'll be sitting up in the tub or on the floor playing before we know it!

:-D
Posted by OIbelieveinIsaiah at 7:00 AM