Holy exhaustion.  The older Isaiah gets, the more pooped he makes me! Isaiah has been rolling up a storm and keeping me on my toes...but enough about that, I wanted to update you on his eating.

Bottle feeding continues to go well.  His intake varies from three to 6 ounces a bottle but so does the time between bottles.  If he only takes three ounces, he tends to eat 2 hours later, six ounces and he'll eat 3-4 hours later.  I've stopped charting his intake which really frees up some time for me! ha 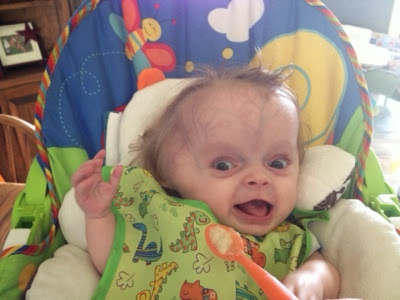 He really dislikes the textures of everything other than milk but he's made big improvements.  For example, he no longer turns purple coughing at the tiniest fragment of oatmeal on his tongue (however he downright hates rice cereal...with a passion... a crying, hissy-fitting passion).

I believe Baby Mum Mums have helped a lot with his progress. 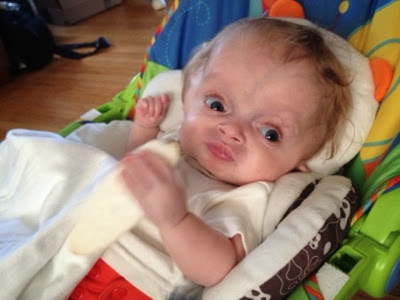 But you'd never guess that from the look on his face here! haha

He's really taken to chomping down on a Mum Mum or two.  He used to really dislike when it got soggy and would start dissolving in his mouth, but his reaction is much calmer than it used to be.  (It was pretty comical.) 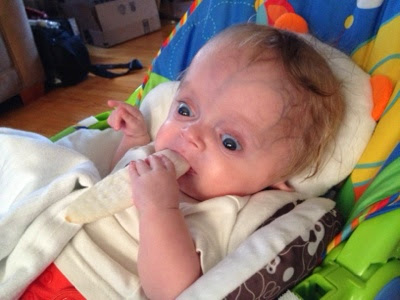 Even though I'm majorly cheating (his OT wanted me to strictly stick with the oatmeal or rice cereal), I've started dipping Isaiah's oatmeal in a fruit or veggie.  He was a huge fan of the apples.  He was ok with squash.  He was pretty repulsed by the peaches.  What I've learned is that no matter how he feels about the addition, he helps him enjoy the oatmeal more.  He eats at least a tablespoon when apples are involved, and although he eats less with other things (about 2 teaspoons each time so far), he's more likely to eat the oatmeal plain when I mix in the addition every other bite. 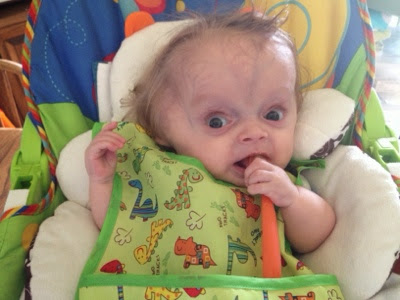 I've learned one secret that works about 60% of the time...letting Isaiah put the spoon in his own mouth.  He takes in so much more food and swallows it well if he's in charge of how much goes in.  (Bossy at 7 months old, I'm so in trouble.) 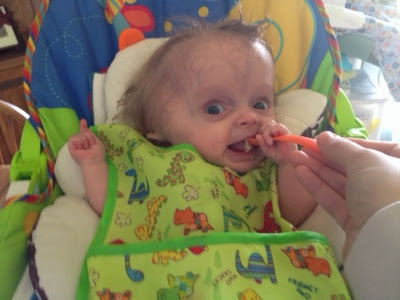 Whatever works, right?  I wish we were farther with his progress, but honestly, he was still eating by his NG tube just 3 short months ago.  Four months ago I was jumping for joy at Isaiah eating 10 mL (that's one third of an ounce).  Baby steps.  He is a baby after all... 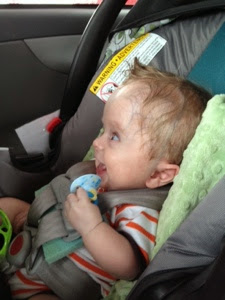 Not that he still looks like one.  Am I the only one who sees less of a baby and more of a little boy when looking at this picture of Isaiah?  He's growing up so quickly. #typicalmomstatement

He's going to be 8 months old this Friday! Geez! He'll be getting his driver's license before we know.

<3
Posted by OIbelieveinIsaiah at 7:17 PM