The older Isaiah gets, the tougher it is to get a moment to sit down and post to the blog! Sorry to those that only follow the blog, we're doing fine, but last week was a BUSY one!

Isaiah and I made a trip to Delaware for Pam (pamidronate- the medicine he gets to help his bones). 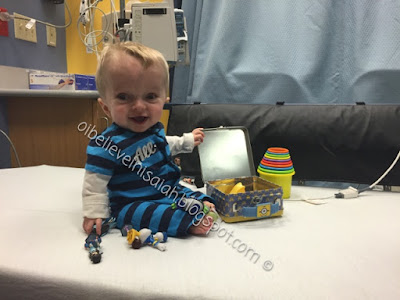 Honestly, it all went great!  He was such a big boy and handled having his port accessed (basically got an IV going but instead of in a vein, they use the port he had placed when he was 6 months old) like a champ...his medicine was flowing before we knew it and he was rolling around Day Medicine like he owned the joint. 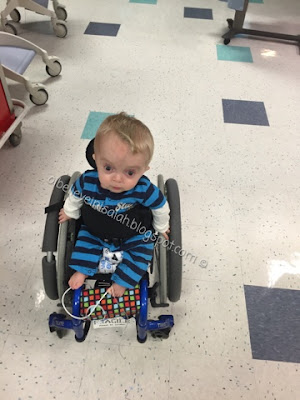 "Can you show me where the door is?"

Pamidronate is done a few hours each day over 3 days for kids Isaiah's age at DuPont. (That varies by doctor and protocol).  We normally stay at the Ronald McDonald House across from the hospital but since they are renovating right now, instead they helped us get into a local hotel about ten minutes away!  It was super convenient for us and the same rate as staying at the McDonald House.  They even had an amazingly generous welcome pack for us at check in at the hotel.  We were still able to have meals at the house if we wanted to and play in the playrooms...we had dinner and playtime both Monday and Tuesday night. 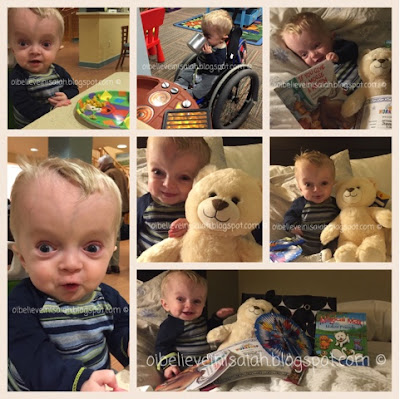 Here's a little collage of Isaiah at dinner, playing pretend in the Pirate Room of RMH,
and opening his Welcome box at the hotel.  He loves his new teddy bear named Steamer.

I think the only tough part was that the hotel didn't have any cribs available, only play pens...and King Isaiah does not sleep in a play pen...apparently....he had very rough sleeps when I tried to have him sleep in the play pen so instead he joined me in my bed. 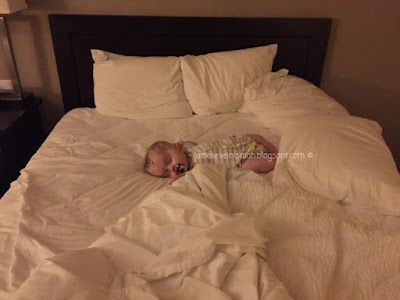 Basically taking it over.  HOW does such a tiny little boy take up a whole queen size bed?  Like that. (Picture above.)

Day 2 is usually our easiest day (since he's already accessed and doesn't need to be deaccessed), but it proved to be a rougher day than normal...we had a late start due to some technical issues with the pump and I had a mini heart attack at the end of his infusion but it all worked out.

To make up for a later exit than expected, we grabbed Isaiah's very first Happy Meal through drive-thru... 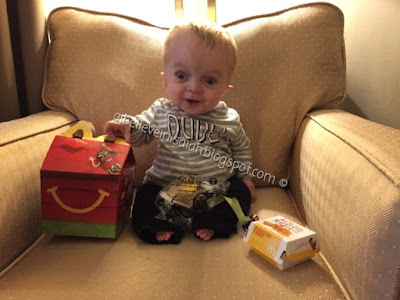 Our third and last day in Delaware started EARLY (6:45. at the hospital for breakfast.), we had an early morning MRI to check on Isaiah's shunt and hydrocephalus. 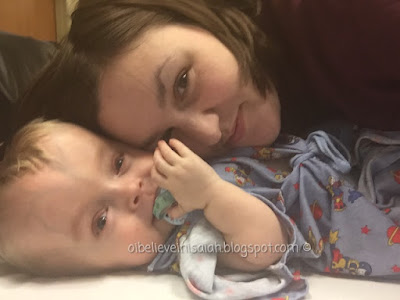 This was Isaiah's third MRI.  His first he had sedated, and it helped diagnosis his hydrocephalus.  His second was an unsedated fast MRI; I actually went in the tube with him. He handled it better than I did! This third one was similar to the his last MRI, unsedated and and fast....but he's older now, more observant...more nervous.  this time he cried and jumped whenever the MRI made noise and I ended up having to hold his chin so he didn't move his head all around...this time it felt a bit like torture....putting Isaiah through these things is so tough sometimes....I know it's our normal, but it doesn't make it easy.

Anyways, after his MRI we started Isaiah's last day of pamidronate.  We were (luckily) able to schedule a follow up with Isaiah's neurosurgeon only an hour and a half after the MRI (in the morning during pamidronate)...normally you can't leave Day Medicine when the medicine is flowing, but a nurse from the MRI area was able to help us and tag along upstairs. 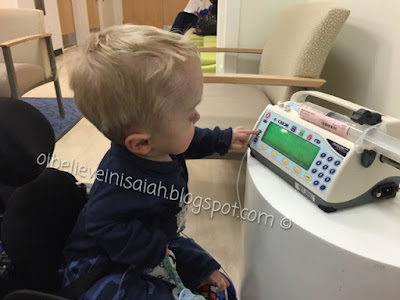 We met with the doctor who showed us the latest pictures...I made this little collage to compare...the first is not exactly the same view as the other two but it shows you all of the spinal fluid in Isaiah's head at the time (all the bright white). 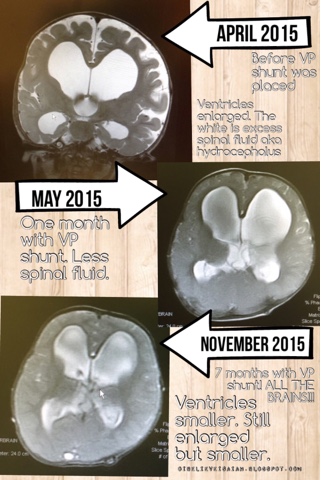 We're pretty happy with the results.  His ventricles are smaller but not too small (you don't want them to shrink rapidly from what I understand) and they are more symmetrical than they were before.  Progress.  Isaiah's doctor seemed happy with the results and this time we don't need to see him for another year (whoop whoop! no offense Dr C).

After our follow up, we made our way back to Day Medicine and finished up with Pamidronate, Isaiah was de accessed and we hit the road!

Thanks to being there early, we actually finished the earliest we ever have...and were home by 1:30!!!  We had a nice lunch and Isaiah was actually able to nap in his own crib!  Home sweet home, for sure.

The rest of the week was full of a visit from another OI family from out of state...and it was awesome!  Updates on that soon. :)
Posted by OIbelieveinIsaiah at 7:00 AM