The time has come.  Isaiah is two years old (27 months to be exact).  This is so very bitter-sweet but it's time to cut the bottle. 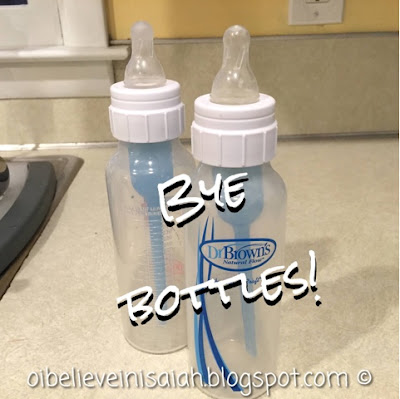 If you've just started following Isaiah, you may not know this, but in the beginning he was tube-fed.  He ate through an NG-tube (a tube that went through his nose down to his belly....and yes, we learned to place that tube ourselves...but I usually made Dave do it) until he was 4.5 months old...and teaching him to suck a bottle was not easy...but that day he finally took an entire bottle?  Amazing.

As amazing as it was....and is....he's now two and it's time to move to the next step...(because Dr Browns bottles are great and all, but they sure come with a lot of parts...plus, I'm worried that sucking the bottle is affecting his speech/teeth, so let's nip that in the bud).  The transition started some time ago, we cut bottles to only be before he went to sleep....but some nights he'd get a bonus bottle ever since he last broke his arm... 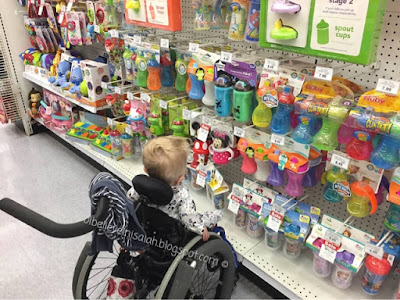 But, he's been healed for some time and it's time to just go cold turkey.  This weekend, we took Isaiah out to our local Babies R Us and had him pick a cup to drink his milk out of (instead of the bottle). 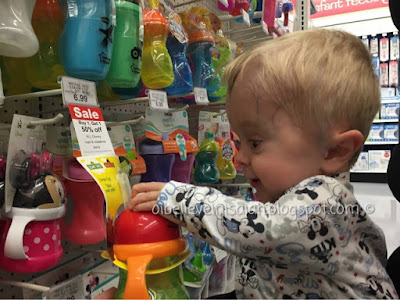 He spent a lot of time looking at all of his choices, but settled on a set of Mickey sippy cups ("Mickey! Mickey!") that were on sale (he has an eye for a sale tag; good job Isaiah!).  The sippy cups have hard tops, which made us question the decision, but we bought them anyway, since he selected them.

We talked all about being a big boy...and when we got home, we officially chucked the bottles. (Well, I may have hung on to them in case he gets dehydrated in this transition process, but he doesn't know that.)

Writing this post reminded me of how frustrated we were trying to get him to drink from the bottle...how some days it felt like he'd never take to it...but he did, eventually.  And he will this time too. :)